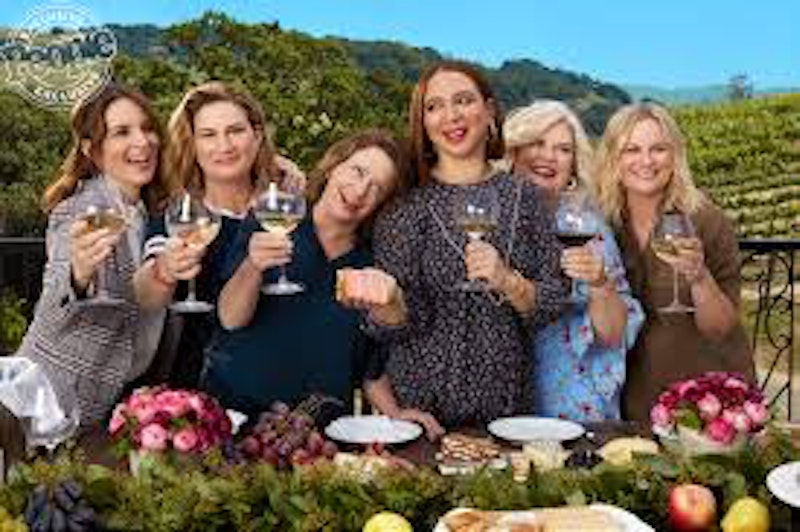 Tina Fey is somewhere at the top of comedy in America. She wrote Mean Girls and created 30 Rock. In a reflexively liberal culture, she has real wit and if anything is too self-deprecating. I looked forward to her Netflix movie Wine Country, only to see a humorless mess of a story about comediennes turning 50. They’re not taking it well, either as artists or as characters. If the miserable experience of watching the movie corresponds at all to how miserable it is to be in that situation—Napa Valley, the wine country in the title, will become a therapeutic resort for desperate women.

I watched how institutionalized comedy in Hollywood is collapsing on schedule. All the women in this movie, in front of the camera and behind, used to work on SNL. Maya Rudolph's comic talents are almost entirely wasted and then there's Amy Poehler, who here reveals new sides of herself—she's not just a writer and actress, but also a bad director, unimaginative and cowardly. Did any of these old SNL actors and actresses ever make a good movie? I cannot think of one.

Wine Country follows six women in their descent to rock bottom in such a way that the only funny thing is they don't see it coming. Their lives haven't worked out as they would’ve liked and it's too late to change. One is turning 50, so they're all going to Napa to make a boozy weekend of it. Of course, they all come to face the fact that they're failures at the end of the second act and then try to reconcile themselves with those failures in the third. Lost husbands and jobs, bad husbands and jobs that can’t replace love, and in a few other cases, just not being able to live well like adults for no compelling reason. The only sympathetic details are the medical conditions. But in a comedy, you'd expect at least an attempt to make disease funny.

All of them are humbled by medicine—they're too worried about what pills they're already taking to even think about taking drugs. Maybe they've never learned better, but they can’t misbehave anymore. These are old girls trying to go wild and it's a pitiful sight. You wonder whether anyone involved in this movie can see anything worthwhile about getting old. The movie turns from self-pity to self-loathing. I guess all these women will be replaced by young women in whatever Netflix does next.

And good riddance. These six friends, born circa 1970, suffer from all the delusions of the worst caricatures of Boomers—never wanting to grow old, refusing willfully to understand that they’re mortal, hoping that having fun means they're perpetual children, even if their lives are falling apart. It's hard to sympathize with them.

Worse, their mid-life crises are boring. That’s plausible: Most of us wouldn’t have shocking stories to tell and few would care to hear them—but it doesn't belong in a movie. That Netflix would throw money at a worthless project is not a surprise, since most of what they make is miserable, but that these women have nothing to do but waste their talents is testimony to the mental breakdown of liberal comedy.

Worst of all, Wine Country is a movie Nancy Meyers wouldn’t have stooped so low as to make. Meyers chronicled the mid-life crises of Boomer women like herself starting in 1980 with Private Benjamin up to 2009s It's Complicated, when Meryl Streep was still looking for love in some, if not all of the wrong places. Boomer Hollywood feminism is desiccated.

The ability to tell worthwhile stories about interesting people is a neglected aspect of politics. In America, each political change brings new stories with it and some aren't mere hackery or entertainment—they last through the generations and are touched by greatness. We'd have no Casablanca without WWII. Rick's character is an ideal for American men. Lately, however, the liberal reign in Hollywood has turned sterile, which suggests an entire form of politics that's been taken for granted by the Boomers is exhausted.

Wine Country does have two useful things to say that could have made for a movie. First, these women met and became friends because they worked at a pizza place. Facing the first challenges of adulthood together, for years, was the only thing that got them the kinds of friends that could last a lifetime. But a political commitment to liberalism forces the story in the direction of a lonely individualism.

Had half the movie been flashbacks, it would’ve been really good. Indeed, the parts of the movie that do work are shameless 1980s-early 90s nostalgia. It's not just because these women were young then, but America was hopeful getting back to work after a terrible decade for the economy. But something in that foundation was weak and eventually collapsed. It’d be interesting to know what.

Only one of the six women has a family, which suggests the movie isn't looking to be representative of America—in fact, faith and children are almost entirely missing. So what else makes life worth living for liberal feminists? The movie focuses on women who obeyed the feminist imperative to be independent and are now suffering for it. We could learn why these women ended up unhappy and what they might do to make the most of their situation. Unfortunately, the ideology of feminism cannot be abandoned, so the women can’t admit their beliefs have failed them.