Black Mirror's new season is hopelessly trapped in the recent past. 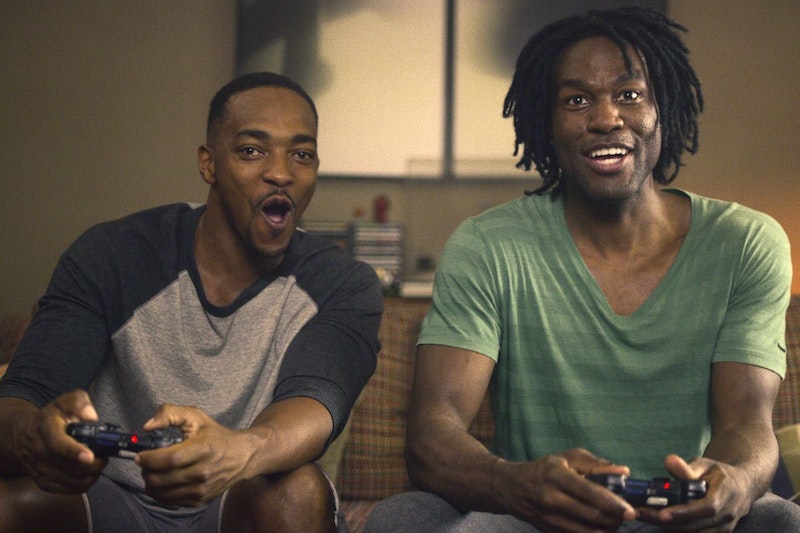 The most prestigious theme in entertainment is The End Of Liberalism. Jordan Peele's horror movies—like Us—and the new Twilight Zone fantasize about it. So do “end of the world” Marvel blockbusters, but they reassure us it will be all right, or at least not horror. But the most prestigious is Black Mirror, which just released a new season on Netflix. It's a flop.

Black Mirror made its reputation as the intelligent man's speculative fiction of the near, or imminent future—it was supposed to be daring and shameless. The show reiterates the claims of philosophers like Marx and Heidegger: Technology is our master, not our servant, and we hardly even understand the revolution it's unleashing. But making that claim, you need ideas—some poetic presentations of what's happening, unbeknownst to us. Creator Charlie Broker appears stumped, unfortunately, after success with the interactive feature-length Bandersnatch Christmas episode. The new season—three episodes, almost feature-length as well, are hopelessly trapped in the recent past, just like most ideas vying for popularity.

Start with Miley Cyrus, who stars in “Rachel, Jack, and Ashley Too.” This poor young woman, so abused by the entertainment industry—so given to self-abuse as a consequence, plays a girl forced into pop stardom and horrifyingly exploited through the use of technology. She wants to express herself through her music and celebrity, but the system enslaves her. So another Miley Cyrus emerges: all vulgarity all the time, the mirror image of the all-too-cute all-the-time former child celebrity. Does that sound familiar?

She sings pop versions of Trent Reznor songs, which passes for irony on Netflix. It's supposed to reveal the ugliness of the exploitation of the entertainment industry. This doesn't matter anymore. The FantasyLand of celebrity is dead and one way to see that is, we don't create new celebrities—mostly, when our attention falls on a celebrity, living or dead, it's to reveal that they're freaks and monsters. It's cancel culture in liberal America, and it makes Black Mirror obsolete.

Next, “Smithereens,” a story about a tech corporation combining Facebook, Instagram, Twitter, etc. The nice kid from That 70s Show plays the too-easily caricatured Twitter CEO Jack Dorsey, down to the hyper-privilege of exotic retreats for meditation, to escape the madness of the technology that make him rich enough to afford such retreats. A hostage-taking maniac tries to get in touch with him over he phone to complain about how social media ruined his life.

Social media is even more boring than celebrity when telling an intelligent, interesting story—it's more pointless, dramatic, and even more sentimental—and with less justification. Black Mirror is too blind to notice that social media is nothing but the democratization of the very celebrity culture and entertainment industry it was excoriating in the other episode. It's every man, woman, and child, all identities and genders, real and imaginary, trying to become celebrities.

This is how FantasyLand is crashing down, inducing despair in everyone invested in the idea that they'll make a difference by becoming popular. The power of screens to broadcast—to sell us fantasies we all share and which we think will transform our lives—has itself been canceled. Aside from the now-ended Game Of Thrones, there's nothing popular enough to be called broadcasting. All casting is narrow. The more desperately people try to make themselves into celebrities, the more it becomes impossible.

Striking Vipers is the one episode with a real story to tell—and the only one that follows the Black Mirror shock brand. It's about homosexual love among black men in America, once considered taboo. In fact, until recently a storyteller would likely been accused of racism for tackling the subject. But after Moonlight won the Oscar, things have changed. Wealthy liberals, the ideal Netflix audience—but also creators, corporate staff, and media sycophants—don't care about what black Americans might think about how they’re portrayed in entertainment. They only care about intersectionality. (The rare exception was Black Panther.)

Striking Vipers is the name of a martial arts computer game. The title is a pun—it's not so much about the deadly violence simulated by the game, but rather the phallic symbol. Male aggression is reduced to sex, the story suggests, because in the modern world there are no more wars to fight, no more dangers to face. Men like the two protagonists smoke weed go clubbing. One character becomes a 1950s suburban ideal American man, but in the 21st century. We see him grilling burgers on the back patio for his birthday, while the kids play. His only friends are parents of his kid's school friends. The show suggests he betrays his black identity—everything is gray, colorless in his house, clothes, and his wife's hair and clothes. Family life is draining him, so he escapes into computer fantasies where he discovers forbidden pleasures.

VR technology allows the two friends to reconnect after life separates them. They take control of their lives, in a way they can't in real life. But when they reconnect as game characters—a Chinese heterosexual couple—instead of fighting, they have sex. They wonder if it’s cheating. Does it make them gay? And from there the episode becomes a boring criticism of middle-class conformism and men's fear of their sexuality.

The one taboo for Netflix is male friendship. Why can’t these men love each other without the whole virtual sex psychodrama? Entertainment about male friendship is almost unthinkable now. It's anathema in our liberal culture, because it implies that men like being men, think it's good to be a man, and therefore like other men, too—manliness is not a madness or disease requiring Progressive therapy.

If Black Mirror abandoned liberal pieties it could come up with good new stories—by reflecting on the fantasies we indulge about escaping the limits of our nature.