Between the Alt-Right and the crazy Left. 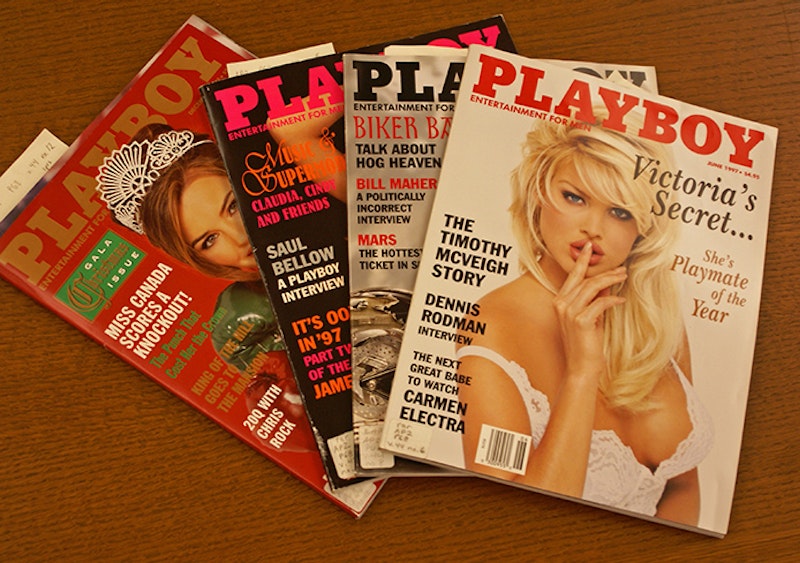 Playboy might be able to make a strong comeback, but it needs to move to the right. I don’t mean become Breitbart or National Review, but rather embrace the JFK conservatism that sits between the hard right and the hysterical left. In its dominant years from the 1950s to the rise of the digital age in the 1990s, this is the turf Playboy claimed. It defied not only the puritanical squares of born-again America, but also the feminist and cultural loons on the left. That space is once again wide open, if Playboy will forget about pleasing the cultural left.

Playboy also needn’t sink into the sweaty confines of the modern manosphere. Hefner once joked that he had “no desire to learn how to trap a bear,” a rebuke both to the he-man flexing of the man’s mags of the 1950s and, now, the truck-pulling posturing of the anti-cuck right. Hefner celebrated culture, but not just manhood. Today’s alt-right jihadis hunt through the Internet to find leftist outrages to react against, sometimes settling on some goofy social justice sophomore at a university who should’ve never even been noticed. At the same time, the left has become punitive and unhinged, even condemning the innocent and sexy 1940s pinups that motivated the young Hefner.

The classic Playboy had interesting coverage of books, art, movies and philosophy. Salon once noted the diamond lineup from Playboy’s December 1968 issue: “The table of contents includes the following: A quartet of short stories by Alberto Moravia; a symposium on creativity with contributions from Truman Capote, Lawrence Durrell, James T. Farrell, Allen Ginsberg, Le Roi Jones, Arthur Miller, Henry Miller, Norman Podhoretz, Georges Simenon, Isaac Bashevis Singer, William Styron and John Updike; humor pieces from Jean Shepherd and Robert Morley; an article on pacifism in America by Norman Thomas; a piece on how machines will change our lives by Arthur C. Clarke; an essay on ‘the overheated image’ by Marshall McLuhan; contributions from Eric Hoffer and Alan Watts; an article in defense of academic irresponsibility by Leslie Fiedler; a memoir of Hemingway by his son Patrick; Eldridge Cleaver interviewed by Nat Hentoff; a travel piece by the espionage novelist Len Deighton; and the first English translation of a poem by Goethe.”

In contrast, the May-June 2017 Playboy offers a profile of sex-obsessed activist Dan Savage, and a lengthy interview with Vox editor Ezra Klein. Love him or hate him, the world has seen enough of Savage. Klein simply regurgitates leftist boilerplate. There’s some good fiction by Dennis Lehane in the issue, and an interesting article on using LSD as therapy. But it’s far from the festive intellectual garden of issues past. Then again, June Playmate of the Month Elsie Hewitt is a natural and curvaceous beauty; she’s shot without much makeup, a nice artistic alternative to the gynecological exams of Internet porn. Women’s bodies are works of art, and this signals an appreciation of this as well as a return to the girl-next-door approachability that Playboy lost when they opted for the shiny peroxide mannequins in the 1990s.

If I was on the editorial team at Playboy, I’d pitch the following going forward: a review of the new biography of Czeslaw Milosz; a profile of pianist Víkingur Ólafsson; an interview with James Woods, the actor turned conservative Twitter firebrand; an article on the man crisis, akin to what recently ran in the wonderful 1843 magazine; an editorial against censorship on campus; a piece on what makes the Alamo Drafthouse great; fiction by Roddy Doyle; a poem by George Greene; a piece on the 100th anniversary of the Russian Revolution by Richard Pipes; 20 questions with new Wonder Woman Gal Gadot; and an excerpt from the comic Triggerman. Get back to the eclectic mix of culture and common-sense liberalism, which today is known as conservatism, that made the magazine great.