Adam West Was the Sexiest Batman 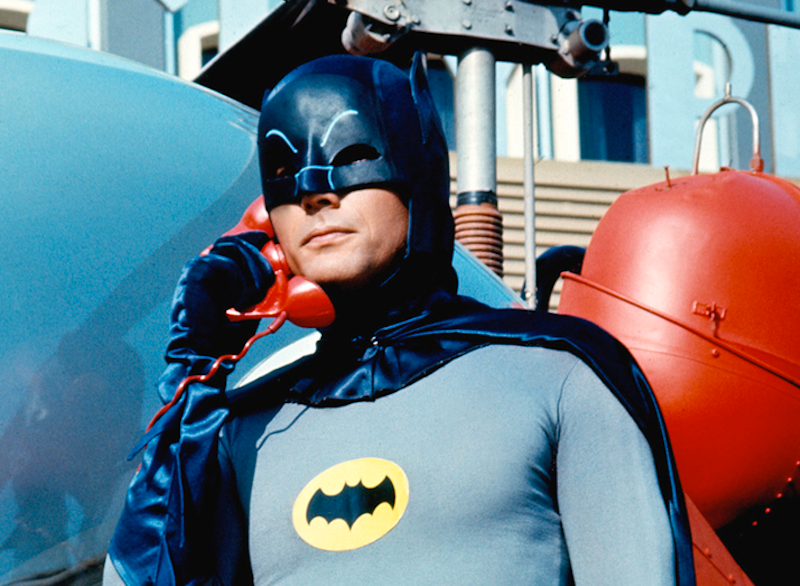 Calling Adam West's Batman sexy may seem like an odd assertion. West was pleasantly handsome in a 1960s Roger Moore vein. But he was hardly a physical paragon on the order of contemporary superhero heartthrobs like Chris Evans or Chris Hemsworth. His Bat suit didn't outline a gym-hardened body; instead it made him look dumpy. The skin-tight fabric clung tight to his cute little Bat paunch, spilling unashamedly over his cute little Bat belt. And the campy 1960s Batman didn't perform heroic martial arts sequences. Though he did sometimes do the odd, mysteriously sensuous Bat dance.

Yet, silly though he may have been, West provoked storied enthusiasm in female Batfans. He also generated substantial onscreen chemistry with a string of his co-stars, most famously with breathtakingly cat-suited Julie Newmar as the Catwoman. Catwoman's life of crime was one long gambit for Batman's attention, no more so than in the famous clip in which she asks Batman if wanting a kiss makes her a "bad girl." The gallant Batman assures her that it does not. "Kissing is one of the most natural things in the world," West assures her. His voice roughens seductively as he explains, "Some people kiss almost every day, I'm told." Then Robin interrupts them before they can touch lips. The show’s writers knew that Bat buildup is sexier than Bat consummation.

Adam West does a good bedroom voice, it's true, but still, you have to ask—what is the Bat secret? Why does West smolder, while other Bat-dudes, from Bale to Affleck to Keaton, just look uncomfortably stolid in their foam-rubber pecs? Part of the charm is the wholesomeness. Other Batmen are dark, gritty, tough and mean. West's Batman is just really, really nice. He drinks milk, because alcohol is bad for you; he obeys no parking signs even though he's a deputy of the law. He's so committed to his no-killing code he won't even sacrifice the lives of cute little ducks to a higher cause.

Batman is the squarest of the square, and in theory should be a boring turn-off. But West's Batman is also a vision of quintessential manliness. He's the perfect Daddy, who’ll solve every problem, right every wrong, and muse philosophically that "Life is a cupful of surprises to the last drop" even while facing certain death in a giant hold puncher powered by a player piano. Batman is safe; he always does the right thing with good cheer and a comforting pat on the back. You can see why Catwoman (and many others) glance covetously through their masks at the prospect of being treated with consistent respectful kindness. Whatever your gender, who wouldn't want a partner who’ll fix everything without being even a little smug about it? Who doesn't want a hero who is nice to ducks?

You might find perfection a bit boring over the long haul. But the genius of West's Batman is that he knows how ridiculous his niceness is. In the 1960s Batman, the hero is both the paragon of paragons and the hip kid who knows that paragons are ridiculous. Nefertiti, an ally of the evil King Tut describes Batman as, "Handsome, clean cut, and groovy," and what else can you say about a guy who wears Hawaiian shorts over his Bat-pants to engage in a surf battle? The grooviness is in being clean-cut, but it's also in the subtle, kinky clues that maybe he's not so clean-cut after all. Batman is always getting delectably tied up, or bringing some bat-gassed lovely to see his super-secret Bat cave. Everything is aboveboard, scrubbed and proper in Wayne Manor, but what excitement lurks trembling in that Bat-closet?

The 1960s Batman is generally referred to as campy. Camp in this context is thought of as ironic distance. The show is camp because it makes fun of its own superhero tropes; campiness means that you don't mean it. Camp in Batman is definitely a matter of not meaning it, in part. But camp originally referred to art that referenced the closet and homosexuality. Camp, in other words, is about sex, sexiness, and sexual content; it's a mode of innuendo, whispers, and winks.

Batman had plenty of gay goofs—perhaps most successfully in the episode where Liberace plays a villainous pianist while Bruce and Dick fake their deaths by incinerating themselves in a flaming closet. But the show also uses camp to play with other kinds of sexual content. Batman the boring square is secretly Batman the hip sexy guy. Or, alternately, Batman the hip is actually secretly the boring sexy square. The closet opens either way. Batman can be appealingly innocent or appealingly knowing, both nice and not-so-nice, both safe and excitingly aware that the safety is a joke.

Contemporary superhero films and television shows have mostly abandoned camp for a more stable balance between serious adventure and witty patter. Adam West's singularly suave doofiness is still seen as a desecration of the character in some quarters. Superhero sexuality in the age of Batfleck has moved in a less covertly overt, or overtly covert, direction. The present superhero zeitgeist is not conducive to Batdances that make Catwoman giggle and surreptitiously lick her paws. Somewhere in his secret Bat Cave, looking down, Adam West can rest well knowing that there will probably never be a Batman alluring enough to wear his adorably silly cowl. No Batman will ever know as little, or as much, about sex as Adam West did, Bat-paunch and all.