Lizzy Goodman’s Meet Me in the Bathroom is a thorough and addictive document of New York in the aughts. 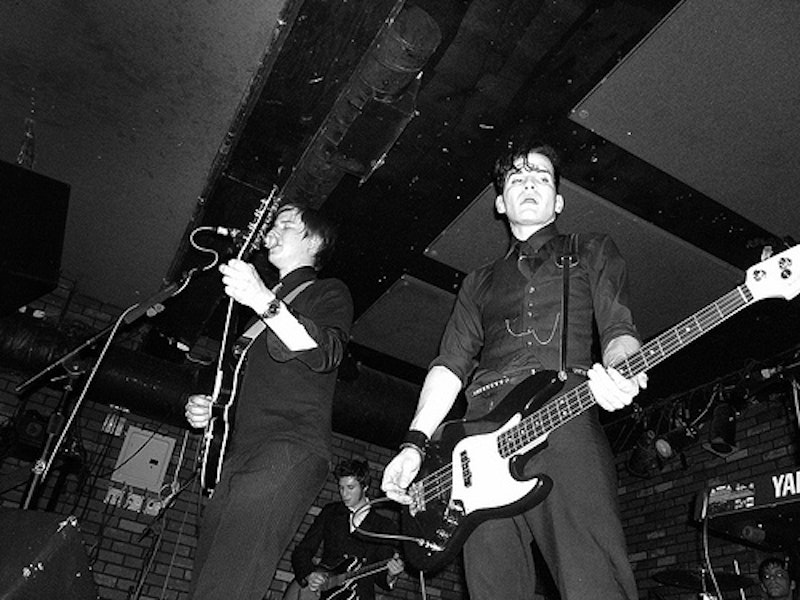 Reading about other people doing cocaine is so much more fun than doing cocaine yourself. I received Lizzy Goodman’s new oral history Meet Me in the Bathroom last week, a 622-page book about music in New York City in the aughts. The Strokes are the marquee band and get the most attention, Interpol a close second, along with the Yeah Yeah Yeahs, LCD Soundsystem, TV on the Radio, Grizzly Bear, Vampire Weekend, among many others familiar and forgotten: Le Tigre, Fischerspooner, Jonathan Fire*Eater, The Hives, The Vines, Ryan Adams. I thought I’d just paw at it in pieces over time, but like some bad coke flashback, I found myself on the couch sweaty and bleary-eyed after sitting down intending to read for 10 minutes and going a couple of hours in that horrible coke goblin rigor, cramped and drained. I’ve blown so much time on rock biographies, people I dig along with bands I never listen to: every single Guns ’n’ Roses book (Duff’s is the best), Boy George, Bob Mould… if you’ve got Tupperwares full of cocaine and exploding livers, I’ll have it here, in my mind.

Meet Me in the Bathroom is expansive and thoroughly researched, featuring hundreds of interviews with band members, publicists, artists, critics, editors, promoters, drug dealers, scenesters. Goodman picks up New York history in a bland and boring time: by the late 1990s, after Giuliani had sanitized and sandblasted the city, there was no music scene left, and the people that remained wanted so badly to have amazing bands come out of Manhattan again. The book’s arc begins with Jonathan Fire*Eater, the archetypal almost got signed band that was completely forgotten four years later, and ends with Vampire Weekend signing to XL just 18 months after they formed. By the time their self-titled debut came out in January 2008, there was no stigma about signing to a major label or even licensing your songs to commercials (Animal Collective and Dan Deacon were both featured in separate Crayola ads that same year).

Everyone keeps coming back to The Strokes in Goodman’s book: the band that got in right at the end of a music industry making $15 billion a year, the last band that trashed hotel rooms and punched publicists in the face and got away with it, the band that should’ve been so much bigger but self-sabotaged and laid back because of typical Gen X hang-ups: the right influences, the right haircut, that infuriating forced ambivalence, the beautiful people feigning not giving a shit about what other people think. But they were the New York band that lifted the water for everyone else, and after 9/11, everyone describes coming out of the confusion and horror of it all determined to do more drugs and make more stuff.

The book’s scope is so vast, I didn’t know what I was getting into—I bought it for the Interpol bits. Paul Banks is the best lyricist of the 21st century, and his singing on Interpol’s second album Antics is still breathtaking. That’s the sound of God that John Lennon was talking about when he was trying to get George Martin to fix something up for his vocal on “Tomorrow Never Knows”: monks chanting from the top of a mountain. That’s the power of Banks’ voice and his mellifluous lyrics, a sublime mix of odd word choices and bizarre phrasing bordering on English as a second language, non-sequiturs, bleeding heart pleas, and plain statements of yearning: “I can’t pretend I need to defend some part of me from you/I know I’ve spent some time lying.”

Marc Spitz is an excellent reoccurring voice, and it’s a bittersweet pleasure reading him just a few months after his sudden and unexpected death. Catty, whip-smart, insightful and exciting in a way that few of his peers were: “I saw kids in Connecticut and Maine and Philadelphia and DC looking like they had just been drinking on Avenue A all night. Sixteen-year-old kids in white belts and Converse Chuck Taylors with the greasy hair—hair that had been clean a week ago. Those kids had probably never even smelled the inside of a thrift store before Is This It came out.”

It’s a sad book because it’s about the end of the rainbow in music and in publishing. Pretty much everyone interviewed for this book would be richer if the Internet never decimated media. I’ve seen some people say that it’s too soon to revisit this era, but looking at The Strokes, and even Interpol’s success through the middle and late aughts, we feel a world away. And Vampire Weekend is such a nice note to end on, because Goodman gets to tie in the key difference between Millennials and Gen X musicians: now, there are no hang-ups, and everyone’s a polyglot. It might’ve been daring for Jack White to sing “Jolene” in 2001, but everyone loves a little bit of everything now. We’re carried all the way over to Brooklyn when everything coalesced and culminated again in New York in 2009, with the simultaneous success of Grizzly Bear, Dirty Projectors, and Animal Collective (who are conspicuously absent from the book, not even mentioned). It’s Please Kill Me, it’s Live from New York, it’s a deliriously addictive book that’ll hook anyone who digs these bands but especially those that lived in New York at the time and remember how everyone came together for just a bit.