Love is All Around Arak

Arak's quest was one rooted in the universal power of belonging and companionship. 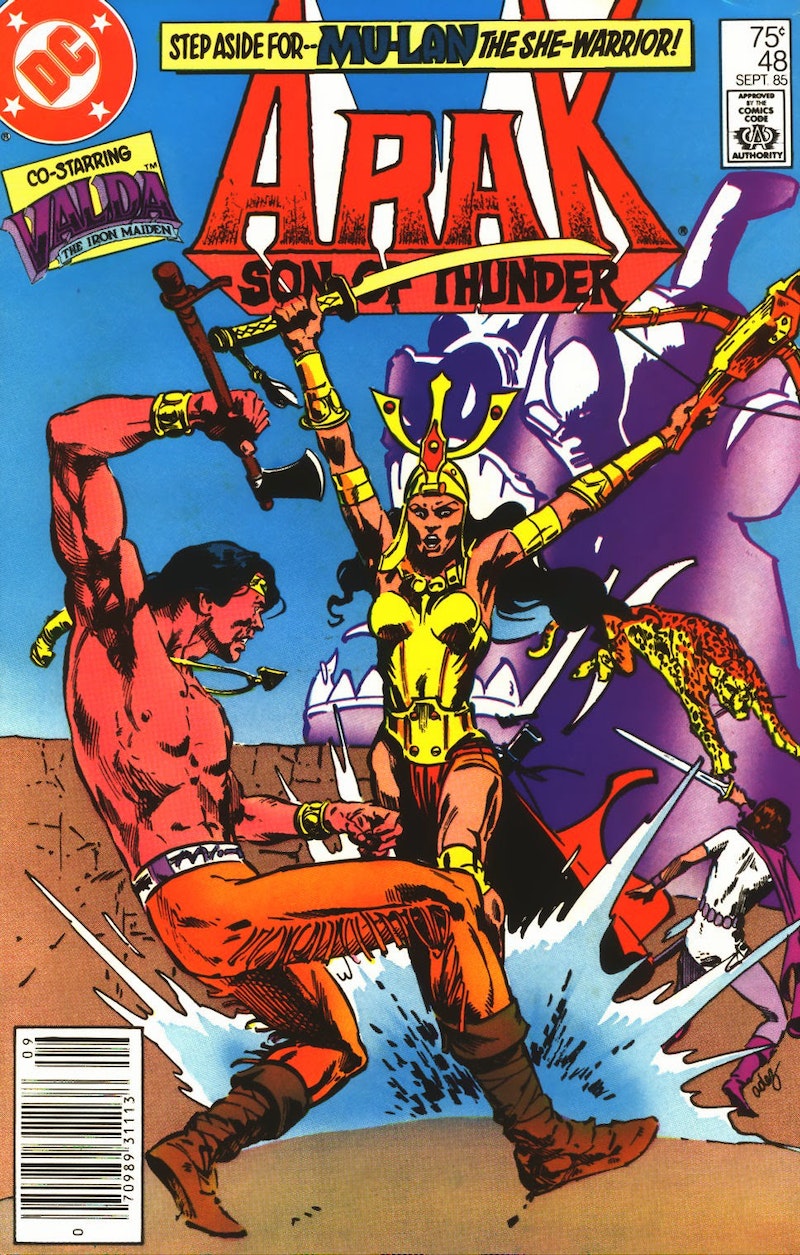 Post-traumatic destiny and a refugee’s desperation drive Arak and his ragtag band of friends and supporters through a world rife with mysterious fate. Does the trail end in heaven or hell, death or a new life, priceless memories or insane delusions? As each leg of the journey brings them closer to the utopian Quontauka homeland, through it all the diverse crew formed a “united nations” of mythic archetypes:

Valda The Iron Maiden: This young Christian warrior combines Joan Of Arc’s tenacity with the chivalry of Bradamante, a champion from epics of the Charlemagne era (in Arak Bradamante is Valda’s deceased mother). The evil sorcerer Baledor uses magic to spark a fight between Valda and Arak (a similar story from the old Bradamante tales involves the eponymous knight and her paramour the warrior Ruggiero). Soon after being freed from Baledor’s spell, an intimate connection was forged in love and adventure. The relationship of Valda and Arak only grows stronger as the series continues.

Satyricus’ dilemma as the last of his kind closely resembles an element of Steve Ditko’s “The Last One” (a 1957 story from the 12th issue of Charlton Publications’ This Magazine Is Haunted). Like that philosophical tale’s tragic centaur, Satyricus’ dangerous intensity came from a fear of death and the immense stress of having to carry on his nearly-extinct race’s heritage. Once he joins Arak’s crew gradually his personality becomes less acidic. Fear and loneliness are overpowered by the friendship he develops with the wandering adventurers.

Re-is Hazz: Also known as “Captain Lucky,” this Iraqi sailor debuted in Arak 41, making him one of the last major characters to be introduced. Hazz’s larger-than-life personality and his lofty achievements evoke the maritime culture of the ancient world’s Arab sea traders. More importantly, he contributes an objective voice in several of the final issues. The Thomases and Lofficiers used Hazz to energize the series’ theatrical narration. Even though he comes off like a confident navigator who’s seen and done everything, his descriptions of Arak’s travels and tribulations shine with a profound sense of awe.

Mu-Lan: Thomas/Lofficier’s re-interpretation of this Chinese folk heroine doesn’t stray too far from the character’s original fourth century A.D. depiction. Just like her first appearance in Ballad Of Mulan, she’s a gender bending warrior who eschews any stereotypical feminine iconography. Unlike the original, she’s raised by her nameless grandfather, a sorcerer determined to destroy an evil false dragon god. Mu-Lan pulls a dangerous stunt to draw Arak and his friends deep into the elder’s conflict just before they make it to The Great Sea.

Other notable supporting characters: Valda’s adoptive father Malagigi (a sorcerer modeled after Maugris, another figure from the Bradamante epics), Alsind (this spirited teenage sidekick would grow up to become Sinbad The Sailor. According to Thomas and co., the Arab world’s most famous fictional voyager began his career hitching a ride with Arak’s entourage after they save him from a giant lizard attack), and Brunello (a puckish thief with magic powers; he first appeared in the 1400s in Matteo Maria Boiardo’s epic romance Orlando Innamorato).

Arak and his compatriots each have personal reasons for embarking on the quest as a group. For Hazz it’s a reconnaissance mission, just another chance to expand his territory as a merchant mariner, his global source of income and patronage. For Valda her dedication is an act of love; sacrificing her time and safety strengthens the emotional bond she enjoys with Arak as her lover. Malagigi’s presence also represents an expression of love. In his case it’s familial love. His parental dedication to Valda keeps him on Arak’s trail. For Alsind the adventure is a form of education. Experiences leave an impact of knowledge that no teacher, book, or school could ever bestow. For all involved there’s a symbiosis at work. Arak never tried hard to build this crew of supporters. He had no interest in wealth, narcissism, or fame. This was a quest rooted in the universal power of belonging and companionship.