Combining mythology, Christian lore, and folk tales, Arak Son of Thunder revealed how indigenous traditions, religions, moral precepts, and philosophies from all over the world could complement each other. 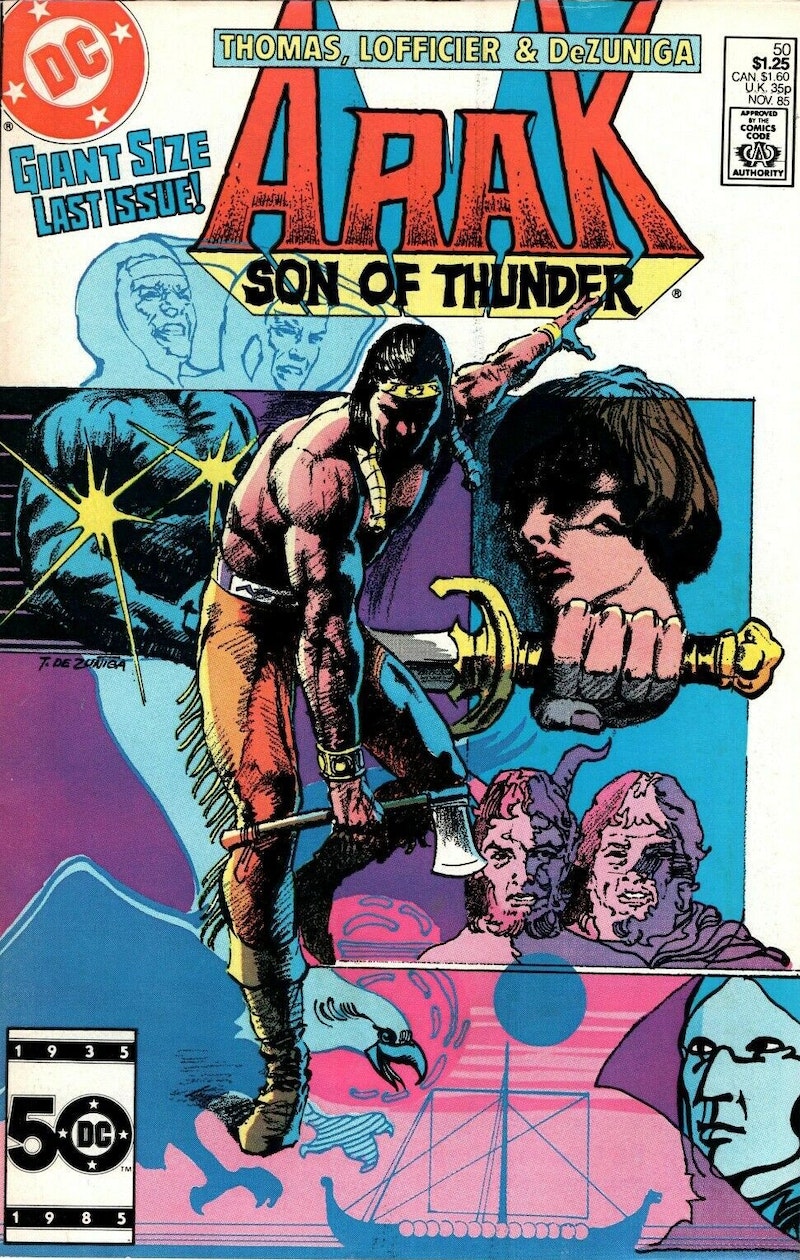 Brian Eno, Jon Hassell, Aiyb Dieng, and a handful of other experimental music pioneers created the Fourth World, a two-volume series of recordings that transformed cultural differences into a new style of music. Ophthalmologist L.L. Zamenhof invented the Esperanto language to bring the greatest level of shared communication to all people who could read and speak. Catherine de Rambouillet, Madeleine de Scudery, and Francois Chauveau created the Carte de Tendre to help society embrace its strongest collective sense of empathy and love. A trio of married couples—Roy & Dann Thomas, Randy & Jean-Marc Lofficier, and Tony & Mary DeZuniga—united to create stories for the DC Comics series Arak Son Of Thunder. Combining mythology, Christian lore, and folk tales, their work on Arak revealed how indigenous traditions, religions, moral precepts, and philosophies from all over the world could complement each other.

Arak debuted in August 1981 as a back-up feature in another DC fantasy title, Warlord. It graduated to its own book a month later the same year and was written mainly by Roy Thomas (Avengers, X-Men, Conan The Barbarian). Art was handled by several different creative teams throughout its five-year run. Arak Annual 1 brought the title’s greatest collaboration together in late 1984; The Thomases, Lofficiers, and DeZunigas also collaborated on Arak’s last six issues (45 to 50). Despite its wide perspective, Arak has only been translated from English to French, German, and Finnish so it’s hard to gauge how well the book’s stories have fared conceptually around the globe. As it is, the title’s distinct universality makes it incomparable within the pantheon of American comics.

The series’ conscious effort to be timeless and multicultural was a quiet demonstration against the Reagan-era. In a time when vanity, corporate branding, cultural pigeonholing, and rampant nationalism were infecting the wealthiest parts of the world, the title’s narrative was antithetical to consumerism and cultural/political tunnel vision. This makes Arak a strange contradiction as it was published by DC, one of the most financially successful and ubiquitous comic companies. It was a mass-produced commercial product that catered to readers who were sick of the industrialized world’s divisive baggage.

Arak’s Eighth-century adventures centered around everything from sword and sorcery tropes to mythological tributes to moralizing fables. Its imagery married classical realism, abstract design, and a palette of primary colors that often appeared in dynamic contrast to transformative shades of sunrise and sunset. The stories took place on sea, land, in mountains, forests, deserts, rocky crags, the courts of royalty, humble woodland villages, dreams, limbo, mid-air, unearthly dimensions, and the astral plane of the gods.

The character Arak was a warrior-shaman of The Quontauka, a fictional Native tribe that lived in what’s now known as the coastal northeastern US. Arak’s origin story and other elements of the series are loosely based on Seneca and Iroquois myths. He-No The Thunder God was one of the most powerful Quontauka deities. The thunder god and a beautiful Quontauka woman named Star-of-Dawn fell in love and soon conceived a son named Bright-Sky-After-Storm. For a time the family lived together in the realm of the gods, but Star-of-Dawn longed for the simple pleasures of humanity and returned to the Quontauka village of her birth. Mother and child enjoyed a tranquil life there until a war-like serpent cult massacred most of its population.

In the midst of the attack He-No magically transports young Bright-Sky-After-Storm away from the gory scene and into a canoe adrift on an ocean where he’s found, sheltered, and raised by a band of Vikings who re-name him Eric. The child’s Quontaukan accent transforms that name into “Arak.” As an adult, Arak set out to find his birth home “across The Great Sea.” His epic journey was never anchored to one country, culture, or frame of conventional reality. Along the way he gained a tight-knit crew of new friends all while the strength of his character was constantly being tested.