Half My Life warmed my heart. 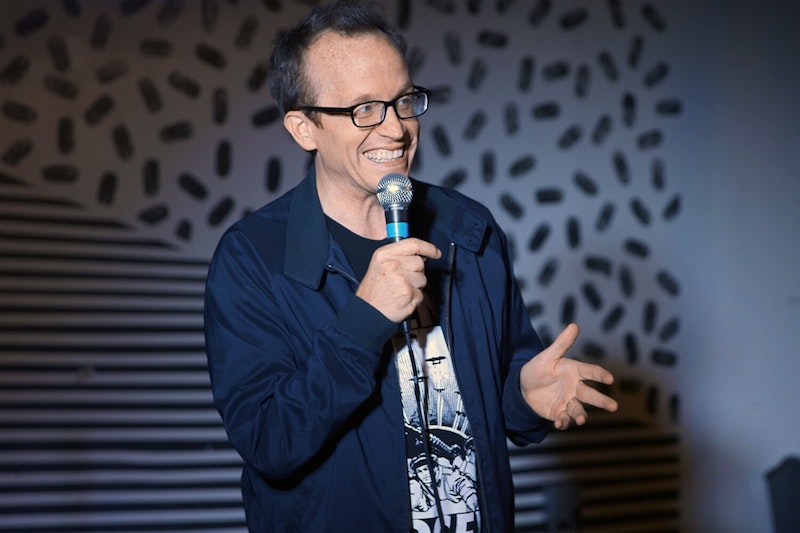 I'm a fairly recent fan of Chris Gethard: I heard the name, and maybe watched a couple bits of stand-up on YouTube. But I never fully understood the many dimensions in which Gethard's art exists. I knew he was a stand-up, but never realized he was also an author who hosted a three-season show with over 155 episodes, a comedian with a massive and dedicated following. I didn't understand the brutal honesty he exhibited, constantly merging his own life struggles with his art.

After listening to Gethard's interview in a recent episode of Tom Scharpling's podcast The Best Show, I was hooked. My initial impressions of Gethard were that he was self-deprecating, but not like a wet-towel wimp. He was kind, but honest. He was gentle, but certain in his individuality. His vulnerability was charming. His openness with his experience with mental illness made him relatable.

Gethard's new special Half My Life warmed my heart. Shot in multiple locations on a recent tour with his friend, collaborator, and supporting act Carmen Christopher, the 40-year-old comedian discusses the recent birth of his son, Cal. He speaks of struggles and joys of having a son. The subject has been explored often through comedy, but Gethard's approach and perspective is unique. His insight and wit shine through the dark corridors of the bars and clubs he plays, the same bars and clubs that his punk rock idols have played.

The footage from Baltimore’s Ottobar was the first time I’ve ever experienced FOMO. Watching Gethard wrestle a stranger who’d only heard Gethard's name that night was bizarre and hilarious. Many celebrities or even comedians may find that insulting, but Gethard understands that what he does takes time to build, that not everybody’s on board with what he does. But he invites these strangers into his world. His approach to comedy is genuine and healing. As he says in his interview with Scharpling, he's one of the only comedians whose career is based around who he is as a person. Without a gimmick or an act, Gethard displays his vulnerabilities on stage without fear.

In contrast to previous specials, such as HBO's Career Suicide, Gethard's new special is light-hearted and jovial. This isn’t to say Gethard has lost any of his edge; quite the opposite. Watching his specials back-to-back allowed me to notice how his growth has impacted and enhanced his comedy.

I struggle with a spectrum of mental illnesses. Hearing Gethard speak so candidly about similar disillusion and depressive episodes is inspiring. He doesn't hold back, doesn't compensate. Instead, he tries to stretch the taboos that our society has implanted in us, the harmful idea that having a mental illness, taking medication, or seeking therapy is a weakness. I try to do something similar in my music, painting a precise picture of how Bipolar Disorder and manic depression have affected my well-being and shaped how I envision the surrounding world. And this is partly why I appreciate Gethard; the artist and art are one in the same. And more importantly, I get where he's coming from. I'm practically right there with him, following his story, taking notes. The fact that his niche career is thriving and that he's married with a newborn son gives me hope for myself.

Half My Life isn't an ordinary stand-up special. I don't think any stand-up special has been shot at nine a.m. during a pancake breakfast. Nor has any stand-up special been performed to a crowd of alligators. But I believe what really separates Gethard from other comedians is his relationship with his fans, providing them a platform to become more than just an audience member, but an essential part of the show. There’s no narcissism or selfishness in Gethard's work. He’s no different from each individual audience member he performs to. Gethard is a perfect example of a success story, proof that things can and will get better, if only you continue pushing through the muck.