Whether or not Arak Son of Thunder succeeds as a multicultural epic, it's hard to find a more universal concept than infinity. 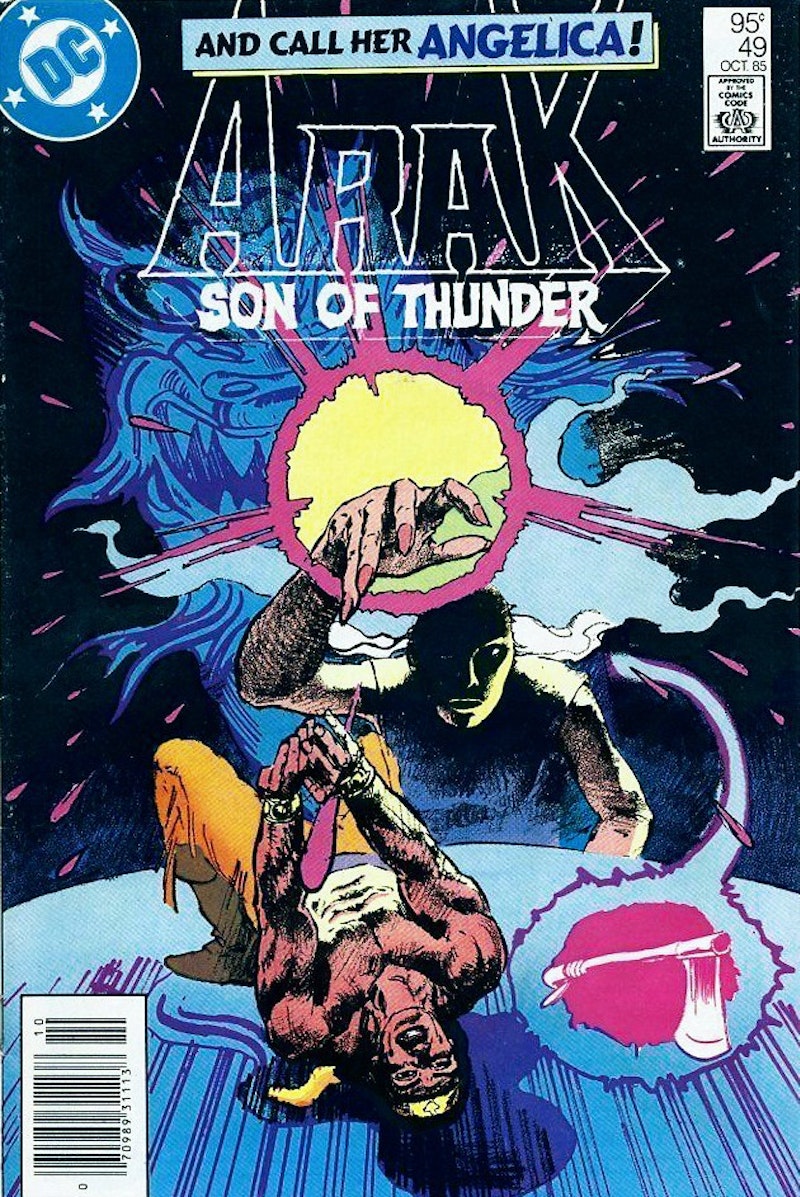 Subversive politics and a patchwork of folklore and mythology gave Arak its aesthetic fingerprint, but the series’ plot lines, prosaic scripts, and interpersonal dynamics are what made it great. The Thomases handled plots while The Lofficiers took care of dialogue. Comic writers began regularly using this collaborative formula around the 1970s. It gave professional comic letterers and longtime fans a new kind of narrative to chew on while also drastically altering the look and atmosphere of stories. In the 1980s, the presence of complex, experimental writing became ubiquitous and Arak endures as a standout example of how the era’s story-driven comics did more than just flesh out fictional personalities.

Arak’s last three issues represent the series’ peak. As the crew made its way to the edge of The Great Sea the title’s creative team built an oblique yet decisive finale. From issue 48 onward The Thomases’ plots became progressively more dramatic and action-packed. By the final issue, the narrative tone and the DeZunigas’ art attained a synchronicity that previous issues only hinted at. The Lofficiers’ dialogue read like arcane philosophy texts. In 48’s “Dragon Slayers For Hire,”, Mu-Lan's nameless wizard grandfather expounds upon dualities of universal truth:

“A person of superior virtue never acts. Yet there is nothing he leaves undone.”

“Arms are ill-omened instruments, child. A weapon is always an enemy, even to its owner.”

“I look upon the ancient fires that light your true being… not the fleshy envelope that you wear.”

In Arak 49 the archvillain Angelica returns for a final battle. This power-mad sorceress unleashes an enchanted sea serpent upon the crew in the mind blowing “And Call Her Angelica!” The DeZunigas’ shine with startling, deceptively simple illustrations that show Arak battling the monster with a combination of magical and physical combat moves. Colorist Adrienne Roy floods the pages with rich greens, teals, and cerulean blues giving the underwater grudge match a gauzy disorienting atmosphere that reinforces the series’ most hallucinogenic qualities. “And Call Her Angelica!” is an attack on vanity and greed, two things that end up becoming the most destructive forces deployed.

Issue 50 thrusts the heroes into a double-sized roller coaster ride through a tricky mercurial plot. Titled “The Road To The Rising Sun,” Arak’s emotional farewell encompasses monarchal dramas and a supernatural protection racket. The problems surround the nomadic Ezo tribe, a primitive people whose lives are turned upside down by Japan’s feudal lords, and an oni with air elemental powers who keeps them trapped in the Japanese kingdom for its own esoteric reasons. In classic serendipitous style, Arak and his friends provide an essential outsider perspective that tranquilizes conflict.

The saga unfolds in three distinct parts which barely relate to each other. The series’ conclusion brings a feeling of pleasant exhaustion, the comic book equivalent of a head rush. “The Road to the Rising Sun” is held together by a string of subtle references to the restless globe trekking chronicled throughout the series. The Thomases, Lofficiers, and DeZunigas used these references to steer their creations toward a climactic pathway filled only with infinite possibilities. So did Arak Son of Thunder succeed as the ultimate multicultural epic? That’s debatable, but this much is true: it’s hard to find a concept that could be more universal than infinity.