While The Big Lebowski’s “The Dude” is dejected, Lodge 49's Dud refuses to be. 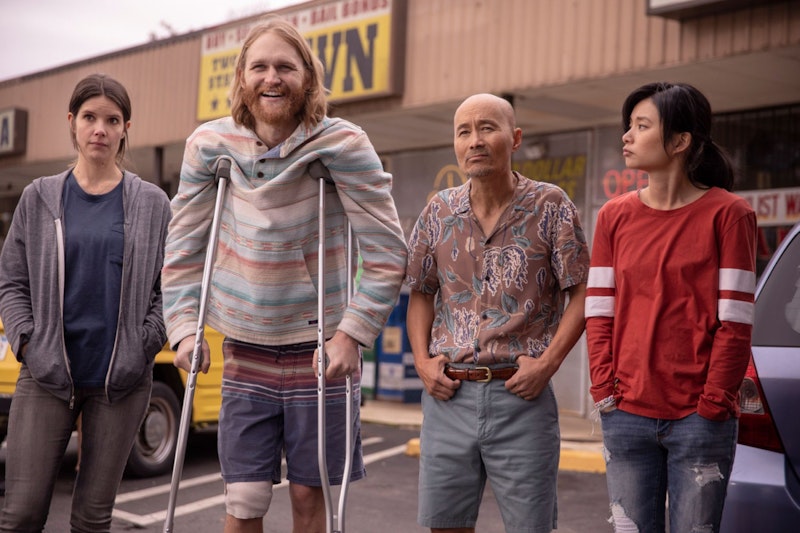 I checked out Lodge 49, and was surprised I hadn’t heard of it before. It seemed right up my alley. After finishing the two seasons, I understand why the acclaimed show produced by Paul Giamatti flew under the radar: it’s hard to describe.

Lodge 49 is a comedy-drama and is mostly linear in its storytelling. Sean “Dud” Dudley (Wyatt Russell) and his sister Liz (Sonya Cassidy) are grieving the loss of their father in Long Beach, California. Dud drinks the day away and finds trinkets on the beach to sell, while Liz waits tables and tries to pay off the debt their father left behind. To make matters worse, Dud was bit by a snake on a surfing trip, which keeps him out of the water, away from his passion of surfing and job as a pool repair man. One day Dud finds a ring on the beach and is informed it belongs to the local lodge of The Order of The Lynx. Dud quickly befriends Ernie (Brent Jennings) at the lodge and becomes a member.

There’s no real plot to Lodge 49. Throughout the two seasons, Dud tries to get his old life back to varying degrees of success. Liz works various jobs and process her grief more openly. Dud’s a bit too oblivious, and Liz too uptight. Ernie tries to help Dud navigate life while getting his own together. Beyond that, a pawnshop, a secret room, a shark, a land deal scheme, and a lot of swimming pools are all involved, culminating into a strange yet exciting conclusion.

You’re not going to see a satisfying story where people get what they want, because nobody in Lodge 49 knows what they want. As Dud and Ernie drive around sun-soaked Long Beach in search of the mysterious “Captain” or just drink beer and play golf, and Liz is forced to play human chess as team building at a corporate retreat, the show is at its best. There’s humor, but it’s far from a sitcom. It also avoids getting too heavy, besides a few emotional scenes.

Even when things get strange, Dud’s confidence reassures the viewer. When Dud’s temp agency lands him a security job, he stumbles upon a secret room that appears to lead to a different galaxy for a moment. Dud runs off in shock but returns the next night only to find the door gone. He shrugs it off and finds a new temp job. This job happens to be for the aforementioned “Captain,” a business connection Ernie has been chasing for years. Dud takes this small victory in stride just as he did the disappearance of the room.

The show’s anchored on Russell’s strong performance as Dud, and series’ creator Jim Gavin’s writing. While Dud’s a California burnout, he doesn’t fit the cliché character we usually see. He doesn’t smoke weed like most of these characters usually do. More importantly, Dud’s an unflinching optimist. Even though the world has put him through hell, he’s confident. While The Big Lebowski’s “The Dude” is dejected, Dud refuses to be. Russell himself noted the difference between the two, saying “There’s a purity to Dud that The Dude doesn’t have. He’s the Dude before he gave up."