Lecturing Dustin Hoffman was nothing but smug virtue signaling. 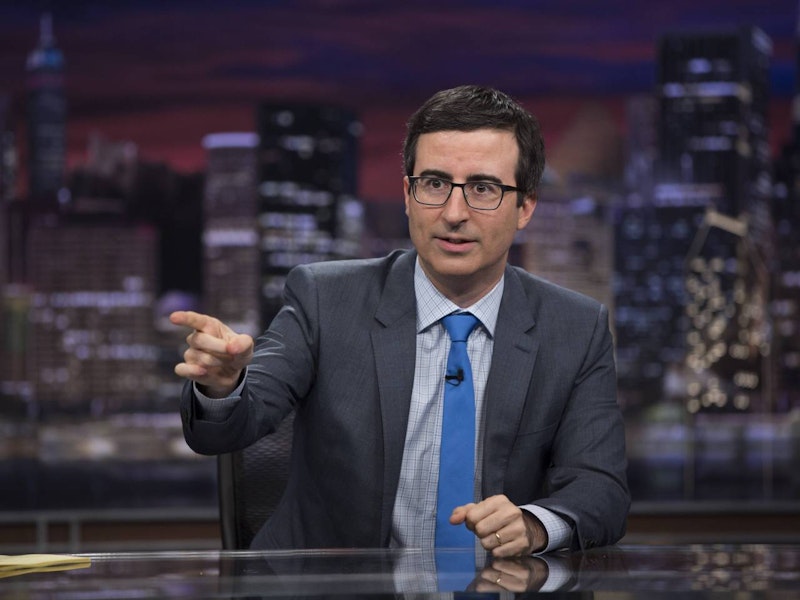 HBO host and lecture-porn virtuoso John Oliver was in the news recently when he tried and convicted Dustin Hoffman for sexual misconduct.

Oliver’s virtue-signaling is a sign that the newfound awareness about sexual harassment is elevating into a fever of witch burning. When examined coolly, Hoffman’s defense, while not entirely defensible, does make some sense.

“This is something we’re going to have to talk about because… it’s hanging in the air,” Oliver said to Hoffman at a recent anniversary screening of the film Wag the Dog. Oliver was alluding to an allegation made by Anna Graham Hunter in November that Hoffman groped her and made inappropriate comments when she was a 17-year-old intern on the set of the 1985 TV movie Death of a Salesman.

“It’s hanging in the air?” Hoffman said. “From a few things you’ve read, you’ve made an incredible assumption about me,” Hoffman noted, adding sarcastically, “You’ve made the case better than anyone else can. I’m guilty.” He went on: “I still don’t know who this woman is. I never met her; if I met her, it was in concert with other people.”

The liberal audience cooed its approval.

Oliver, who often displays Swiss-knife precision breaking down the details of culture and politics in his HBO sermons, can’t comprehend that the world may have been different in 1985. It was, and that should be taken into account, even while calling for a morally more upright world today. When Hoffman, attempting to defend himself, said to Oliver, “You weren’t there,” Oliver retorted, “I’m glad.” This is the expected response from the kind of social justice prince who expects a slave owner in 1854 Mississippi to be as enlightened as the current president of the ACLU.

In the generations before the snowflake Millennials, kids grew up a lot faster. They went into the fields or into war, or had to work as teenagers to support the family. The dark side of this was abuse, sexual and otherwise. But there were also opportunities for young people to live the dream of arriving in the adult world of their heroes. Veteran disc jokey Don Geronimo got his first radio job at 13, thanks to an older man who never abused him.

After her mother died, Ella Fitzgerald, 15, worked as a lookout at a bordello and with a Mafia-affiliated numbers runner. She won a singing contest in Harlem when she was 17. Rock and roll groupie Lori Maddox lost her virginity to David Bowie when she was 15. "I was an innocent girl," she recalled, “but the way it happened was so beautiful. I remember him looking like God and having me over a table. Who wouldn’t want to lose their virginity to David Bowie?” She later added, "I feel like I was very present. I saw the greatest music ever. I got to hang out with some of the most amazing, most beautiful, most charismatic men in the world. I went to concerts in limos with police escorts. Am I going to regret this? No.”

Those of us with good memories who are less judgmental than Grand Inquisitor John Oliver can even remember the more porous world between adults and kids. To view a movie like 1976’s The Bad News Bears is to witness a country where 12-year-olds smoke, drink, gamble, have adult conversations, and use language that is now banned on right-thinking college campuses. I was 12 when The Bad News Bears came out, and remember how it stunned friends and me—not for its scandalous scenes and language, but because it was so accurate. It was us.

I also come from an artistic family of poets, photographers, filmmakers, and actors. In the world of the arts, that is to say the world Dustin Hoffmann, age 80, has lived in since he was a teenager, there is even more blurring between adult and juvenile realms, particularly on the chaotic scene of a film or a movie. Hoffman may just be telling the truth: that in his crude way he was attempting to make Anna Graham Hunter feel a part of the family that develops on the highly emotional set of a shoot.

It’s good to check such behavior when it’s inappropriate, and good that post-Weinstein people now accept this new reality. But Oliver’s grand jury preening was not about a re-evaluation of such behavior in the context of history, the arts, a movie set, and 1985. Oliver’s preening was all about Oliver being a chest-thumping White Knight. Far from a warrior, John Oliver is a twat who represents the killjoy left that wants to censor comics, comedy, and art.

Dustin Hoffman may owe Anna Graham Hunter yet another apology. But he doesn’t deserve the stockade.