The Hand of Fate 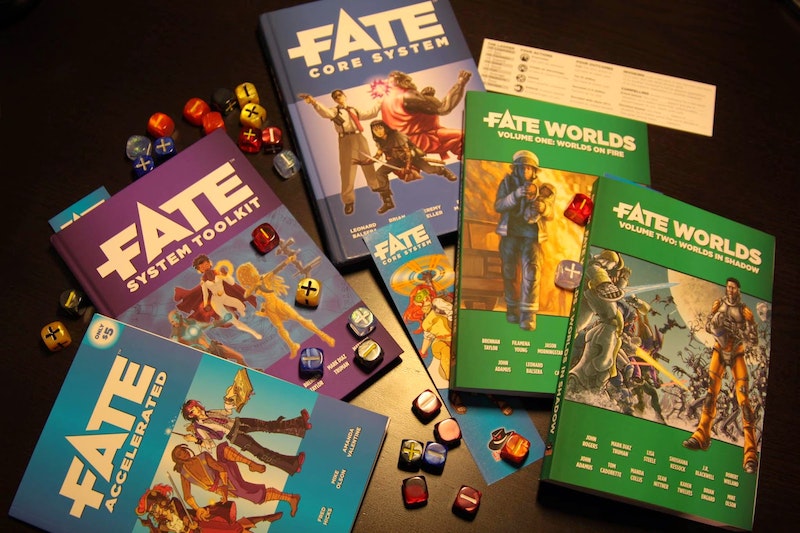 I remember when I first started playing Dungeons & Dragons, and having a moment where I felt like my imagination activated. Soon, I began crafting Tolkienesque worlds, larger than life villains, and perilous quests. But I distinctly remember when I wanted to expand my roleplaying game palette, going beyond D&D to find something different.

I went in looking for a universal system, like GURPS, but I ended up learning about a new system called Fate Core. I was immediately drawn to the system's sheer flexibility and modularity, allowing me to play in any setting and easily tweak the rules for whatever I was playing. Furthermore, it allows me to model whatever I need mechanically to a degree that I wasn't able to get in D&D. It quickly became my RPG system of choice.

There's an appeal to the more narrative focus of the game, where I spent less time looking in the rule book for the sake of minutia. For my less mathematically-inclined players, they had to spend less time crunching numbers. Character creation is also collaborative in nature, allowing players to build intertwined character backstories.

Publisher Evil Hat has produced a variety of rules supplements known as Toolkits and premade adventures under the Fate Worlds line. Additionally, they even offer a more lightweight version of the game known as Fate Accelerated, which I often use for one-shot campaigns due to its emphasis on easy character creation. Even though the game hasn't been around for as long as one like D&D, there's still a lot of material out there to glean mechanics and settings from.

I still enjoy playing Dungeons & Dragons, and there's no real substitute for that game's dungeon crawling prowess. But I find myself coming back to the world of Fate Core again and again for any new idea that I come up with. With a flexible, easy to understand set of rules that allow for flexibility, I can produce anything from a steampunk adventure to a gothic horror vampire hunt. In many ways, I think Fate Core has opened my eyes up to a world of imagination that even I couldn't have predicted.