Aretha at 29, and my teenage friend Elena Seibert. 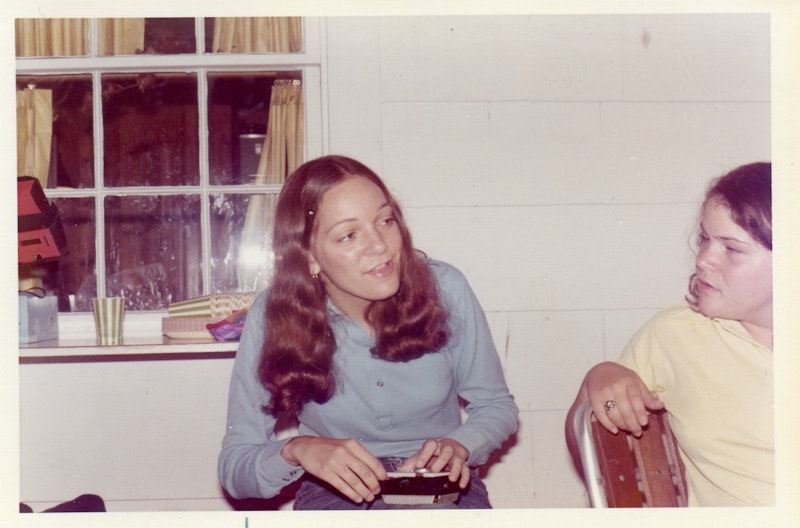 While watching the technically flawed but dazzling Amazing Grace last weekend at the Charles Theater in Baltimore, two streams of thought went through my mind as an in-her-prime Aretha Franklin (29 and radiant) belts out traditional gospel songs at the New Temple Missionary Baptist Church in Los Angeles. (The film, scheduled for release in 1972, was held up for a slew of reasons, Hollywood stuff, and finally hit the screens this year.)

Steely Dan’s 1980 song “Hey Nineteen” immediately cropped up, obviously for the lyrics, “Hey Nineteen/That’s ‘Retha Franklin/She don’t remember/The Queen of Soul/It’s hard times befallen/The Soul Survivors/She thinks I’m crazy/But I’m just getting old.” I never cared for “Hey Nineteen” (a Steely Dan fan in the mid-1970s, I never listened much after The Royal Scam), since it seemed implausible that a woman born in 1961 had never heard of Aretha, but just the mention of the “Queen of Soul” in a pop hit was notable.

More significantly, I wondered whether my longtime friend Elena Seibert (I took this snapshot of her in 1972)—we met in 1968 at Simpson Jr. High in Huntington, New York—had already seen Amazing Grace (naturally, it debuted in NYC, where she lives) and I would’ve bet $20 that she had. (Incidentally, with all the foot-dragging over replacing Old Hickory on the $20 bill—whether it’s Harriet Tubman, Al Sharpton or Susan Sontag—paper currency will be kaput before the change is made.) Turns out I was wrong, as Elena confirmed a few days ago, but she will soon.

Unless you’re a loner or outcast, people run in different circles after eighth grade or so, and Elena was in a sphere that didn’t overlap much with my more rambunctious, mischievous male buddies. Elena lived in Halesite, not a long walk—and quicker bike ride, and later, trip in the car—from my house off Southdown Rd. Her dad, a quiet, respectful man, owned a local pharmacy, and her mom, from Bulgaria, was one of the most remarkable women I’d met at that point in my life. I spent a lot of afternoons hanging out at the Seibert household, and Elena’s older brother Fred first turned me onto jazz—Miles, Sun Ra, Coltrane, Charlie Parker—which was a revelation since I was mostly a Dylan/Stones/Motown/Stax/Byrds/country/Kinks devotee.

Elena wasn’t big on the Stones—in fact, when we went to see the band in 1972 at Madison Square Garden, she joked to security guards that we just came to see the opening act, Stevie Wonder—but we shared a love of soul, and Aretha was near or at the top of the list. We both, to this day, favor Aretha Live At Fillmore West most of all, with that haunting “Spirit in the Dark” (with Ray Charles, her band led by King Curtis, murdered just months after the record came out in ’71). And, like anyone with a modicum of taste, we turned up the Top 40 radio (or WNEW-FM) when hits like “Respect,” “Chain of Fools,” “(You Make Me Feel Like) A Natural Woman,” “Think,” “Rock Steady” and “Until You Come Back to Me” were played.

Elena, in other words, was very cool. Part of that was she wasn’t at all judgmental (at least with me): she didn’t smoke cigarettes or pot, drink much, but my own behavior in that arena wasn’t an issue. I remember one beautiful October night in 1971 when a couple of buddies and I were mildly tripping on mescaline, and a troublemaker, pissed he wasn’t asked to drop along with us, was the driver, and to my mortification took us to Elena’s house, where her parents were entertaining 15 or 20 guests. It was a malicious move, but I negotiated a tense situation rather nimbly (though terrified) and if Elena was on to me, she didn’t say, and the subject didn’t come up the next day. As opposed to the prick with the VW, whose father’s dog was nicknamed “Nigger,” who blabbed about the incident at school the next day, after telling me, doing an Art Linkletter, that I’d never be able to have children because of ingesting a psychedelic. I knew that was bullshit, but did wonder why I hung out with this guy (although, to be fair, in non-vindictive moments, he could be a stitch and double us up with laughter).

Like a lot of Huntington teens, we hung out at the great independent bookstore Oscar’s, Kropotkin Records, Friendly’s and Heckscher Park, and, on occasion, the Walt Whitman Mall. Elena wasn’t predictable in her music choices: for example, she wore out the grooves of the splintered Rascals’ mildly interesting (to me) Peaceful World, which came out in ’71, and didn’t touch the success of the band’s earlier hits. Nonetheless, Elena was keen on leader Felix Cavaliere (“Fe”) and remained so for a couple of years.

My family moved to a town outside Trenton, NJ in June, 1972 and I spent a miserable senior year at a redneck high school in Lawrence but Elena and I wrote each other weekly, or more, and traded info on books we’d read, current movies, new music and she’d fill me in on the Huntington gossip. I looked forward to that mail, as it was a salve from daily grind of being an unwelcome hippie at a school where dress codes were strictly enforced, and pre-MAGA goons ruled the hallways. (One guy, who wasn’t stupid, just a creep, taunted me in gym because I’d read a book while others were wrestling; near the end of the school year when he found out I was accepted at Johns Hopkins he changed his tune and turned on the schmooze. I told him to fuck off and our paths never crossed again.)

One caper Elena and I pulled off weekly was arranging a time to gab on the phone, the code “TRO” (telephone rip-off) communicated by mail, where I’d drive to a pay booth outside of a local Howard Johnson’s and she’d call me collect. Sounds quaint today, but in ’73 long-distance calls weren’t cheap. I guess it was theft of a sort, but we felt it was a Power to the People maneuver (not really, we just liked to talk) and no one was the wiser.

Years later, Elena became a well-known photojournalist and the stories she told me about various celebrities she shot for major magazines and newspapers (discretion prevents me from divulging details) were hilarious. She once told an actor in his prime, who was difficult, that she didn’t have time for his bullshit and walked out of the hotel suite. The publicist retrieved her and the star was apologetic. She didn’t take shit from no one. As I recall, Elena got her big break in ’87 when she happened to spy fussbudget New Yorker editor William Shawn sitting alone in a restaurant, just after his regime was throttled at the weekly, and her picture went, in 2010 parlance, viral. The next day she called me in Baltimore and I just marveled at both her luck and, more crucially, ingenuity.

A few of Elena’s photos appeared in New York Press, as a favor, and I would’ve loved to feature her work regularly, but she was too busy with high-paying jobs, which I completely understood. Today, the print industry has collapsed, but Elena, now that her two wonderful children are grown, keeps working. And is better than ever.