Down With Bizarro Communism!

Superman am hero, or the opposite. 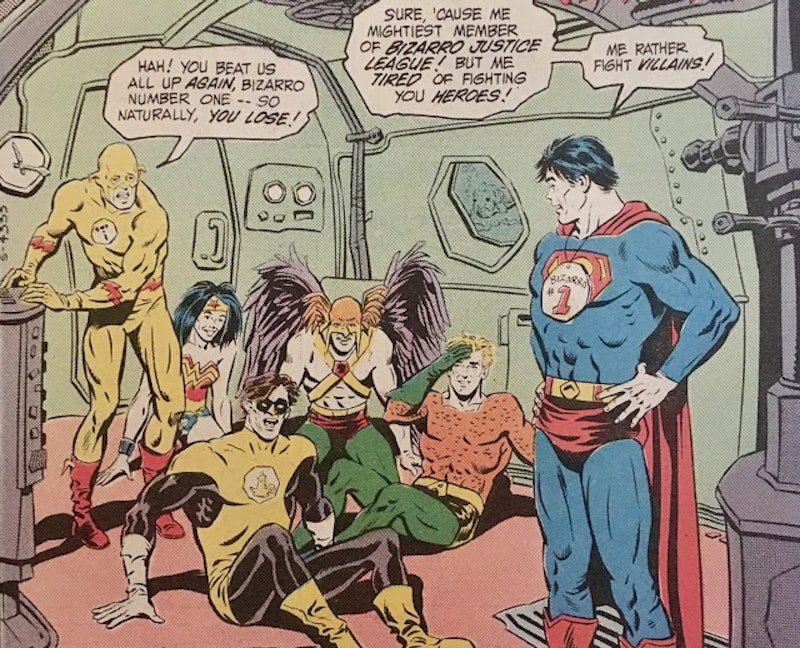 This is part of a series of posts rereading comics from my childhood. The last one on Brave and Bold: Batman and the Metal Men is here.

“Superman and Bizarro: The Mark of Bizarro!”

Bizarro stories are always about how being different is bizarre. "Bizarre" is, potentially, entertaining to think about. But it's also beyond the pale and ridiculous. Bizarro imagines how the world could be different—and then dismisses those imaginings in order to reaffirm the status quo.

DC Comics Presents: Superman and Bizarro #71 from July 1984 is a good illustration of the Bizarro formula. Bizarro, as every Superfan knows, is an imperfect chalk-white Superman duplicate, created by an imperfect duplicator ray. Bizarro knew he didn't fit in on earth, so he used the duplicator ray to create other Bizarro Supermen and Bizarro versions of Superman villains and friends. Then they all flew off to create a square world where the one rule is that "Things must be done contrary to the way they are done on earth," as this issue's writer, E. Nelson Bridwell explains. Women give men candy on New Year's Eve rather than on Valentine's Day. The greatest hero is Yellow Lantern because he’s a coward and (unlike the typical Bizarro Superman) has no powers. The Joker spends all his time crying because he’s the only one on the planet who isn't insane.

Bizarro Joker's unusual sadness highlights one of the contradictions of the Bizarro story. The Bizarro world is supposed to be wrong and ridiculous, but actually seems like a pretty nice place to live. All the Bizarros live in harmony, committed to their law of not being like Earth. And while Superman is always fighting bad guys motivated by greed or dreams of conquest, Bizarro heroes mostly fight villains for fun to see who can win by losing.

In order to lose more often and more thoroughly, Bizarro decides to create a Bizarro version of Amazo, a robot who absorbs superpowers. Unlike the original Amazo, who absorbed powers and kept them for himself, Bizarro Amazo redistributes them to the un-super. So, after his creation, he flies around the Bizarro world enacting a kind of super-power communism—or a super-power gender revolution, since the non-super-powered are mostly Bizarro Lois Lanes. Amazo takes from the super and gives to the non-super, turning everything on the topsy-turvy world more topsy-turvy.

Eventually, Amazo gets bored on Bizarro world, and flies off to earth to continue his redistributionist project. The result is chaos; Superman's reporter pal Jimmy Olsen suddenly gains super-speed and runs through a wall. Morgan Edge, the boss of the Daily Planet, suddenly gains super-strength and smashes his own desk, and so forth. Normal people don't know how to handle sudden super-powers, upending the hierarchy results in chaos, comedy, and disaster.

That might be okay on Bizarro world: "Me so Happy! Me can't beat him! So me always winner!" Bizarro declares. But Superman replies, "Logic like that is all right on your world—but not here!" In the real world, everything needs to stay in its place. The last have to stay last and the first, first, or else.

Superman ultimately defeats Bizarro Amazo's super-Communism by teaching him the virtues of greed. Superman and Bizarro trick Bizarro Amazo into thinking he's becoming weak because he's given away too many powers. Newly converted to the capitalist ethos of selfishness, Amazo does what capitalists are supposed to do and decides that self-interest requires him to horde all available resources. He takes back all the powers he granted others, and both Earth and Bizarro world are returned to normal.

This is supposed to be a happy ending—but it's not entirely convincing. Superman's rationale for making Amazo take back the powers is, again, that people without powers can't use them wisely or well. Men claimed that the world would fall apart if women got the vote; white people claimed that evil would result if black people got the vote, and Superman assures us that people will hurt themselves if they're given superpowers. In fact, in the comic, people adjust to power quite quickly. Jimmy Olsen learns to fly without much trouble and cheerfully takes pictures for the Daily Planet of the Amazo fight. He's only endangered when Bizarro Amazo takes away his powers, causing him to fall from 30 stories up (Superman catches him—but only at the last minute, as if to punish Jimmy for getting above himself.)

Similarly, Morgan Edge is just happy with his newfound superstrength; he's practicing on a wall when Bizarro Amazo takes away his powers, causing him to badly hurt his hand. Rather than protecting people, Superman's actions serve to put them in more danger. Fighting Bizarro Amazo is less about justice or safety than about putting everyone back in their proper station.

Back on Bizarro world, Bizarro Superman reminds Bizarro Amazo that the real goal of a Bizarro supervillain is to be powerless, not powerful. Amazo gives all the Bizarro Supermen back their powers, and then, to be the very best villain of all, he shuts himself off. As a Bizarro Lois declares staring at the inert Amazo, "No wonder everyone admires him! Us merely think stupid—him not think at all!"

"Thinking stupid" in the context of the comic means imagining a world in which being powerful doesn't make you more admired, and the weak get to punch through walls. Altruism and equality are as preposterous as a square world. On the round Earth, though, heroes aren't there to lift others up, but to keep them down. Bizarro thinks it’s fun to surround himself with equals because he's insane. Sober heroes, in contrast, know it's their job to police the boundaries of power. Superman is admirable and rational, supposedly, because he makes sure he's the only one who can fly.