The right isn't happy now that Chick-fil-a will no longer donate to anti-LGBT organizations. 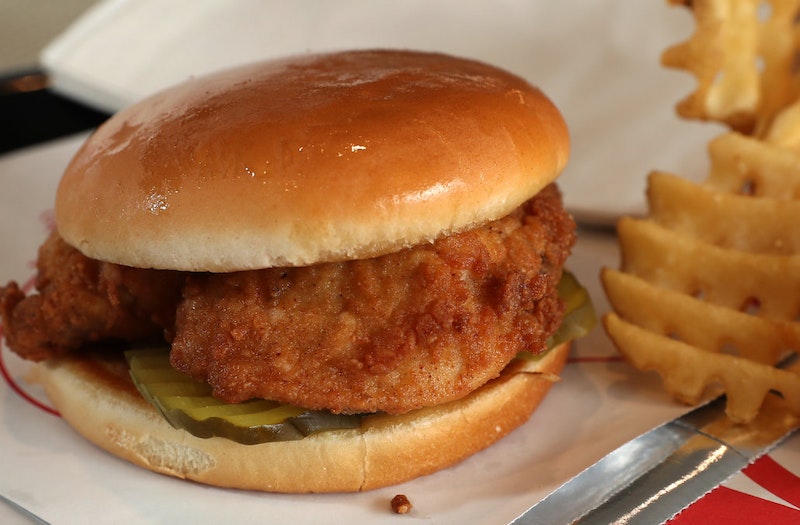 Chick-fil-A announced Monday that they’ll no longer donate proceeds to anti-LGBTQ organizations after years of boycotts. According to a press release, the fast food chain will stop giving to the Fellowship of Christian Athletes and the Salvation Army—two religious organizations with histories of anti-LGBTQ policies—in favor of organizations that focus on education, homelessness, and hunger. “We made multiyear commitments to both organizations [the Fellowship of Christian Athletes and the Salvation Army], and we fulfilled those obligations in 2018,” a representative told Business Insider. Chick-fil-A already stopped donating to anti-marriage equality organizations in 2012—shortly after the boycotts started—and many LGBTQ rights activists see the latest announcement as another positive step forward.

The Right, however, isn’t happy. Former presidential candidate Mike Huckabee tweeted that Chick-fil-A “surrendered to anti- Christian hate groups” and “betrayed loyal customers.” Conservative personality/writer Ben Shapiro declared that the recent announcement is “the latest indicator that the center cannot hold.” Even gay libertarian Dave Rubin voiced his opposition, saying that he was going to stop eating there and go “back to the home cooked frying pan.” For people who claim to be against Cancel Culture, they’re quick to ditch Chick-fil-A.

What conservative critics don’t understand is that this isn’t another case of “left-wing mobs” run amok; it’s simply capitalism at work. Chick-fil-A has the right to donate proceeds to any charity, and I have the right not to give them money. Why would I, knowing that part of my money might go towards an organization fighting against my civil rights? If the CEOs and COOs of Chick-fil-A kept their personal beliefs about marriage to themselves, that wouldn’t be an issue. I don’t care what people personally believe; I only care if their beliefs influence their actions.

I still won’t eat at Chick-fil-A anytime soon because they don’t have explicit anti-discrimination policies against LGBTQ workers. According to their website, “We do not discriminate in employment decisions based upon sex, gender, race, color, religion, national origin, ancestry, citizenship, pregnancy, age, physical or mental disability, genetic information, military or veteran status, and/or any other status, classification or factor, protected by federal, state or local law.”

One could argue that listing both sex and gender means at least trans employees are protected, but as The Advocate points out, neither sexual orientation or gender identity are federally protected, and there are still several states where it’s legal to fire an employee for being LGBTQ. Chick-fil-A is also not listed in the Human Rights Campaign’s Corporate Equality Index, and the HRC’s Buying for Workplace Equality Guide has given the company a zero rating. Current Chick-fil-A President and COO Tim Tassopoulos recently told Vice, “No organization will be excluded from future consideration [for charity donations]—faith-based or non-faith-based,” which suggests that Chick-fil-A might donate to anti-LGBTQ causes in the future.

It’s possible that Chick-fil-A’s recent decision has more to do with PR than a change of heart. Tassopoulos probably saw how popular Popeye’s chicken sandwich—popular enough for people to stab each other for—along with the backlash against the UK’s first Chick-fil-A opening, and decided to fix the fast food chain’s image. Or it could just be my personal bias talking since I’m skeptical of any corporation that markets itself as pro-social justice while still operating under a capitalist system.