Mister Rogers always made me suspicious—can there ever be an American Bodhisattva? 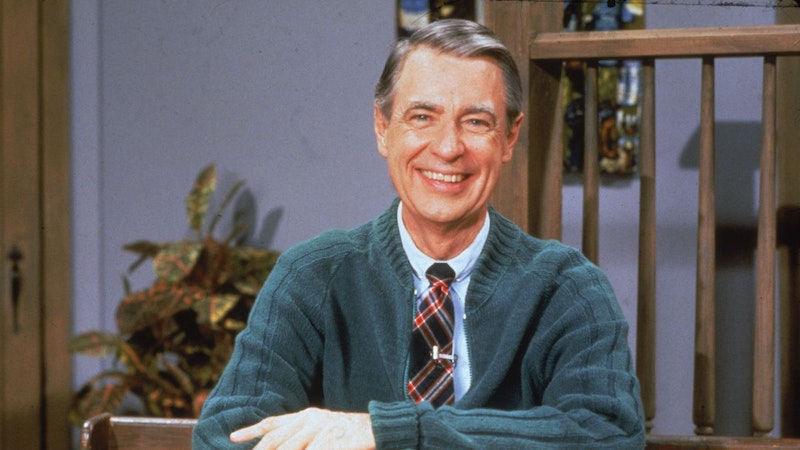 I didn’t see Won’t You Be My Neighbor, last year’s successful documentary about Fred Rogers. Apparently, he’s the Buddha we need: the new Hollywood adaptation starring Tom Hanks is billed with this tagline above the title: “We could all use a little kindness.” The Hanks film is called A Beautiful Day in the Neighborhood, and I’m sure you’re aware of it because trailers, television spots, and internet ads have been running since the summer. All of a sudden we need Mr. Rogers’ benevolence. Why? His show always creeped me out as a kid, he scanned as an adult not to be trusted, even if everything he was saying was ostensibly correct. But I never stuck around long enough to learn about divorce, religion, war, suicide, or death from that cardigan charlatan.

Suffice it to say, I do not share Anne Helen Peterson’s affinity for the deceased television host. In a piece for BuzzFeed News titled “Mister Rogers and the Dark Abyss of the Adult Soul,” she begins by describing the “intensely terrifying” experiences of deep meditation, yoga, and marathon running, activities “which make the body un-ignorable, the mind inescapable.” In these situations, people often cry a lot and easily. And she says that this, this supreme feeling of one-ness and total vulnerability that makes people cry involuntarily, is why people love Mister Rogers and respond to him with automatic waterworks. Even I’m not immune: the trailer for this Tom Hanks movie ends in a painful subway singalong of the Mister Rogers theme song, spontaneous of course as the whole subway car full of New Yorkers in 1998 are eager to sing Mister Rogers his own song.

Mister Rogers is a false prophet and a teacher for idiot kids. In the film, Matthew Rhys plays Lloyd Vogel, a reporter for Esquire assigned to profile Fred Rogers for a “heroes” issue. Vogel, loosely based on Junod, is jaded and bitter and defeated and quick to violence. In other words, the perfect foil for Tom Hanks’ morality play, his earnest attempt at a third Oscar. People take Tom Hanks for granted for good reason: he’s an enormously boring actor that belongs to a prior era, when movie stars were archetypal. Hanks, like Leonardo DiCaprio, has no social media presence, because that is where most of the entertainment industry has demystified itself over the past decade. For years, the hack joke about Twitter was being able to find out what your favorite Kardashian “was eating for breakfast” or whatever, but this focus on the trivial has destroyed the larger than life actor personality that can exist simply in the work, whether it’s on screen or in carefully planned PR stunts or projects, like DiCaprio’s climate obsession.

I will see neither Mister Rogers movie because I admit, the trailers for both make me well up every single fucking time. I don’t trust that material, it’s too easy, it’s false relief, and I felt that way when Mister Rogers was still alive and on his last legs. I remember when he died and being unbelievably bored and nauseated by the endless coverage of him and reruns and tributes. Good lord. Mister Rogers is not a complicated figure, he’s not a challenging man to portray. He’s a Christ figure—in other words, boring and self righteous. I sort of wish Junod had actually found some dirt on him. There are no American Bodhisattvas, and if there are, they never wore cardigans.