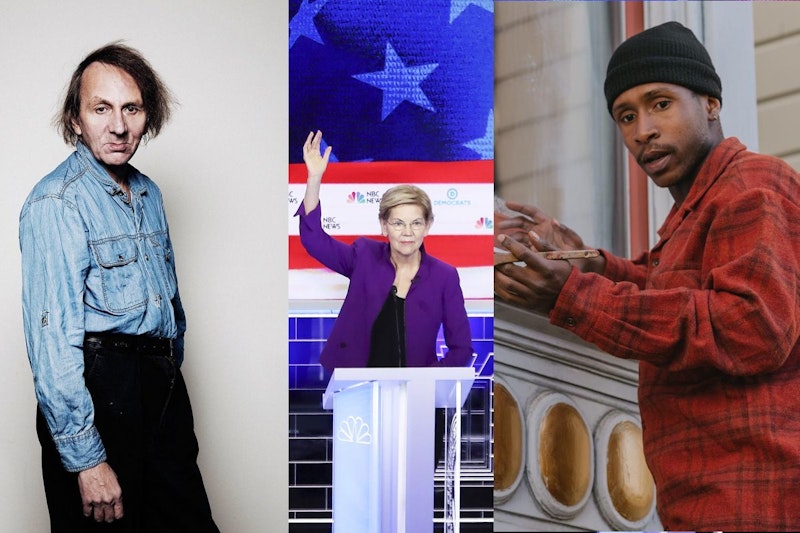 I was going to watch the first DNC debate—but my appetite for a cattle call on stage reduced to repeating platitudes and bumper-sticker slogans has diminished significantly since the raucous and unpredictable GOP debates in 2015 and 2016. How can any of these DNC debates compete? All of the candidates are unbelievably boring, and even though I like Elizabeth Warren, she’ll be pulverized if put up against Trump. She has no sense of humor, looks like a stiff on stage, and doesn’t know how to operate in a campaign where the parameters are changed. She often gets compared to Lisa Simpson, but I think that’s unfair to Lisa, who was always so much cooler and radical than Warren will ever be. At least Hillary had the steely reserve and rehearsed moves of an autocrat. But I didn’t drink enough coffee on Wednesday and took a nap at seven, dozing off with Michel Houellebecq’s Submission by my side (his 2015 novel, coincidentally released on the same day as the Charlie Hebdo shooting, imagines a France ruled by sharia law in 2022⁠—but as usual with him, it’s mostly about academic disaffection, fucking, and not being allowed to smoke inside).

Early on, Submission’s narrator François presages the moment we’re in now: “I’ve always loved election night. I’d go so far as to say it’s my favorite TV show, after the World Cup finals. Obviously there was less suspense in elections, since, according to their peculiar narrative structure, you knew from the first minutes how they would end, but the wide range of actors (the political scientists, the pundits, the crowds of supporters cheering or in tears at party headquarters… and the politicians, in the heat of the moment, with their thoughtful or passionate declarations) and the general excitement of the participants really gave you the feeling, so rare, so precious, so telegenic, that history was coming to you live.”

I thought the same thing as I dozed off just two hours before the debate—I thought about how, at that moment, Warren was deep in prep, maybe panicking, along with everybody else. And when I woke up around 9:45, I turned it on and the first thing I saw was Warren’s rictus face frozen while NBC had some serious technical difficulties with hot mics everywhere in the arena. Once Chuck Todd and Rachel Maddow (two of the ugliest people on TV) started carrying on with some cutesy Oscars-style rapport, I turned it off in disgust and watched Jean-Luc Godard’s The Image Book for the sixth time. I practically have it memorized now, and its opening statement—“World’s masters should be wary of Bécassine: she is silent”—was some salve after facing the depressing likelihood of a second Trump term.

Liberals, centrists, and the left remain fatally fractured, unable to compete with Trump’s vulgar caveman maneuvering. A day before the first debate, I saw Joe Talbot’s The Last Black Man in San Francisco, an elegy to the Bay Area and everyone kicked out by its men in high castles making billions from startups and social media, the former disrupting reliable industries and the latter, perhaps the worst thing to happen to humanity since fast food or pharmaceuticals. Talbot’s film is another crying in your lap exercise, shot in amber tones with the beatific eye of Barry Jenkins’ previous two films. It’s all sad eyes and maudlin music underscoring what was already subtle and dramatic to survive on its own. Unlike Sorry to Bother You or BlacKkKlansman, The Last Black Man in San Francisco is pretty pathetic. But I’ll recommend the film because it’s refreshingly ambiguous and elliptical, the kind of movie that keeps you guessing what kind of movie it is throughout. Unlike Sorry to Bother You, the dystopia of the Bay Area is only hinted at, hanging out on the periphery. This is great: a movie where you see brief moments in the background, or throwaway scenes that suggest other films, other stories occurring simultaneously.

But what I find so disappointing about Talbot’s film is how maddeningly maudlin it is, how mopey and weak its characters are. It has the atmosphere of a dream but ends on an image befitting a Marvel movie: the lead sailing into the sunset on the Bay. The touch becomes less graceful as the film goes on, and while it’s subtle for most of its two hours, it falls back on stiff seriousness and notions of high art, near religious. It’s not irreverent, unpredictable, or original: but it’s elusive, and when pickings are slim at cineplexes, I recommend any film that, for the most part, refuses easy interpretation.

But thinking of the debates, and Trump’s singular ability to out-maneuver the media and keep people in his camps (MAGA and Mexican), I’m reminded of an article my dad wrote in early 2016 when my family saw The Witch and Deadpool back to back, shortly after the primaries had begun. He wrote at the time that the stiff, consciously arty Witch represented Hillary; and the messy, rude, and wildly fun Deadpool was Trump. “Get Ready for President Deadpool” is still sound advice, and sorry centrists, Joe Biden just doesn’t fit the bill, even if Deadpool’s scarred face pictured in that article really does resemble the former Vice President. Houellebecq sings, or maybe he just smokes, as he watches from afar. By the time his latest novel Serotonin is published in English this September, we’ll have a slightly better idea of who’ll face Trump, and if we have another four years of President Kill to look forward to. Come sail away and prepare for submission.