I sat through a class filled with Patrick Bateman’s future victims. 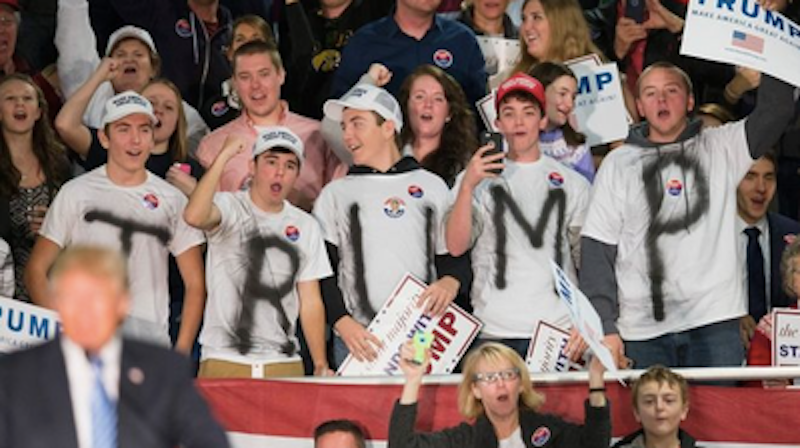 College students are supposed to be liberal, right? I’m a third-year English major at George Washington University and, up until January 11, 2016, I’d only encountered passive nonpartisans and full-blown Sanders-ites. In hindsight, I might’ve unintentionally insulated myself with Democrats, a function of hanging out only with other English majors. Call me close-minded, but the rest of the school weirds me out. GW is dense with overly-ambitious, no-follow-through students who love referring to themselves as “Type-A personalities.” They’re always looking for someone to proofread their resume. Not my scene.

That illusion was shattered when I walked into my first class of the spring semester, The Modern American Presidency. I wanted to peek outside the halls of the English department before graduating this summer. Bad move. I immediately felt out of place: half the kids wore suits, looking like they were cosplaying as businessmen; the other half looked like Vineyard Vines mannequins, expressionless in pastel vests. I sat in the back row, next to two chatty pre-law history majors. One of them was talking about seeing Billy Joel at Madison Square Garden—“He’s really the best out there doing it, concert-wise, at least, and, I mean, it’s clear that he’s not in it for the money, y’know, he’s just got this pure love of performing”—as the other re-laced his Timberlands.

The professor proposed an ice-breaker when he walked in: state your name, hometown, and favorite president. I started, choosing Teddy Roosevelt. Fairly innocuous, I thought, a common choice. But no. Half of the 40 students picked Ronald Reagan. Seven (!) kids picked Nixon. Two picked George H. W. Bush. I was in a room full of Alex P. Keatons, full of Patrick Bateman’s future victims. Had I stood up and screamed “HEDGE FUND,” all of the dudes would’ve popped a half-chub. Bad vibes, man. I dropped the class as soon as I got home and switched into 20th Century American Drama.

I hate most Republicans. Actually, I hate the people that Donald Trump panders to, the bigoted, xenophobic, violent right-wingers who sucker-punch protesters and promote misogyny. While driving home from my friend’s house last week, I stopped at a red light, behind a pick-up truck that was flying the confederate flag, bumper plastered with three “TRUMP: Make America Great Again!” stickers. I mean, come on, how can you not hate that guy, so brazen with his prejudice, proclaiming his ignorance without shame?

It should be noted that most of Trump’s supporters are uneducated. According to The Atlantic’s Derek Thompson, “The single best predictor of Trump support in the GOP primary is the absence of a college degree.” If anything, this just makes Trump more of a super-villain, a predator, herding in his supporters like mindless sheep, telling them what they want to hear.

The young Republicans I encountered were slimy for the same reason. When they support Trump as the nominee—if they don’t already—they’ll knowingly be pushing aside minorities in favor of self-interest. And here’s the worst part: they know they’re wrong. According to Jocelyn Kiley and Michael Dimock, of the Pew Research Center, millennial Republicans “say immigrants strengthen our country with their hard work and talents, while older Republicans say immigrants are a burden on our country by taking our jobs, housing and health care.” Unlike Trump’s herd of idiots—who, because they’re racist xenophobes, really think that he will “Make America Great Again”—his educated supporters are simply looking out for themselves, attracted by his vague fiscal policies.

But what’s in it for the young Republicans? They’re college students. Unless they’re trustafarians, they don’t have any money of their own. They have more to gain, individually, from four years of Clinton than four of Trump. Then again, maybe they’re ambitious. Maybe they plan on being millionaires by the time they’re 30.

The social views of millennial conservatives skew liberal. That means that despite having social views that line up with their liberal peers, they’ll still vote for the racist candidate out of obligation to some financial fantasy. They’re self-interested robots without empathy. Slimy sycophants. And they like Billy Joel. I’m glad I stuck to the English department.