Gimme putt or turmoil? You make the call. 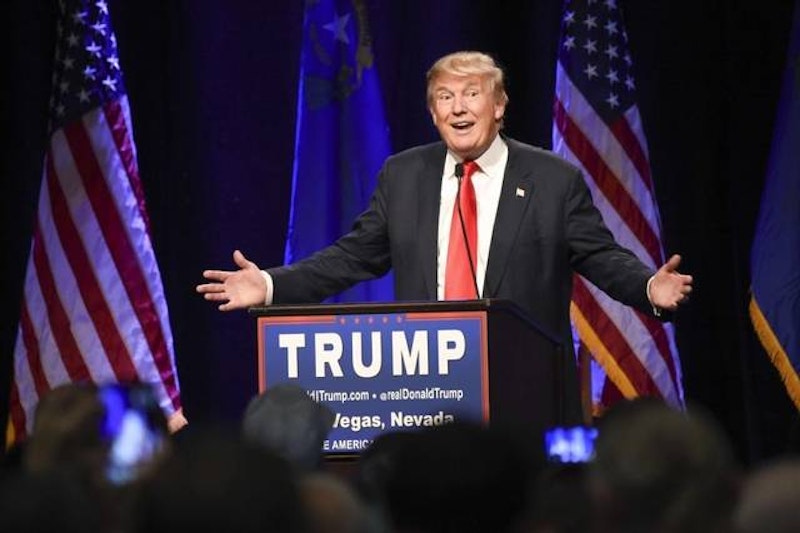 The negative ads didn’t leave a dent. Marco Rubio died against a wall; the thing called Trump bore down upon him, sweeping Florida in its path. The Donald Trump menace also took Illinois and North Carolina, the first by a good margin and the second by a few points. Trump’s competition in those states was Ted Cruz, who tied with Trump in Missouri and looked likely to split its delegates half and half. That leaves Ohio, the night’s fifth state. It went to its governor, John Kasich, and that setback marred a very good night for Trump. Marred it enough that the people on Fox were talking about gimme putts.

When the ball isn’t too many feet from the hole, sometimes the golfer isn’t required to tap it in. Instead gentlemen agree that the thing is close enough. The Fox team said Trump may get the nomination that way. Not with a majority of delegates, just with a number that comes awfully close. This is a new one on me. I thought close only counted in horseshoes. Now it counts in golf, in presidential nominations, who knows what else. Well, a party does what it must. The Republican Party has to nominate somebody. If he’s this short of the requirement, help him along. Unless he’s that short, a yard or so. But even then they’d be smart to hand him the prize.

No matter how short he falls of 1237 delegates, Trump will figure he deserves the nomination. If he doesn’t get it, he will make as much trouble as he can. In the GOP’s situation, the potential for such trouble is immense. Trump might (by which I mean will almost certainly) run third party, and the Republicans will see a fleet of states turn blue. And the big guy might make trouble at the convention. Good luck keeping his fans out of the upper seats; they’re going to show and deference is not their strong point. Also, one reads that Cleveland is in an open-carry state.

Only Trump can win on a first ballot, and a second ballot could uncork turmoil. Once the first ballot is done, about 75 percent of the delegates can ignore their states’ voting returns and pick whichever of the candidates they prefer. That leaves a lot of free agents wandering about. Worse, only 27 percent of the convention delegates will have been chosen by the candidates themselves. The rest won’t be there because of the candidate they back but because members of their state party chose them for the honor of attending the convention. Cruz or Kasich or Rubio fans who had to vote for Trump on the first round can drop him starting with the second ballot. The same applies to Trump fans who had to vote for one of the runner-up candidates.

As the ballots continue, delegates can switch back and forth, go from a second choice to a third and back again. There’s no telling how long they’ll take or which of the candidates they’ll settle on. We just know they’ll do their conferring inside an arena loaded with angry people who feel cheated. Unless the convention organizers get tough and ban guns on the premises, some of the angry people may be armed.

How does a party get in such a fix? Well, that’s one reason America’s past 40 years will be so interesting when historians write them up. For now, we know the Republican Party must hand its balls to Donald Trump. At Kennebunkport they should be rooting for him to hit 1237. Because if he doesn’t, the party will have to act like he did. It will have to be the nervous stiff who doesn’t say anything when the car gets scratched. Otherwise Trump and his followers will get mad.