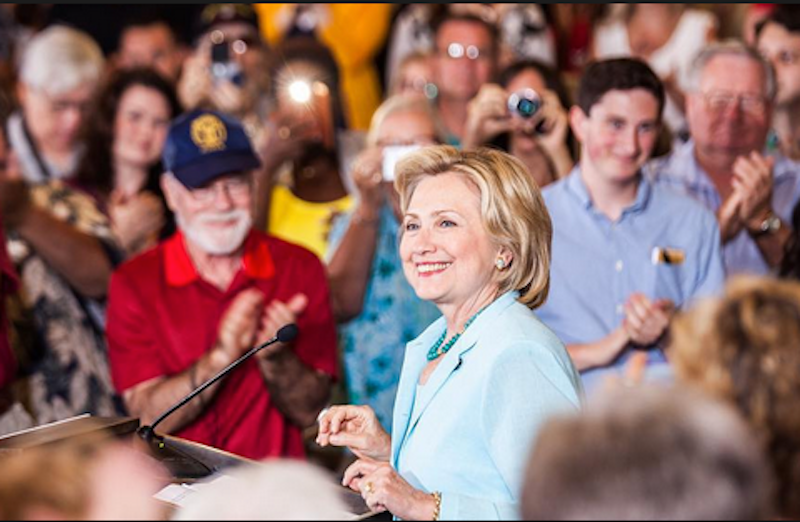 Despite the awe and terror with which people watch Donald Trump, remember that the most likely outcome of the November election is President Hillary Clinton, and quite possibly a Democratic Senate to go with her.

While some conspiracy theorists talk as if only Trump can save us from the establishment, to me one of the more plausible-sounding conspiracy theories floating around is the idea that Trump and the Clintons may have worked out a deal whereby he would behave like the most easily-defeated possible buffoon for her (and the p.c. mainstream media) to battle and beat in the general election. Watch for her to throw him some surprising bone like appointment as Commerce Secretary when it’s all over, or for him to donate a billion dollars to the Clinton Foundation. Then, perhaps, we’ll know, or at least strongly suspect.

In a sense, then, too much time has been wasted marveling at the damage Trump is doing to the conservative establishment. The real damage will almost certainly come in seven months in the far more familiar, almost comforting form of big vote totals for one of the most painfully mainstream women ever to run for elected office. To get ahead of the game intellectually, maybe pundits should stop worrying about internal Republican Party battles—conservatism vs. populism, conservatism vs. libertarianism, rural vs. cosmopolitan, etc.—because there won’t really be a Republican Party to speak of, just a smoldering ruin. Instead, get used to the idea of one-party rule, the way things were for decades in Mexico (of all places), except it will be Democrats.

When there’s any hint of a Republican resurgence or reinvention, terrifying tales of things that the last-major-Republican-candidate-ever said during his ridiculous 2016 campaign will easily be trotted out to remind people we don’t ever want to go back to the dark times. That won’t be enough to make the GOP literally cease to exist, but it will suffice to ensure it dare not do anything except echo the one real political party, the Democrats, in much the way that you rarely hear the Conservative Party in England talk in any serious way about dismantling the welfare state the left created.

What will take the place of the old philosophical battles?

I think this campaign season has made it clear to everyone that utterly petty topics will always suffice to keep the masses distracted no matter how large the country’s real problems loom. People are always better at spotting hypocrisy than bad policy arguments, so we’ll continue, perhaps forever, to point out when specific individual politicians flip-flop or do something contrary to their previously stated positions. They could keep us distracted for another century or two by railing against indecency and then hiring prostitutes, for example, if they so chose.

Hypocrisy-spotting rarely tells us anything at all about what their positions should be, but it’s great for character assassination purposes and maintaining the status quo. Hypocrisy-spotting is already the bulk of our political discourse, and that won’t change if half the political spectrum effectively retreats from the field of battle.

And what will the government actually be doing all that time, while we’re distracted?

A woman who worked in the previous Clinton regime told me you’d be surprised how much of the White House’s time is just spent behaving like an overseas public relations firm trying to convince foreign governments to do business with the U.S. (so in that sense maybe it doesn’t matter whether “deal-making” Trump or international-foundation-running Clinton gets in).

And a man running for a state legislator position told me recently that he’s found most state and local government activity revolves around trying to bribe companies (with public money) to stay in the area; rather than worrying about corporate money flowing to politicians, we may need to spend more time worrying about money flowing from politicians to companies. As usual, conventional elite wisdom has it both upside-down and backwards at the same time.

Hillary loves this game of symbiotic public/private bribing and soliciting of bribes (don’t make the mistake of thinking you can spot who’s really in charge—it’s a continuous loop that simply doesn’t contain you). Trump has played this game, too, as he happily admits. I can’t imagine Chris Christie’s eerie, zombie-like endorsement of Trump—who as you may recall has done a lot of business in New Jersey—was motivated by a review of philosophical first principles.

Part of the Dem advantage for the foreseeable future will be having a mushy, half-government, half-corporate philosophy that makes it much harder to tell when they’re being hypocrites than to spot “limited-government” Republicans doling out subsidies. That doesn’t make the Democrats any less destructive, as I suspect we’ll soon see. It just makes it harder to catch them violating their own vague promises. So maybe soon we’ll get tired of trying and just settle in to being slowly crushed by the Clinton machine.