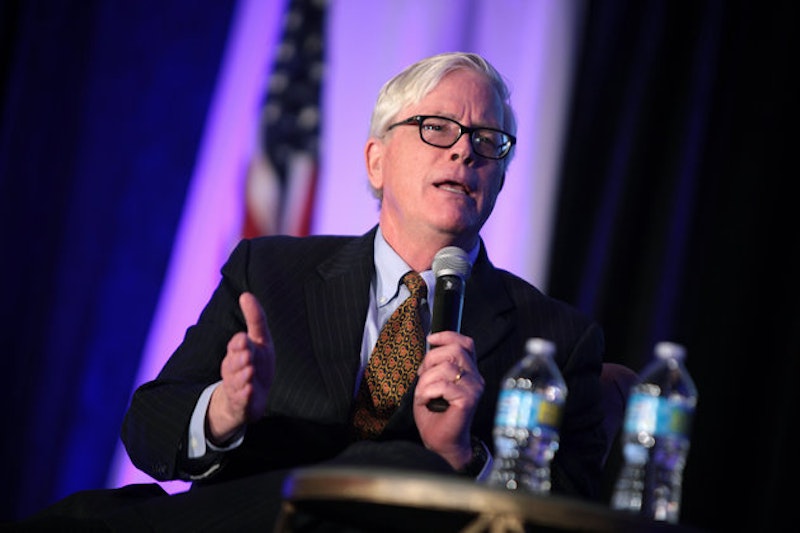 The piece is an example of punditry infected by fantasy baseball. Hewitt imagines Mitt Romney becoming a candidate again but announcing that he’s not actually running for president, that a vote for him is a vote for an open convention. Romney would pick a few states, mainly the ones where he can claim favorite son status, and run no place else. Other warhorses would follow his lead; Senator John Thune, for example, would take South Dakota and maybe some of its neighbors. With enough of these spoiler candidates, none of the regular candidates might get to the convention with a majority.

Then the fun would begin. From Hewitt’s follow-up piece (“Bring On the Brokered Republican Convention,” January 2015): “boring, old, failed Hillary would get more boring and older while the GOP actually attracted interest and energy as intrigue mounted and journalists flooded Northeastern Ohio looking not just for LeBron and Johnny Football, but for real news.” Note: pundits who refer to “LeBron” strike me as dubious.) Hewitt thinks it would be a lark to short-circuit the primary system, and says this could happen by drawing on voter loyalty to the John Thunes of the world. He wildly overestimates this force. Hear him straighten out Romney naysayers: “They are very wrong if they mean Romney has no ability to make the political weather, and having run twice and lost both times doesn’t change that.” Well, it does, really.

Because Romney can’t make the weather in the Republican Party: he’s a discard. To miss this fact is to miss a bigger fact of the past three years: GOP voters no longer believe what their party leaders have to say. Not seeing this, but still wanting to have his story about the open convention, Hewitt pins the scenario to Ted Cruz: the rise of Cruz (“whom the establishment greatly, indeed irrationally fears”) will be the force that spurs Romney to go open convention. Why? Well, the primary schedule is front-loaded with Southern states, Hewitt figures, and there’s Cruz himself, “the firebrand with the extraordinary rhetorical and debating skills.”

Cruz is something, no denying it. But in our world he’s losing the born-again vote to a New Yorker who re-enacts layouts from Penthouse. All right, Hewitt didn’t predict Donald Trump. Who did in 2014? But he could’ve seen that the Republican base was a bit fed up, or very fed up, perhaps terminally so. That’s the key factor of this cycle and it’s been lying there in plain sight, getting more swollen and ugly until the damn thing looks like a 69-year-old billionaire crossed with a zeppelin. I suppose Hewitt glimpsed this factor back in 2014 but couldn’t assimilate it. Hence his fantasy landscape where everything has come unhinged because of Ted Cruz and his gift of gab.

Now the sad reality is looking Hewitt in the face. The pundit responds by crowing about a prediction he didn’t make regarding an event that hasn’t happened. A Fox girl tweets: “@hughhewitt predicted an open convention early on in the election last year when there were more than a dozen candidates. He was right.” Hewitt responds: “Thanks Katie. Yes I did, and yes I am. I will be very humble about that. Yours, NostrHUGHdamus.” Huh.

Open convention? Right now the best we can say is we’ll see. But if that convention doesn’t nominate Trump, Hewitt’s party isn’t in for fun and games that will show up stuffy old Clinton. There will be chaos and possibly blood. Let me put this in Hewitt terms: even Mitt Romney won’t fix things.