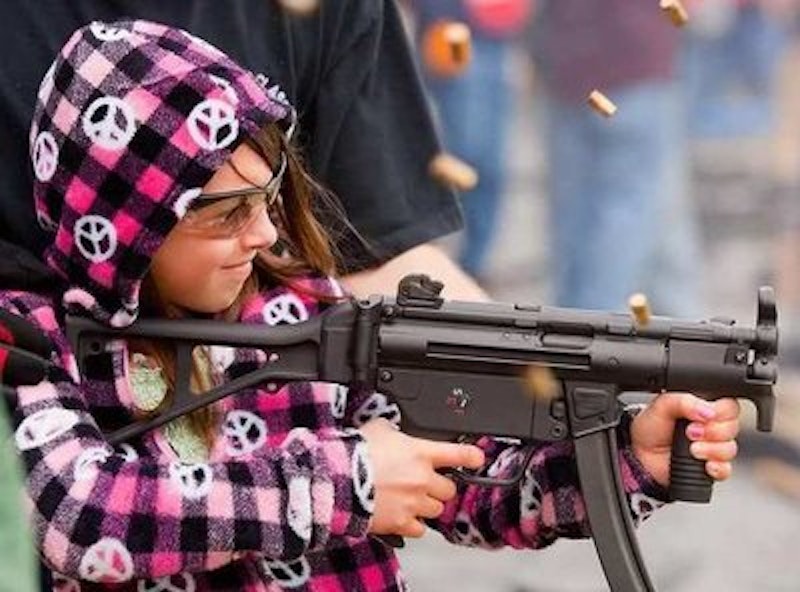 Not unlike the collapse of the tobacco industry, the gun industry has found itself in a similar freefall as household ownership of guns continues to decline. So does participation in shooting sports, particularly hunting. The number of American households that reported having guns in the home, from 1977 to 2014, dropped by 22 percent. And as the primary gun market, made up mostly of white males, continues to age, we begin to see the gun industry scrambling for new markets. First, it was women, but now they have set their sights on America’s children.

According to a report by the Violence Policy Center, an organization that works to stop gun death and injury through research and education, the gun industry, gun lobby and the National Rifle Association are all involved in major efforts intended to entice children as young as six years old to own guns.

This is done primarily by advertising guns that are designed to be “kid-friendly,” using plastic that is lightweight, compact enough to be held by small hands and adorned in bright colors often along with cartoon characters. This makes the weapons attractive to children and seemingly less dangerous. But what gun could possibly be kid-friendly? It’s wrong on so many levels.

The gun industry’s recognition that it relies on winning the hearts of America’s children hasn’t changed over the years. What has changed is the openness with which the industry and the NRA carry out their mission. It’s a disturbing trend to see how powerful a gun a child can handle. The types of firearms built for children have evolved from years ago. Military-style assault rifles are replacing bolt-action rifles. Six-shot revolvers have been traded for semiautomatic pistols. Smith & Wesson offers a smaller version of its AR-15 assault rifle in attractive colors that include Pink Platinum and Purple Platinum, appealing to young shooters.

At the same time, the NRA encourages a culture of fear in young minds, leading them to believe a gun in the home, the school and on their person is necessary for safety. Studies reveal just the opposite. Cases are rare that a gun is used in self-defense during a home invasion. This research is bolstered by a national survey that found a gun in the home was far more likely to be used to threaten a family member, intimate partner or for suicide than self-defense.

In the NRA’s magazine, there’s a kids’ section that’s divided into “Under 8” and “8 and Up.” Both include a section on guns and feature tiny guns intended for the very youngest shooter. In an online version, a video is shown of a seven-year-old girl firing an AR-15 assault rifle. Just last year, a 39-year-old range instructor in Arizona stood over a nine-year-old girl, teaching her how to operate an Uzi, a submachine gun that can fire almost 30 rounds per second. Police say the girl lost control of the gun and the instructor died from a shot in the head. Where were the regulations involving minors at this shooting range?

The frequency of shootings involving children and teenagers is well-documented and now a regular part of the daily news. When it comes to unintentional shootings, the NRA is quick to wave its popular gun safety courses for children and gun safety manuals in their defense. Children are curious and there are now few states that have laws requiring a gun be locked in a home.

With kids as the keys to long-term profitability, the gun lobby and the NRA have made it perfectly clear that no level of tragedy will prevent them from aggressively promoting firearms for children.