Tommy Robinson: the Most Hated Man in the U.K.

The anti-Islamist is a pariah, but critics are shooting blanks. 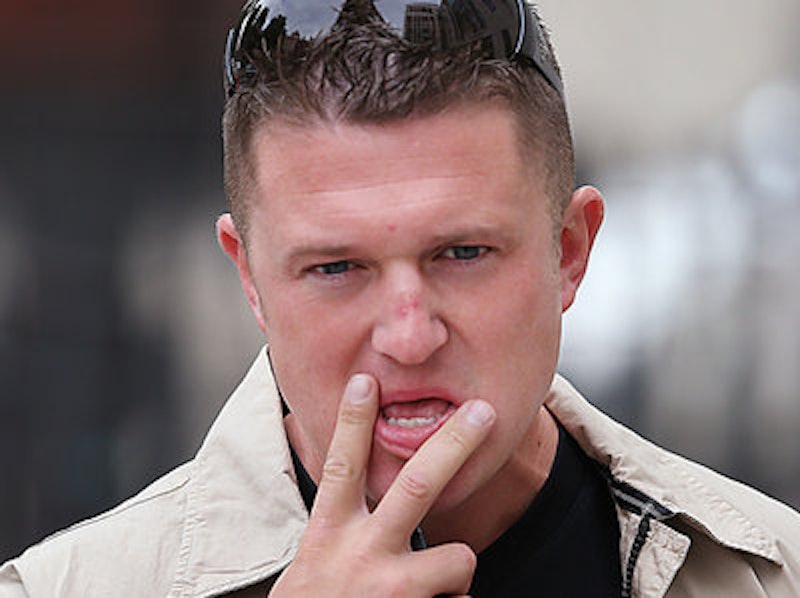 Tommy Robinson might be the most hated man in the U.K., although there's plenty of competition, post-Brexit. It's axiomatic in many circles that the former head of the English Defense League (he stepped down from the EDL in 2013) is a racist and bigot, and to denounce him is a way to affirm one's status as a progressive champion of egalitarianism and multiculturalism.

Robinson (whose real name is Stephen Yaxley-Lennon) doesn’t like the Islamism he sees in British life, and he's outspoken about it, which makes both genteel non-Muslims and Muslims uncomfortable and angry. The former football hooligan frankly critiques the canonical Islam texts, which Islamists take literally, and is falsely accused that he's accusing all Muslims of being extremists.

Robinson founded the EDL with his cousin, Kevin Carroll, in 2009 as a counter-jihad movement to combat the spread of Islamism and Sharia law in the United Kingdom. The group quickly became known for its street protests, some of which turned violent when left-wing groups such as Unite Against Fascism (UAF) showed up to counter-protest. In addition to working people uncomfortable with creeping Islamism, the EDL rank-and-file eventually came to include both heavy-drinking football hooligans and white supremacists.

Concerned about the growing extremism and booze culture within the EDL, Robinson left the group in 2013 for a short stint with anti-extremism think-tank Quilliam. He was then convicted of mortgage fraud and sentenced to 18 months in prison. Upon release, Robinson decided to launch the U.K. branch of the nationalist, anti-Islam group Pegida, which he vows will have none of the booziness or racist chants that marred the EDL’s reputation. He’ll campaign to ban all Muslim immigration to the UK for five years, prevent the building of new mosques, and ban the funding of mosques from abroad.

In his frequent TV appearances, in which he projects an intelligent, charismatic persona, Robinson is often ganged up on. His riveting appearance on a BBC television show ironically called “Free Speech” typifies his plight. The show was set up so that Robinson sits alone in a hostile audience, with a host biased against him and an anti-Robinson celebrity panel onstage. One audience member, who said he's from an Islamic diversity center, said that Robinson should be put on an island and bombed with anthrax. The host didn’t condemn this, and the audience clapped. A woman onstage called him a racist and bigot, repeatedly shaking her head to signal her virtue. “I'm a nice person,” she said, in the only actual “argument” she offered. Robinson must’ve asked her 20 times to name one racist thing he's ever said, and she couldn’t. The host didn't call her out on this.

At the root of Robinson’s problem is that he deals with hard facts, but he's up against people who don't reciprocate. Liberals care only about egalitarianism and harmony. Facts often contradict their goals, so they just ignore them or make charges of bigotry to obscure them. Unlike almost all of his non-Muslims critics, Robinson has actually read the Qur'an, the Hadith, and Mohammed’s biography. His conclusion that the Prophet Mohammed didn't live an admirable life worthy of emulation is considered poor manners among many progressives who lack the knowledge to even discuss the topic intelligently.

I've tried to find one racist thing Tommy Robinson has ever said, but failed. He's stated on national TV that he despises racism. Four Muslims came to his wedding. He left the EDL because of its growing racism, and he’s the one forced to wear a bulletproof vest and who’s taking the beatings from Muslims that have put him in the hospital. A Muslim threatened him with beheading in a street encounter. If he's guilty of anything, it's brutal honesty. The ideology he opposes happens to be connected to a popular religion practiced by people with skin darker than his. These people are successful at portraying themselves as victims to useful idiots who call all critics of Islamism “Islamophobes.”

It's natural that many Muslims don't like Robinson, although he never attacks them individually or claims they all think alike. As for his liberal critics who call him a racist, they look down on his accent but lack his courage and his knowledge of the topic. Robinson says his outspokenness has ruined his wife and mother's lives, but he's compelled to speak out.

Robinson’s checkered past, which some feel discredits his views, actually puts him in a unique position to speak honestly about a taboo topic. He's not a “respectable” member of society, so he's freed from the constraint of political correctness. He believes that the U.K. has opened itself up too much to a dangerous ideology, which should be anyone’s right.