Obama Is a Drone Addict

He’s good at killing, but it's not keeping us safer. 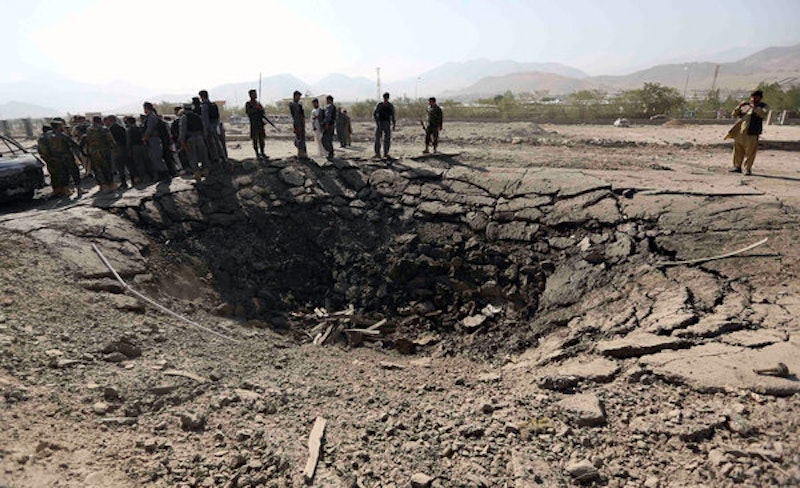 Barack Obama is not much of a Georgetown schmoozer or Congressional backroom backslapper. He’s too aloof to work the social end beyond the bare minimum. He spends most evenings alone in the Treaty Room, his private office in the White House. Perhaps it’s then he checks the secret “kill list,” the inventory of all the individuals marked for assassination by his drone program, and wonders about how many more of them he can take out in his remaining months in office.

It's neither far-fetched nor unfair to speculate about the President's late-night musings about taking lives. The Washington Post quoted him as saying he’s “really good at killing people,” in reference to the numerous drone strikes he’s authorized. That he brags about it is a chilling reminder, especially given all the civilians getting killed by drones. It's hard to imagine a more aloof way to kill specific individuals than with a machine firing Hellfire missiles that's launched from somewhere in Africa and controlled by someone in the Southwestern U.S. who’s getting signals from a relay station in Ramstein, Germany.

The drone has long been Obama's weapon of choice. It's a way to avoid another messy military ground entanglement while still having something tangible to point to in demonstrating his bona fides as fighter of terrorism. Certainly all of the President's kills might look impressive if you're one who believes fighting terrorist organizations is mostly a matter of killing their members, especially the leaders.

One obstacle to drone killings has been President Gerald Ford’s 1976 executive order banning assassination by U.S. personnel, but Congress hasn't specifically defined assassination, so they're just called “targeted killings.” If you're a drone target in some remote, undeclared war zone, you'll never know that you've been summarily sentenced to death without notice. You may be on the list because an analyst has picked up a pattern in your phone calls.

As reported in The Assassination Complex, an exposé of the drone program by Jeremy Scahill and the staff of The Intercept, the NSA often identifies drone targets by analyzing a phone’s SIM card metadata only, with no actual content being monitored. In other words, you're calling the wrong people. Drone missiles are aimed at a particular phone, so if a suspect’s mother is carrying the phone, she becomes the target. It's all very impersonal.

At the heart of the problem, Scahill explains, is that in undeclared war zones, the military is overly reliant on signals intelligence, or SIGINT, to place people on “kill lists.” Much of this information is provided by foreign partners, and comes from phone metadata. Official documents that The Intercept has received from an anonymous whistleblower inside the U.S. government admit that the quality or such intel is “poor” and “limited,” while also revealing that a special one-year operation in Afghanistan killed more than 200 civilians.

While the White House claims that drones will be used only against people who pose an imminent threat to Americans, the whistleblower’s documents do not support this claim. The Intercept’s source told them that the masterminds of the global assassination operation give no thought to the moral implications of their actions. He believes that, with a barely functioning Congress and an executive branch that's been grabbing power over the past two presidencies, such lack of self-reflection has great potential for abuse.

Washington's 14-year drone program has killed many people, some of them imminent threats to the U.S., but the reliance on assassination rather than capture kills too many civilians and eliminates the ability to extract valuable information from terror suspects. As Scahill notes in his book, drone assassination is an addiction.

There’s no hard evidence that this addiction is making the U.S. a safer nation. President Obama doesn't understand the actual enemy he's fighting. In fact, he can't even get himself to say “Islamist extremism,” nor will you hear him speak of “global jihadism.” A percentage of Muslims dreams of imposing Islam and Sharia law on the world. The ones who are actually working to achieve this goal are whom Obama is assassinating with Hellfire missiles, but what he doesn't get is that he can't win by cutting off the head of the snake, because he's dealing with a Hydra, not a snake, here.

The U.S. government claimed it has killed between 64 and 116 “non-combatants” in 473 counter-terrorism strikes in Pakistan, Yemen, Somalia and Libya between January 2009 and the end of 2015, but there’s no reason to believe this figure. Indeed, the whistleblower's government documents reveal that 200 non-combatants were killed in just one year in one country. The Bureau of Investigative Journalism, using reports by local and international journalists, NGO investigators, leaked government documents, court papers and the results of field investigations, estimated civilian casualties at 380-801. While the President lectures Americans about our gun problems, it's looking like his drone program that makes him so good at killing is taking more lives than our mass shootings. He's trying to fight an idea he can't even put into words.