I Was Right About Bernie Staying In 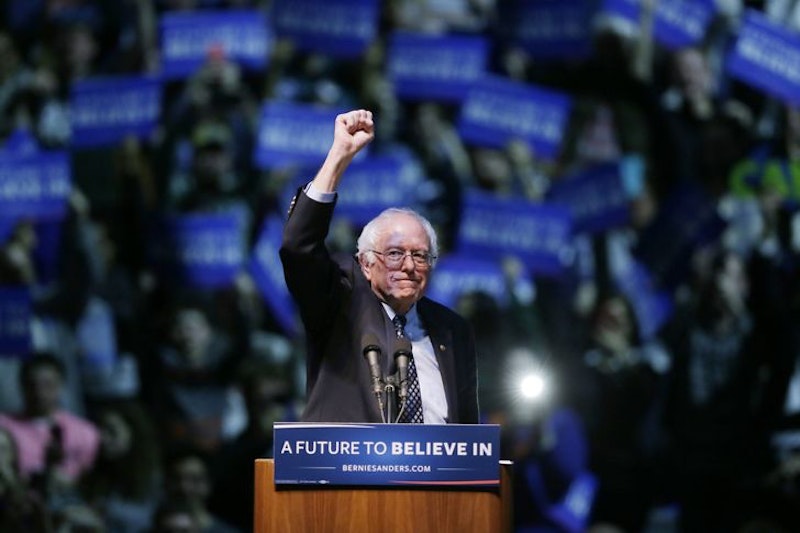 Here’s something I said about Bernie Sanders: “I don’t think soldiering on hurts Bernie’s cause. If his supporters keep voting against Hillary, that’s a sign they may not turn out for her in November. Which gives her a powerful reason to tell those voters what they want to hear, since she’s going to need every vote the Dems have.” Boy, was that a good call. I said it four and a half months ago, and now we have this headline at Vox: “The Democratic Party Has Moved Left After Bernie Sanders’ Run. The Platform Is Proof.” Bernie stayed in the race and his issues did just fine.

My call wasn’t perfect, unfortunately. I didn’t say he’d start winning primaries again. I just figured that if left-wing voters played hard to get, Hillary would be forced to come looking for them. What I got right: the left in the Democratic Party no longer has to apologize for itself. It used to be a vestigial organ, now it’s a force. As Vox tells us, this fact shows in the party platform.

“We have produced by far the most progressive platform that this party has seen in multiple generations,” says Governor Dan Malloy of Connecticut, a Hillary supporter who co-chaired the platform committee. Warren Gunnel, Bernie’s policy director, appears to agree. “I think if you read the platform right now, you will understand that the political revolution is alive and kicking,” he says. David Weigel at The Washington Post, takes up the song: “The Democratic Party shifted further to the left in one election than perhaps since 1972, embracing once-unthinkable stances on carbon pricing, police reform, abortion rights, the minimum wage and the war on drugs.”

One reads that the Bernie campaign isn’t the entire reason for the platform. “The Obama era saw a wipeout of the party's conservative wing, with Democrats losing almost every state legislature and almost every statewide office in the South and Appalachia,” Weigel says. “That meant that the remaining progressives faced no serious ideological resistance.” There’s also my “legions of the burnt” theory. Capitalism performed its ’08 bitch slap on the white middle class, not just the lower-downs. The middle class hasn’t forgotten, meaning (I expect) that more Americans are more left-wing than at any time since the New Deal. Of course, politicians and political observers have trouble processing this fact. Here’s where Sanders comes in, because he just collected 13 million votes to help them remember.

John Cassidy puts my point into New Yorker language. Hillary’s move to the left, he says, “reflects a change in sentiment in the Democratic Party, and American society as a whole, in response to rising inequality, disappointed expectations, and the financial crisis of 2008 and 2009. Where Sanders does deserve credit is for recognizing this historic shift, seizing on it, and pointing it in directions that couldn’t have been predicted even a year ago.”

Early in 2014 I thought about a Jeb vs. Hillary race and figured something had to give. After all we’d been through, the public wasn’t going to take Mr. Establishment Rerun vs. Ms. Establishment Rerun, not without a rupture. I figured Hil’s best chance was to sign up Elizabeth Warren and start touting the senator’s agenda as her own; that way people would have something to vote for. No, I didn’t write this down. I wish I had, because then I’d be a great pundit and not just a good one. But bear these principles in mind if you want to know how American politics is going to go: people are way more angry about capitalism than politicians think, and American democracy is a lot more resilient than it looks. In the meantime, gaze on my prediction about Bernie. He stayed in and it's a good thing too.