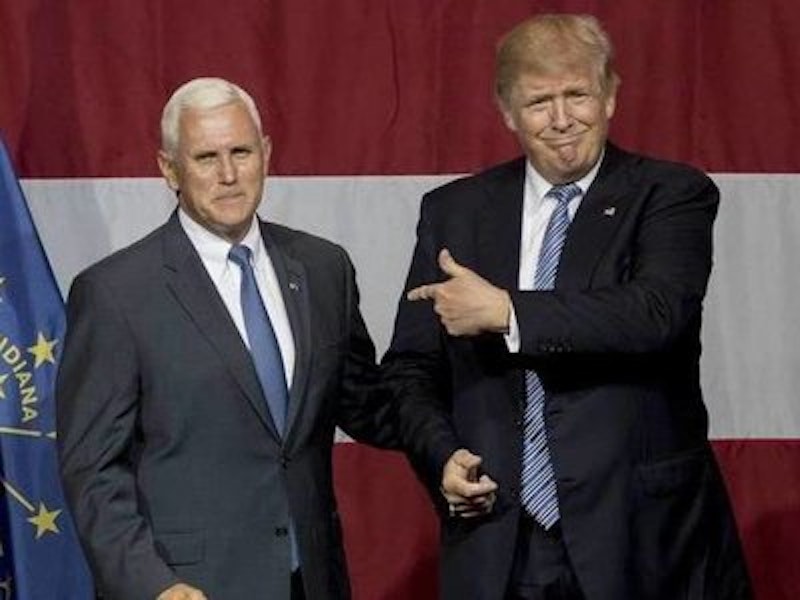 National political conventions are the beginning of the end of the electoral process. They’re a window on the organizational conduct of the major political parties and an insightful interview with the candidates by watching who they surround themselves with, beginning with the vice presidential picks.

As a preliminary order of business and an awkward hesitation, Donald Trump chose as his running-mate Gov. Mike Pence, of Indiana, a righteous conservative and former Congressman, apparently as a counterweight to his own lack of government credentials as well as a unifying force with the party’s right flank as well as a soothing contrast to Trump’s bombast.

Pence’s name had been floated for at least 24 hours, but Trump, as executive producer of his own presidential extravaganza, appeared to lose control or, as reported, had second thoughts about Pence. The vice presidential foreplay was edged off the news by the carnage in Nice, France and again by the attempted military coup in Turkey. The formal announcement was revived via Twitter and eventually given delayed public lift after embarrassing, then rescuing Pence.

The conventions, Republicans this week in Cleveland and Democrats next week in Philadelphia, say who and what the parties are and where they want to take the country. For Republicans, the roadmap is familiar terrain, more in tune with the party’s right-wing base than the broad American electorate. And for Democrats, the signposts are newly expanded, but well within the party’s wish list, to include many of the social directions thrust upon Hillary Clinton by Bernie Sanders as the negotiated condition of his belated endorsement.

Begin with the demographic make-up of the delegates in the convention halls. Republicans are about 98 percent white and two percent minority, a contrast to GOP conventions well into the 60s when the party was still liberal and older blacks clung to the party of Lincoln. But the party failed to keep pace with changing times and populations and today it largely represents white anger and frustration. The Democrats are America in miniature, a polyglot assembly that recognizes at least 10 different minority groups that must be represented to meet quotas by party decree. This is about as undemocratic as Democrats can get but the mandatory system accommodates what the nation has become. The difference in party representation is reflected in the convention halls as well as in their platforms.

The contrast is remarkable. For if anything, the Republicans, drawing on past platforms for a start, have stiffened their stance on social issues, even rejecting the softer positions on gay rights and other LGBT issues such as transgender bathrooms of their own presidential nominee. The Democrats appear comfortable with those matters as settled business. They are instead focusing on economic issues that are underlying much of the nation’s social division.

Nudged by Sanders, Clinton and her negotiators have agreed to include in the Democratic platform a call for free college tuition, expanded access to health care, a $15 minimum wage and a plan to combat global climate change. Sanders has said he will fight for even more dramatic change throughout the party’s convention. Sanders risks wearing out his welcome if he continues his rant. The Republican platform is a stern Calvinistic document. It is almost elegiac in tone and a nostalgic lament for a long-gone America that probably will never exist again. It adopts the Trumpian signature anti-immigration issue to partition off Mexico—“the entirety of the southern border and must be sufficient to stop both vehicular and pedestrian traffic.”

The GOP platform contains an anti-abortion plank, a call for religious freedom laws (code for discrimination against certain groups), support for traditional marriage, anti-gun control positions, opposition to women in combat zones, support for state laws restricting bathroom use by transgenders and “special scrutiny” of people from terror-sponsoring countries. Trump, according to most reports, exhibited little attention or interference in the preparation of the platform. The GOP platform has moved measurably to the right of past documents.

The consolation is that platforms are quickly forgotten soon after the conventions adjourn for another four years. Except, perhaps, in the case of the Democrats where Sanders has exhibited a stubborn determination to have his way. Sanders has a soap box in the Senate and a large constituency to amplify his demands. So if Clinton becomes president, expect some enforced follow-through. Among Republicans, their platform’s stated views prevail in Congress and contribute to procedural delays and deadlock.

Conventions, as Trump has been insisting, are 90 percent show business and 10 percent hot air. But the GOP meeting may fall flat as theater. The most dramatic promise had been the attempt to remove Trump as the nominee. Yet even that effort collapsed of its own dead weight, if not a sense of inevitability. The anti-Trump crowd arrived with a cause but no alternative. And, for sheer irony, everyone standing by, just in case, to assume the leading role was, in Trump’s literal word, a “loser.” But the rejection of the anti-Trump forces demonstrates that Trump delegates and GOP officials are firmly in charge of the convention’s procedural machinery. The dump-Trump delegates still may have their camera-ready moment of agitation on the convention floor.

As for superstars, The Republican convention can claim few, if any, to match the galaxy of Capital Letter names booked for the Democrats’ gathering. The Republican speakers’ list, in fact, may be more noteworthy for who’s not there than who is. At the top of the showcase, of course, is Trump’s family—his wife Melania, daughters Ivanka and Tiffany and sons Donald and Eric. This approach is meant to reveal the softer side of Trump much in the same way Ann Romney, in a memorable speech, tried to humanize her husband, Mitt, in 2012.

But according to advance notices, nothing or no one will overshadow the star of the Cleveland show, Donald Trump. Many Republican notables, including its two living ex-presidents, George H.W. Bush and George W. Bush, as well as its candidate of four years ago, Mitt Romney, have chosen to pass up the Cleveland gathering, as has the host-state’s governor, John Kasich. Thus, the Republicans are bragging about Tim Tebow, the evangelical right’s favorite football player (who doesn’t have a team to call his own.) Then there is the usual assortment of elected officials—Sen. Ted Cruz, of Texas; Gov. Scott Walker, of Wisconsin; Gov. Chris Christie, of New Jersey; and former House Speaker Newt Gingrich. The last two were finalists for the vice presidential slot. And, of course, the master of ceremonies for the entire event is House Speaker Paul Ryan, of Wisconsin, a flabby Trump backer who’s becoming increasingly unpopular within the party.

Compare that with the Democrats’ A-list of speakers—President Barack Obama; First Lady Michelle Obama; former President Bill Clinton; Vice President Joe Biden; Sen. Elizabeth Warren, of Massachusetts; and Sen. Bernie Sanders. Add to the list an impressive play bill of entertainers from Hollywood and Broadway to round out the marquee in Philadelphia.

But all of the fireworks may not be in the brotherly city of cheesesteaks and soft pretzels. Ohio is an open-carry state where people with permits can mingle in crowds while carrying a rifle or other long gun. But the 1.7 square mile area of downtown Cleveland designated for protests and other events has been declared protected space. The Secret Service has banned tennis balls, canned goods, water pistols and metal-tipped umbrellas, but AK-47’s are welcome.