You Are Your Own Trash Can

The absence of government in India and why the Tea Partiers are silly. 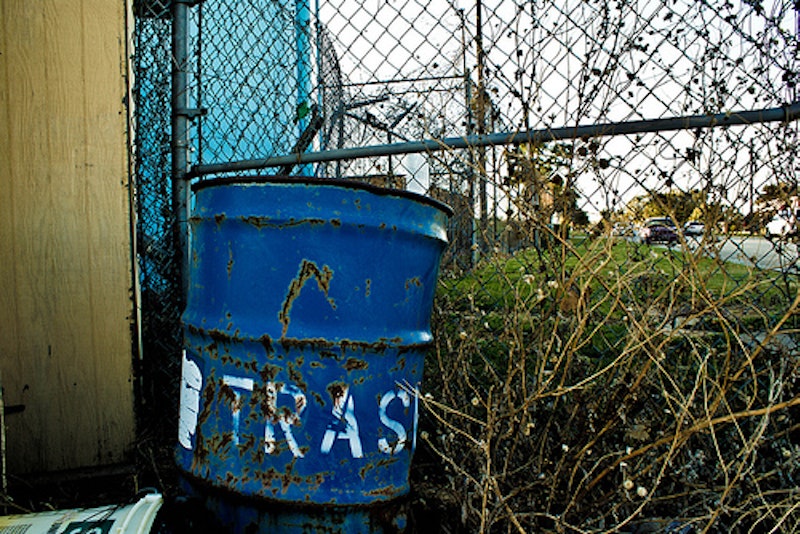 I have so much space in my pants pockets. That must sound silly, but it is one of the underrated perks about being back in America. For nearly six months, my back pocket was off-limits—an anti-pickpocket precaution that most travelers endure when they leave the friendly confines of these United States. In addition to my bulging wallet—stuffed to the brim with the small bills necessary to do anything in India (big bills and credit cards might as well be Deutschemarks)—I often had some combination of my passport, chewing gum, pens and pencils, my ludicrous keys (Indian keys are fantastic: they’re several inches long and look like they jumped out of a Jane Austen novel), and my thick cell phone.

Oh, and trash. As I’ve mentioned before, there are virtually no public trash receptacles outside of the major tourist sites. The granola bar wrapper from an on-the-go breakfast would sit in my pocket, gently scratching my thigh for the 35-minute walk to the office, where I would finally have a place to throw it out. My pockets were always filled with napkins and tissues, in preparation for the inevitable pollution-induced black runny nose.

Much of my direct interaction with Indian government or regulation went quite poorly—horrifying postal rules, bizarre restrictions on foreign credit card use, and wretched lines at anything government-run—so I understand some fears and complaints about government. But if you’re a libertarian, a Tea Partier or just someone who really hates the IRS, then I suggest you take a trip to Delhi and look around a bit. Yeah, sending packages sucks, but that’s not the first thing you notice: it’s the thick black smog. Then you notice the trash everywhere. Then the absolutely bonkers, unruly traffic. Then the stray dogs. Finally, you notice everyone drinking bottled water because the tap water is poison.

For all those people who detest government, you need to go see what happens in government’s absence. India’s people are some of the most hard-working, dynamic people I’ve ever encountered. Their resourcefulness and ability to skate the outline of the dual-headed hydra of excessive regulation and regulatory absence are incredible. Do not get confused, though, because India’s recent successes have come in spite of this absence, not because of it. Almost every major analyst—from Fareed Zakaria to Nandan Nilekani to the finance minister of Britain—puts India’s lacking infrastructure as its biggest hindrance to growth. The private sector can build nice neighborhoods; it can even put nice paved roads in those neighborhoods, but it can’t connect Hyderabad, Mumbai and Delhi with a super highway.

But you know what: fuck growth. Fuck GDP. These are things we obsess over. They are important. In the Indian context, government-supported infrastructure is a necessity for the economic growth that over the course of time I believe will improve people’s lives. Beyond some abstract figure, though, government absence blatantly messes with you every day. The private sector can’t cover the open-air sewage rivers. It hasn’t been able to teach the roughly 350-million illiterate citizens how to read. The stray dogs own the cities at night, no matter what neighborhood you live in. The absence of traffic cops and traffic signs makes India’s roads among the deadliest in the world. An increase in the number of water purifiers sold hasn’t done anything to make the water drinkable.

And there are no trashcans outside. Oh, sure, most restaurants and offices have them. Left up to their own devices, people will put a trashcan in their home or business. But three in my office don’t make up for zero on the street. And the thick smog outside only gets thicker as more and more cars enter the road and an absence of comprehensive emissions regulation continues.

We don’t want to swap America’s government with India, but India’s terrifyingly large government is the product of difficult-to-crack corruption, nepotism and a massive, insular bureaucracy left behind by the British. When India’s government is transparent and under scrutiny it can definitely succeed, hence the incredibly swift and thorough post-26/11 airport security that puts our awful, bloated security system to shame. What I’d really like to hear from Tea Partiers and their ilk isn’t a declaration against government, but a declaration against bad government and the policies that can lead there. Well, Tea Party friends, if you really want to know what it would be like without government, you can start by putting trash in your pocket.