Is it possible to bypass politics in the nomination process? 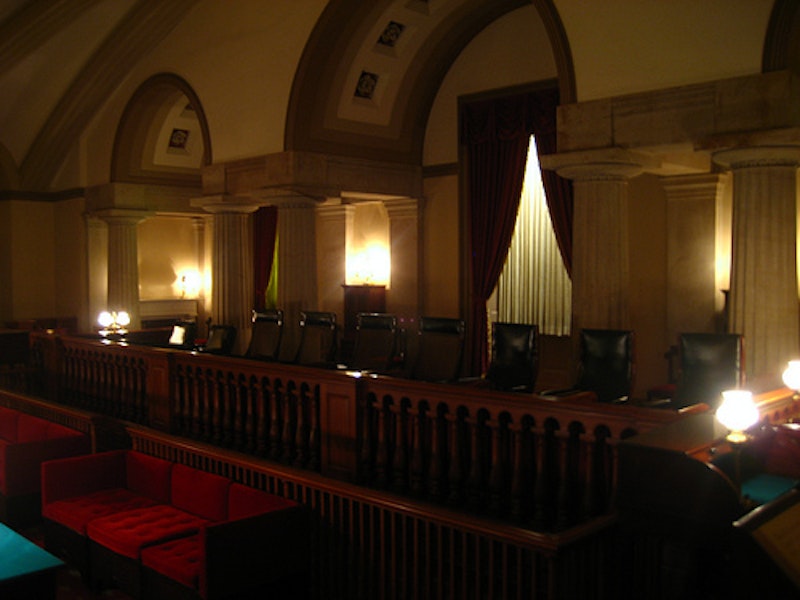 Supreme Court Justice John Paul Stevens recently announced his retirement from the bench and already we see lines in the sand drawn between Republicans and Democrats over his replacement. Republicans, abhorring “judicial activism” and justices with “liberal ideologies,” have vowed to oppose pretty much anyone President Obama nominates. Democrats, pointing to the recent Supreme Court campaign finance ruling, counter that the conservative John Roberts-led court is every bit an activist judiciary, constructing law contrary to Congressional mandates and years of the court’s own established precedents. Possible candidates, their histories and philosophies, their backgrounds and politics are being scrutinized in intimate detail, and most are being found unacceptable to one side or the other. A battle over the nomination has begun, although President Obama has yet to name a nominee, and it promises to be a long and arduous one.

At the heart of the argument are the parties’ perceptions of what should be the Supreme Court’s role in our society. Some would argue that the Court should practice the traditionally conservative concept of judicial restraint by not making policy, the prerogative of federal and state legislatures, and by only overturning duly enacted statutes when they clearly conflict with the Constitution. Others believe that the Court should be composed of judicial activists, judges who recognize that the Constitution is a living, breathing instrument, to be construed and interpreted as fits the needs of a changing, dynamic society.

What both sides need to recognize, for it would go a long way toward resolving conflict over potential candidates, is that the Court’s history can be viewed as interchanging periods of liberal or conservative activism. Arguably the most important Chief Justice, John Marshall, in transforming the Supreme Court from a minor federal judiciary into the final arbiter of the Constitution, was the quintessential judicial activist. With his landmark opinion in Marbury v. Madison, Marshall upheld state law, but forever changed the face of the Court through his development of the doctrine of judicial review, a power not explicitly stated in the Constitution, but which gives judges the power to review the laws or actions of state and federal governments to insure their constitutionality. A confirmed federalist, Marshall’s subsequent decisions went on to shape the balance of power between state and federal governments. Through an expansive reading of the Constitution’s Article 1 enumerated powers clause, Marshall helped establish the supremacy of federal law over state law.

A highpoint for conservative judicial activism occurred during the 1930s with the Court’s rulings on New Deal legislation. Elected as president at a time when the country was at social and economic ebb, Democratic Franklin Delano Roosevelt put together a series of laws designed to end the Great Depression by restoring the economy. In a show of unprecedented bipartisanship, Congress passed the laws in a record 100 days. The Republican Supreme Court Justices, however, had different ideas on the legitimacy of Roosevelt’s economic programs. Contrary to the express mandate of the legislative and executive branches, the Justices struck down over 29 pieces of legislation, including six major acts, like the Agricultural Adjustment Act (1933), the National Industrial Recovery Act (1933) and the Bituminous Coal Conservation Act (1935). The Supreme Court halted its usurpation of the executive and legislative will only after Roosevelt attempts to “pack” the court with justices who would favor his “New Deal” ended in failure.

The heyday for liberal judicial activism was the 1960s, when Chief Justice Earl Warren presided over the Supreme Court (Dwight Eisenhower once said that appointing Warren, a Republican governor from California, was one of the worst mistakes he ever made). Along with Associate Justices William J. Brennan, William O. Douglas, Hugo Black and John Marshall Harlan, II, Warren made dramatic changes in the areas of civil rights and federal and judicial power. The Warren Court’s renovation of criminal law and procedure was particularly notable. With decisions like Gideon v. Wainright, establishing a defendant’s right to counsel, and Miranda v. Arizona, establishing the proper procedure for police interrogations, the Court greatly impacted the country’s criminal justice system in a way that still reverberates today.

What the Supreme Court’s activist history teaches us is that the Justices who are raised to the highest court in the land do not work in a vacuum. The men and women who populate the court come with their own perceptions and viewpoints, strengths and weaknesses, and philosophies and ideologies. Along with law and reason, the decisions they render will always have a bit of the justices themselves in them. Sometimes, as in Dred Scott v. Sanford, where the Court ruled people of African descent and their descendants were not protected by the Constitution, the Justices’ holdings seem contrary to what society considers is fair and just. At other times, as in Brown v. Board of Education, where they held that school desegregation was unconstitutional, the Court reaches a conclusion that transforms society and its institutions in a way that will resound forever.

Accepting that those who would become justices have merits and flaws like most human beings may make the task of choosing a candidate for the soon to be vacant position seem to be a daunting one, but it is not impossible. The President should bypass partisan politics and not choose a candidate who favors conservative or liberal ideologies, but an independent thinker, a man or woman with a passion for the law and a willingness to judge within the confines of the Constitution but also in ways that is best for the country. The President should choose someone with intellect and integrity, and experience not only with law, but also with life. The next Justice should be someone who can speak for ordinary Americans, someone like the soon-to-be-retired Stevens.