A River of Shit

And other public health concerns noticed in India. 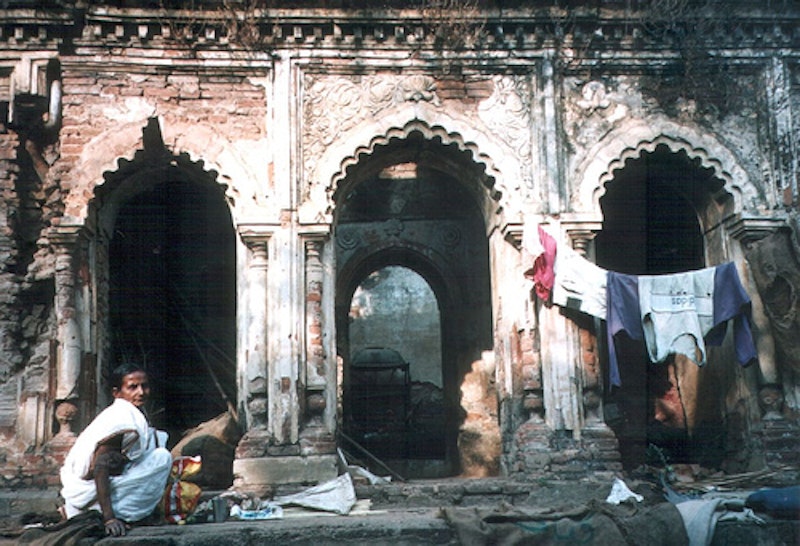 You never get used to the smell of shit.

In India I’ve encountered some of the best and worst scents of my life and have gotten used to most of them. I no longer detect the scent of stale firecrackers that mars the pollution-tainted air, the harsh, ubiquitous incense is now a dull afterthought, and I’m growing immune to the searing aroma of burning garbage. But the smell of human fecal matter still stings my nostrils.

Unfortunately, this isn’t due to lack of exposure. An open-air sewage drain runs right through the middle of my ritzy neighborhood—literally a river of shit. Since I arrived in Delhi, the city has been hard at work covering the river at an impressive pace, though the smell remains. There doesn’t seem to be any plan to extend the cover outside the confines of this fortified neighborhood, so I still get to see Shit River on the way to work.

Of course, that bend of the Shit River doesn’t run through a well-to-do part of town. Although just across the highway from two upper-middle-class neighborhoods, the banks of the Shit River are lined with the tin, plastic and canvas roofs of the slums. The now-being-covered Shit River has wide streets, big fences, and probably 30 yards of grass and foliage separating it from the houses in my neighborhood. Across the street, people are living right next to it. But the insects festering in the largely still shit water aren’t restricted by gates and highways—they’re probably the same ones that sneak into my apartment at night.

Meanwhile, the Indian economy is thriving and a noticeable swagger has taken hold of the on-air business news commentators and executives. There are more interviews with businessmen from around the world, discussing the potential of the Indian market. And when the conversation inevitably turns to the potential road blocks in Indian development, there seems to be a clear consensus among foreigners and locals alike about the biggest issue: infrastructure. Transparency usually comes in second, but infrastructure is always the buzzword on the tips of the lips. You could argue that the Shit River is an infrastructure issue, and you’d be technically right.

But really it’s a public health issue. It’s the fact that every night before bed I wash my toothbrush exclusively with bottled water and—despite the fact that I take malaria pills and have plug-in mosquito repellent—cover myself completely with bug spray, probably to the detriment of my immediate health and to the environment. I do this because of the scariest moment I’ve had in India: finding two little bug bites on my ankle the first week I was here. I stared at those two bites, freaking out, praying that I didn’t have the lifelong curse of malaria or some other disease. I called my medical student girlfriend in a state of near-hyperventilation, mistaking my jet lag for what had to be a burgeoning case of malaria.

I was fine. That red-alert response, though, may not have been a total overreaction. I have an American acquaintance who’s been fighting off both typhoid fever and dengue fever for the most of the three months she’s been here—diseases I didn’t even know still existed before I got vaccinated.

Dengue fever, however, has no vaccine and also just happens to thrive in climates like India’s. But the health issues lay much deeper than some fatalism ascribed to mosquitoes. Frankly, the government hasn’t vaccinations as a public health concern. India is almost singlehandedly keeping the measles alive—accounting for roughly 75 percent of all measles in the world. The same report blamed the ghastly results on “delayed implementation of large-scale vaccination campaigns in India.”

More than just vaccinations, though, the government needs to address public health from a prevention standpoint. An editorial like this one from The Hindu newspaper could just as easily be printed in an American newspaper—decrying the spread of treatment over prevention and the need for government to readjust the medical profession’s incentives. However, the two public health situations are virtually incomparable. There is plenty of room for debate over private and public U.S. healthcare but, then again, the U.S. government provides disease-free water, something that would probably save a massive number of lives and vastly reduce the spread of disease in India.

Yet, the clamor for clean water appears a bit subdued. Newspapers rarely—if ever—mention water outside of the agricultural context. The offhanded remark in the above Hindu editorial is the first mention I’ve noticed. Unfortunately, the spread of water purifiers has taken the bite out of the push for urgency. They are so far-reaching that when you sit down at a restaurant, you are almost always greeted with free glasses of fresh, drinkable water—you don’t even get free tap water in Europe.

While working on providing clean water the government can try to implement much cheaper public health awareness campaigns. This is a bit of a delicate subject, but the Shit River isn’t exactly the only excrement I have to encounter on a daily basis. There is a habit of relieving yourself, well, kind of wherever. I see more people urinating on sidewalks than walking on them. Indeed, when walking anywhere, one has to balance the likelihood of getting hit by a car in the street with having to skip over stale urine streaks/puddles every 30 feet on the sidewalks. The ubiquitous urine and feces on the sidewalks, next to the roads, and in the parks—probably entering the water supply—are enormous factors (http://en.wikipedia.org/wiki/Typhoid_fever#Transmission) in the spread of diseases like typhoid.

I hate to suggest that the Indian government start imposing vast regulations —the wounds of the License Raj still seem so fresh—but there needs to be some sort of public health inspection ensuring health code standards. Street vendors are hard to regulate—maybe they can be addressed with public awareness campaigns—but at least inspect restaurants. It’s nerve-wracking trying any new restaurant without a reputation. And while it’s often a good predictor, a reputation, is not foolproof.

The economic might of a nation begins first and foremost with its people. Foreign businessmen may hate the traffic, but I guarantee you malaria is a bigger concern for the country as a whole. This is a diverse and welcoming place, its history long and fascinating, the people friendly, quick to start a conversation with you and to welcome you into their lives. The food is amazing. I am getting so much out of being here—things I’ll carry with me for a lifetime. I’m just really scared that sickness will be one of them.