A horrifying close call highlights a serious problem in India. 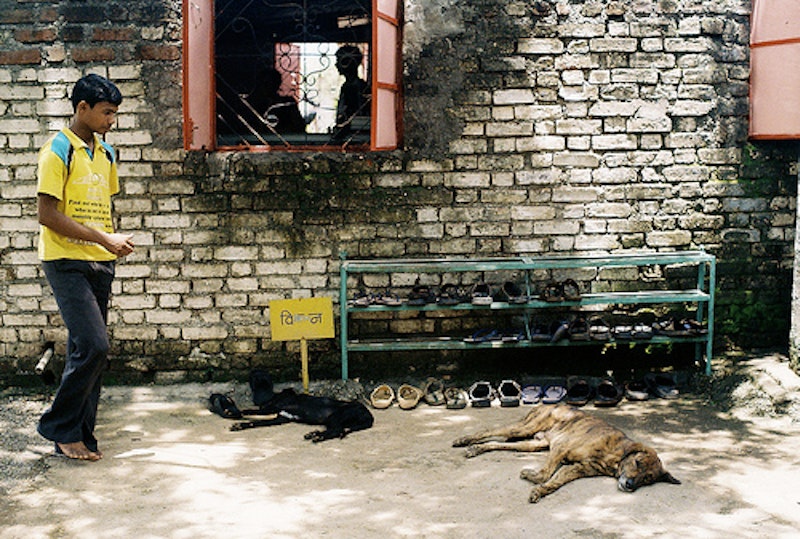 I ran as hard as possible. Instead of turning my mind blank, the adrenaline from the flight response cut through the chatter, giving me a clear, focused internal voice. I ripped my headphones off and honed in on the sounds of the steps behind me. They were sprinting, too, but I was faster—there was time to make a move. The scenario was unfolding like a computer model in my head, working through possible outcomes and probabilities. The gate to my apartment building was padlocked—there was no way I had time to take out my keys, jiggle the finicky lock, remove the chain, open the gate and swing the door behind me. The fence at one end of my street was locked. My pursuers were coming full speed from the other end.

Where were the security guards with bow staffs that I’d seen napping just 30 minutes ago? “Fuck,” I yelled out, hoping to stir any dozing guards, but their lawn chairs and guard boxes were empty as I throttled past. I was nearing my apartment, decision-time looming. I’d have to jump the gate. Then, two houses before mine, there it was—salvation. One of my neighbors had left their driveway gate open. I ducked inside, grabbing one side of the gate, lunging for the other. I heard the steps getting uncomfortably close, still at full pace. I slammed the two sides of the gate together in the nick of time—the leader ran nose-first into the just-closed gate.

Gasping for breath, assessing my situation, I looked down into its red, rabid eyes. It turned and sauntered off. The other, though, the loud one, kept barking—barking like I’ve never heard before. Manic and unyielding, the skeletal dog barked continuously for over10 minutes. Like a bad movie about the Old Neighborhood, lights went on in the houses, as people were woken from their slumber. A window opened above me, and I heard a voice. Then I realized … it was talking to me, asking me in Hindi why I was in their driveway. Too frantic and panicked to translate, I pointed to the dog and babbled out in English, “I’m sorry. I’m so sorry. They chased me. The dogs. I didn’t want them to bite me. Your gate was open. I live two doors down. I didn’t know what to do. What should I do?” Our mini-conversation must have bored the dog, as he stopped barking and—luckily—headed back up the street. I snuck out of the driveway and walked at a sturdy pace to my building – not quite feeling at ease until well after my apartment door was bolted behind me.

Upon arriving in India, my first impressions came in this order: smog like Los Angeles, people everywhere, the buildings look awesome, everything is super colorful and “Ah, shit, that is a lot of stray dogs.” You sort of get used to it, as 99 percent of the dogs are docile and rarely interact with humans. But then you see the statistics and that anxious edge never really subsides. India accounts for roughly 70 percent of all rabies deaths in the world. About three million people get bitten every year, with 30,000 dying from rabies.

This most recent quasi-life-threatening (or at least scary-trip-to-the ER-threatening) incident made me realize the frequency with which these stray dogs affect my life. I often take evening walks around my neighborhood—headphones on, pondering life in this wild city, with the brilliant parks (and kids playing badminton until deep into the evening), the jungle trees and vines.

Yet, these walks are tempered by the ominous presence of dogs. Coming across one is like stepping on someone’s shoes at the bar—you have to read the situation, understand who is in the position of power, who needs to back off, and who is just sick and crazy. You realize that dogs are on a lower rung than humans, and often a menacing stare, a low grumble, and a clenched fist sends dogs hiding behind trash bags. Showing any fear draws them closer; you have to trick yourself into ignoring them, walking tall, reminding them that you’re bigger.

But sometimes you need to know when to stand down. A ragged female dog, breasts sagging with milk, is one you want to avoid; you don’t want to threaten its puppies. And then there’s the rabid dog. This one is barking at nothing, and when it barks at you, it doesn’t quite look you in the eye, as if it’s barking at something 12 feet to your left. They act erratically, preferring to lounge in the middle of the street instead of off to the side where most of the dogs reside. The strays with the faded, dusty collars are the most nerve-wracking as they’re far too comfortable with human contact (as well as being the most erratic), likely abandoned after being bitten or maybe for behavioral reasons or maybe they were just the type of dog that runs away.

As the above-linked article points out, the rabies vaccine is expensive, the side effects can be dangerous and it doesn’t even combat the source of the disease. The scale of the problem is out of control. If pet owners took better care of their dogs and ensured their spaying or neutering, it would certainly help, but it wouldn’t come close to tackling the issue. The government needs figure out something—and fast. Maybe it can farm this out to the nonprofit sector, providing funds or tax breaks for animal shelters, making a mandate for safer streets clear. But—unpalatable as it sounds—it may just come down to hiring a whole lot of dogcatchers.

I love dogs, which makes the whole thing harder to handle. I still marvel at the puppies that live a block from my office, smiling as I watch them play, relieved to see their mother nearby bringing them trash to eat, looking healthy albeit a little skinny. But unfortunately those puppies in all likelihood will grow into the ones I ran into: three dogs spread across the middle of the road, blocking the route to my street.