And if that's what it takes, okay. 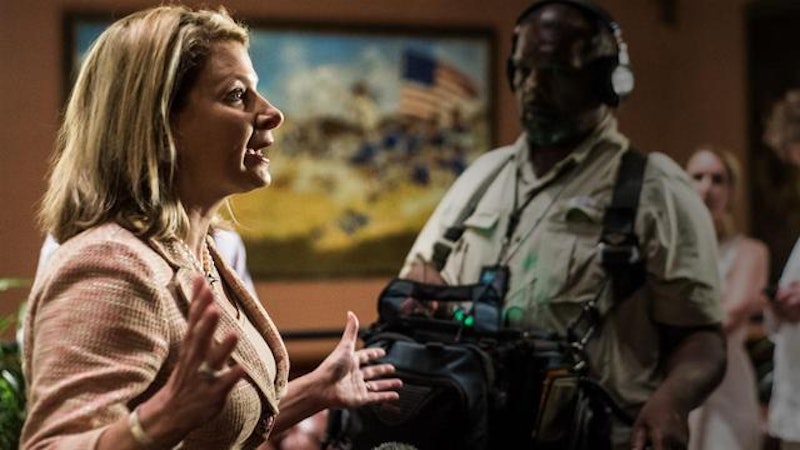 “No woman wants to cry,” Rep. Jenny Horne told a reporter. “I didn’t want to cry, but I couldn’t help it.” Her four-minute speech before her colleagues has been described as fiery, emotional, and pivotal. The second adjective is true for sure; the others are debatable. At any rate, what she said will be remembered.

Rep. Horne wanted South Carolina's House of Representatives to cut the crap and vote for the Stars and Bars to come down. About five hours after she spoke, the crap was finally cut and the vote held. It was a landslide for sending the flag where President Obama says it ought to go—a museum, in this case the city of Columbia's Confederate Relic Room and Military Museum.

Getting to the vote meant wading through almost 60 amendments. If any of them had been approved, weeks could’ve gone by while House and Senate conferees dickered over the change. Presumably that was the main idea. The final vote (94 to 20) indicates that defiance was a political dead end. But dead-enders tend to be bloody-minded. The state rep behind most of the amendments let it be known that he took out his hearing aids when South Carolina's governor, and his fellow Republican, met with GOP lawmakers to tell them why the Confederate battle flag could no longer fly in the state's name.

Jenny Horne, also a Republican, is convinced that the amendments were simply meant to gum up the works. “I thought the stall tactics were childish,” she said after the vote. “It turned into an endurance contest and we spent I don’t know how many hours doing something that the Senate did in a fraction of the time and I, quite frankly, was insulted. We had spent an entire day trying to slow this bill down and bog it down and force it to conference committee and drag this debate out for weeks and weeks and weeks, and I had just decided that it was time that somebody stood up and said what was the real issue here.”

She did so about 10 hours into the debate. She'd had half a sandwich to eat, and she'd spent a considerable amount of time listening to representatives give speeches about themselves. She says she didn't know what she was going to say when she stood up. What came out wasn't really a great speech, but it was a hell of a moment. She didn't make any new points, or phrase her points especially well. “I cannot believe that we do not have the heart in this body to do something meaningful, such as take a symbol of hate off these grounds on Friday,” she said, which is fair enough but standard. She managed to work in the economic angle: “there is an economic development prospect in Dorchester County that is in jeopardy because we refuse to act.” Which is valid but parochial (Dorchester being the district she represents). Really, the big thing she did was cry. She wailed. She spoke through tears and raised her voice as she did so, and she kept speaking even as her voice tore apart.

Did her speech make a difference? News accounts suggest as much, but maybe they're wrong. Amendments were still being put forward minutes before the final vote. The articles praising her haven't cited any stubborn lawmakers who stepped forward to say her four minutes turned them around. But her speech certainly mattered another way. She said what a lot of people have been thinking, and she said it with the same rush of outrage with which they've been thinking it. She was the voice of white America coming to grips with what the Confederate flag means to black America. (I would say she was coming to grips with what the flag means, period, but that's not the line she takes, and I bet most of white America agrees with her position, not mine.)

Afterwards, she explained what set the words going. “The only thing I could see in my mind was Mrs. Pinckney and those two precious little girls at that funeral,” she said. She meant the family of the late Senator Clementa Pinckney, one of the people killed by the white racist Dylann Roof. She was talking about emotion, but emotion rules either side of the flag debate. Logically, the flag is just cloth with a pattern. The flag, like any, becomes more because of the feelings that its history causes people to attach to it. White America was jolted by the sight of nine innocent, wholesome, law-abiding people killed because of their race. Once jolted, white America then considered the sight of the slaveholders' flag as it flew from a pole that the victims had helped pay for. A lot may be said after a moment like that, but it will all come down to the same few things: basically, “heritage” versus “how can you do that to those poor people.”

Rep. Horne wailed the latter point and the public had its YouTube moment. Conceivably a man might have roared the point. Tired of pettifogging delay, he might have gone red-faced. He might have shouted, “Those little girls don't have a daddy and now they have to see his killer's flag flying in the air.” Something like that—manly anger. Once upon a time, a woman who carried on like Rep. Horne would have been treated as an embarrassment, whereas the man would have gotten away with his bellowing (as opposed to her wailing). So the Horne incident demonstrates another change in our rules of life. Gays can marry, white Americans disdain the Confederate flag, and an emotional speech can be soggy instead of fiery. A woman can get up and be womanish in a stereotypical way, and people may still listen. The first two changes strike me as just fine, the last as so-so. But what the hell, I'll take the package.