Between the World and The New York Times

The establishment media tells Ta-Nehisi Coates not to be so bitter. 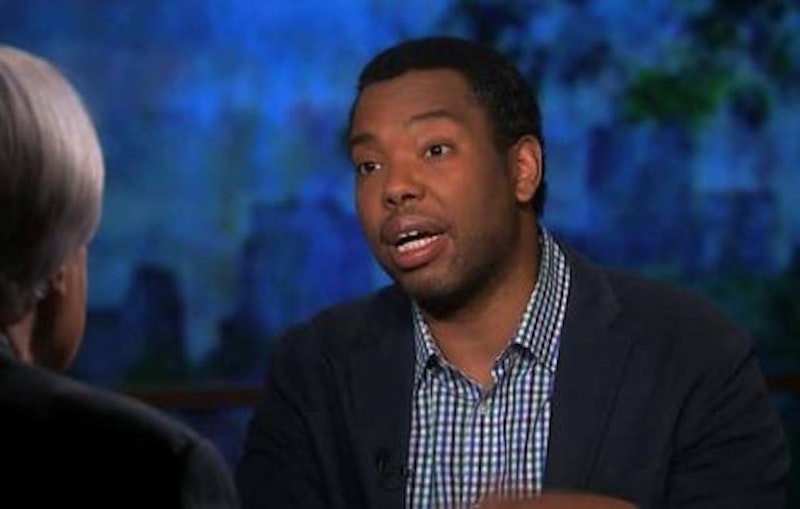 The Internet was supposed to fracture the media establishment. Where once conventional wisdom spoke with a single seriousness from a few balding organs, it’s now drowned in a cacophony of diversity. Billions of bytes refract billions of opinions; the media is no longer a monolith. At least in theory.

In practice, though, that old monolith still seems to harrumph with the same certainty as ever. The first two major reviews of Ta-Nehisi Coates' new book Between the World and Me appeared last week in The New York Times (under Michiko Kakutani's byline) and the Economist (unsigned). Or at least, they were billed as two reviews. Yet they seemed to have come out of the same keyboard. Both wag the same fingers and furrow the same brow; both warn and waffle, in a comfortable centrist vein, of the dangers of extremism.

Coates' book is framed as a letter to his 14-year-old son, Samori, about the dangers of growing up black in America. Both reviews earnestly, and inevitably, reference the recent Charleston shootings in order to demonstrate they’re on top of the latest developments, and that Coates' concerns about racism have some merit. But, both then move to the other hand, pointing out that things have in fact improved in America, and that Coates' grim view of the state of race relations is—in a word used by both reviews—"Manichean."

Both reviews single out the same passage from the book in which Coates says that after an unarmed college friend was killed by police, he was unable to muster sympathy for the police who died in the World Trade Center on 9/11. Kakutani delicately comments that this could be "easily taken out of context." The Economist insists that Coates' "honesty deserves some praise, but what it reveals does not." Coates needs to be less bitter; he should focus more on the positive, both reviews conclude. After all, Kakutani says, we've elected a black president—twice. And, the Economist rationally bleats, why does Coates emphasize the humanity of slaves but not of the enslavers? (This isn't the first time the Economist has complained of the wrongs done to slavers. It seems to be a staff preoccupation.)

The problem here isn't that the reviews are too negative. But there's a dry, thudding inevitability to the criticism here, voiced in the same tone of neutral, balanced authority, by two pillars of establishment journalism. The status quo assures you that things are not, after all, too bad (look at the black President!) The establishment will listen to your complaints and nod sagely and sympathetically as you describe your dead friend gunned down in the street. But it's important to keep these things in perspective, which is, after all, what the establishment does best. From up on top of its establishment pinnacle, it looks down and sees that we have more justice, more equality, and more opportunity than ever before. Progress is assured, despite minor blips. How can you doubt, when so many respected sources tell you so?

Perhaps the Economist and the NYT say exactly the same thing because they are bastions of objective ratiocination, and so have arrived at the same verdict independently. Or, alternately, perhaps they've arrived at the same viewpoint because they're both part of the same gray, beached bulk. Coates poked that bulk in all its complacency, and the great, saurian flab shifted and squirmed and emitted its flatulent verdict of patience, optimism, and indifference. In our high-tech, fragmented age, the NYT and Economist rush to assure us, there are prominent publications that can still emit, without questioning or individuality, the pompous nostrums of power.