This decade is completely different from the 1960s. 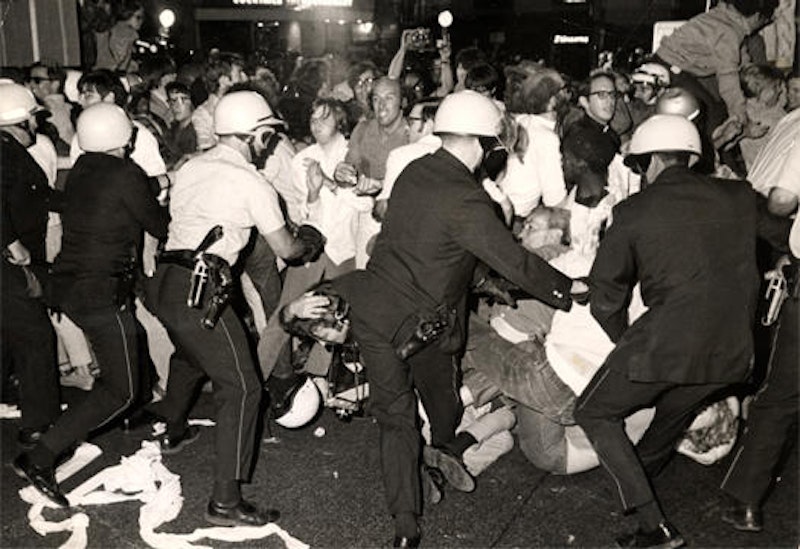 It’s troubling reading a temper tantrum by a man who’s on professional life-support. William Murchison, a septuagenarian whose columns are syndicated—I’m guessing dimestore-rates are a factor—sinks, sinks and sinks some more in a patch of quicksand of his own creation with his dusty op-ed “Return of the ‘60s,” which I saw in The American Spectator. The writer’s not a Boomer, too old, and has nothing but disgust for the 1960s, a “nutty, emotionally ugly, fog-brained decade,” that he’s apparently still seething over. Maybe he was a stuffed shirt in the mid-60s, with a job and family to support, and was resentful that he barely missed out on a lot of fun. Could be wrong: perhaps the writer secludes himself at night in a study, with his box sets of Perry Como and Percy Faith at the ready.

Here’s Murchison’s lame opening: “And so, as the 1968 election draws nearer… I know—some of you are thinking that I meant to write 2016 but fouled up my typing. Nope. Though the calendar year we live in is 2015, in spirit the moment closely resembles the 1960s. Maybe it is the ‘60s. Maybe, like Bill Murray in Groundhog Day, we awaken each morning to find ourselves living in a long-gone decade, with Sonny and Cher providing musical accompaniment.”

Murchison’s peg for his ludicrous claim that 2015 is like 1968 is the trouble flailing Democratic presidential candidate Martin O’Malley encountered over the weekend at the Netroots Nation convention in Phoenix. O’Malley, who sensibly said, “Black lives matter. White lives matter. All lives matter,” then backtracked upon recriminations from the crowd. Incredibly, the former mayor of Baltimore and Maryland governor explained: “I did not understand the tremendous passion, commitment and feeling and depth of feeling that all of us should be attaching to this issue.” How could O’Malley, who visited Baltimore (and was heckled) during the April protests precipitated by Freddie Gray’s death, not “understand” that this is an explosive issue—at least right now—in the presidential campaign? Then again, O’Malley’s kind of thick, so who knows why he couldn’t negotiate a simple talking point at this particular venue.

Minor news, really. But Murchison equates O’Malley’s retreat with cowed leaders in the 60s who pandered to protesters, not caring “about free speech and civic processes.” Let’s be clear: police misconduct is on full display in the past couple of years, and it’s an issue every national political candidate needs to address. But this isn’t 1968, when hundreds of thousands of Americans marched in opposition to the Vietnam War; when cities burned and lives were lost after Martin Luther King’s assassination; when students took over universities; when LBJ was forced out of the election because of Vietnam fatigue and challenges from Gene McCarthy and Bobby Kennedy; when George Wallace ran an openly racist and popular campaign; when the violent Democratic Convention in Chicago changed politics forever, spawning a new generation of politicians; and when Richard Nixon ran a deeply cynical (and successful) campaign against the LBJ-castrated Hubert Humphrey, telling fibs about a “secret plan” to end the war.

In fact, it’s not 1972 either, as the left-wing George McGovern, a decent man probably overly influenced by his advisers, was crushed by the Nixon Machine, as dissent in the country continued, often pitting parents against children. Today, it’s not uncommon to see the opposite: graybeards accompanying their kids not only to nostalgic rock concerts (Grateful Dead, Bob Dylan, the Eagles!, Rolling Stones), but political protests as well. It’s not 1992, when the riots over police mistreatment of Rodney King resulted in the worst unrest in Los Angeles since Watts in the mid-1960s. And it’s not 2008, as Barack Obama, already ahead of the feeble John McCain, was assured victory when the economy collapsed.

Translated: every presidential cycle has its own peculiarities and issues, some more heated than others. But Murchison, in his waking nightmare, won’t have it. His comparison of 2015 and 1968 continues with this very ugly paragraph: “While American negotiators bend to the demands of Iranian mullahs, and demands go forth, uncontradicted, for junking the post-1865 reconciliation worked out by Yankees and ex-Confederates, free speech and free exercise of religion come under assault… Everywhere today, it would seem, there is the stench of the 1960s, when reason and manners took a backseat to anger and destructive impulses.”

Finally, he concludes, “a bunch of nuts are on the loose.” We all have our definition of “nuts,” but I wouldn’t include Americans upset by the apparent rise in police savagery—of course, other such Freddie Gray/Eric Garner/Michael Brown murders certainly transpired before the age of social media—in that subsection of the populace. The hysteria on college campuses, promulgated by both faculty and students, is a different story altogether, but let’s march on and simply stipulate that William Murchison, like many right-wingers, hasn’t an inkling of what’s really happening in the country, and because of that he’s blinkered by memories of what he considers the bad old days.