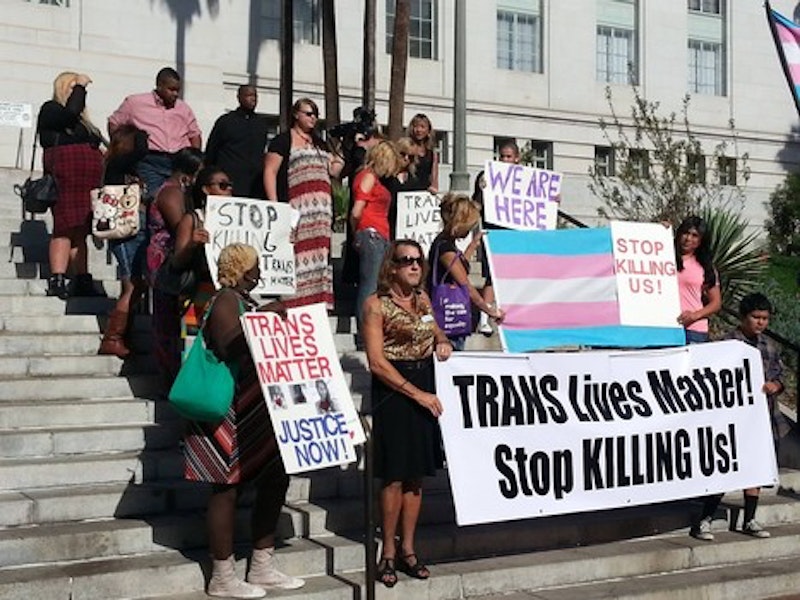 Transgender ex-male journalist Zoey Tur threatening—four times—to beat conservative journalist Ben Shapiro is just the latest evidence of how far we’re all now expected to bend to maintain the pretense that the trans activists are all sane.

Tur threatened during an on-air panel discussion with Shapiro to send Shapiro “home in an ambulance,” later said “I’ll see you in the parking lot” according to Shapiro, added on Twitter that she should “curb stomp” Shapiro, and confirmed in a later radio interview that she had indeed threatened Shapiro.

It’s remarkable, really, how much trans activists and their allies have deformed public discourse, given that transgender people make up only about .3 percent of the population. To be clear, I don’t think they should be jailed, harassed, or institutionalized. But it’s increasingly obvious that basic tolerance is not going to be enough to satisfy some of them. I’ve seen leftists applauding Tur’s violent threats online, and the trans movement as a whole seems to have become a strange intimidation campaign.

Rightly or wrongly, the belief that you’ve transformed yourself from one sex to another must at times be a tricky one to maintain. It seems, then, as if we are all expected to pitch in and help maintain that belief—even if that means, to take a couple of recent examples, telling ordinary transvestites not to participate in a gay pride parade lest they offend the more full-fledged transsexuals with their antics, or letting biologically-male people into a women’s college if they claim to identify as women while throwing out biologically-female people if they claim to identify as men.

The parents of a mere toddler who were in the news for planning their child’s sexual reassignment treatments over a decade in advance, had lavish praise heaped on them by commenters on sites like Huffington Post—but could not bear to talk to their own extended family for fear the relatives would criticize the transition plan.

Perhaps the relatives shouldn’t criticize—and I fully admit parents know their own children better than me—but I also know kids go for weeks thinking they’re, say, firetrucks (and I met a transgender adult who later decided he wasn’t transgender anymore, and another who went all the way and got an operation—obviously, people vary). You have to wonder, too, whether some parents in these situations are admirably tolerant or, just maybe, are the sort of stealthy, unwitting control freaks who wish they’d had a child of the other gender.

I mean, we know very well there are traditionalistic dads out there wishing they’d had boys and thereby subtly pressuring their unhappy daughters to take up rugby, etc. Do we really think it impossible for that sort of wishful thinking to happen among progressives? Is it too late in cultural history to raise such questions—even if I want everyone involved to end up happy, flourishing, and tolerated?

Then, too, there is the pressure for the entire population to alter its use of pronouns—even to stop calling newborns by the genders their genitalia would seem to indicate—all, in theory, to avoid upsetting that very rare .3 percent of the population. I’m an atheist, but not the kind who sends a memo to everyone else in his neighborhood demanding they stop saying “Bless you” if I sneeze. The outlier has to do most of the adjusting in society. That’s just efficient.

Would it be so wrong if the rest of us just sort of went about our business, neither trying to immiserate trans people nor devoting a portion of every day to keeping them happy, altering all restrooms, revising all college admissions policies? Can we not just get on with our lives—if the real goal is to keep subsets of the population from burdening and annoying each other?

But maybe that isn’t the real goal. Maybe the real goal is just for the hypersensitive left to seize the latest in a never-ending series of cudgels with which to beat the entire population into feeling guilty. Guilt-wracked people are easier to control, after all (religious conservatives know that trick!). Keep in mind that pro-trans activists have even condemned as oppressive Ru Paul and Dan Savage for using the term “tranny.” How are these activists ever going to cope with the rest of the human race—tolerate the rest of the human race—if they can’t even handle Ru Paul and Dan Savage?

(And why haven’t people yet gotten around to demanding that we treat dwarfs as if their size is nothing unusual while we’re playing these egalitarian-sensitivity games, I sometimes wonder? Is that next—or will it be learning to accept “otherkin,” the people who claim to identify as other species? Again, I honestly want everyone to be happy. I just don’t want to have to keep scheduling around the mandatory month or so of sudden outrage, at least not without more advance warning than the left typically gives us when they decide overnight that something has been obvious since the dawn of time even though it appears made-up to almost everyone else.)

Even a very scrupulously left-wing writer I met, who wrote an entire book very sympathetically depicting people who get sex-change operations, ended up inadvertently angering the trans community for the crime of noting (real) stats on the surprisingly high number of ex-males who become prostitutes. The sketchy evidence suggests they have a high rate of several psychological problems as well—and maybe that’s society’s fault, but it’s still true. We still allow truth, right? Yes?

The left strives to look both tolerant and unified, and that gets even more tricky when some ex-males show a tendency to be oddly aggressive, sometimes violent—rather like males, you might say—and nonetheless to demand inclusion in lesbian and feminist events.

And this dilemma may be coming soon to a restroom near you, ladies, for good or ill. Who are we to say that any man in a dress shouldn’t be in there with you, so long as he swears he’s not doing it for sexual thrills? We can’t read his mind, after all.