Richmond is No Longer a Murder Capital

A gun plus drugs gets you five years. 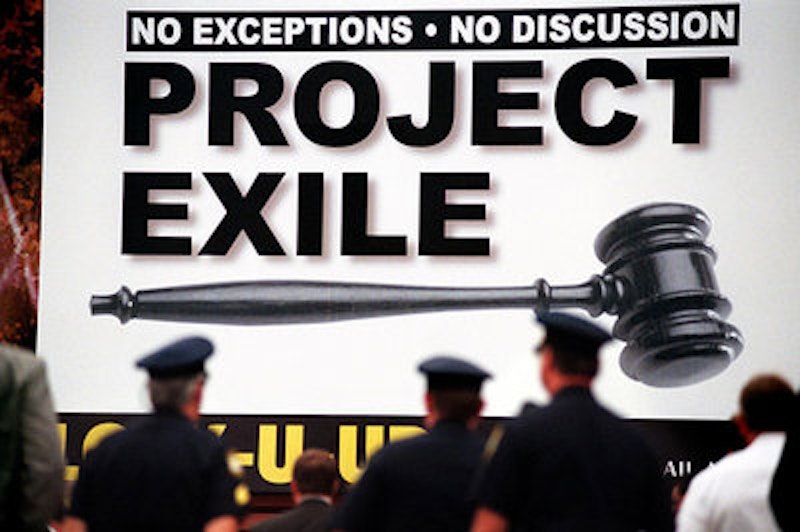 Not so long ago, I thought of Richmond, Virginia as a murder capital—sometimes even the capital, which it was in 1997—of the United States.  Crack was big in the 90s, and the city was ravaged by that epidemic. Predating my knowledge of the crime problem was my woeful preconception of Richmond as city of yokels and rednecks. In fact, before I made my first trip to the city, I’d actively avoided it for years.

Murder rates are verifiable, but my northeastern perspective was based upon ignorance and prejudice. How ironic that I now live in the place I’d long pictured as some terrifying combination of Smokey and the Bandits and New Jack City. But that’s not true. Richmond has a lot going for it: memorable architecture, good restaurants, bars and few vehicles with rifle racks on the city streets. Sure, they vote "redder" than I'd prefer, but it's hardly Sheriff Joe's Maricopa County here.

As for the murder rate, another pleasant surprise. The good news is it's dropped way off. What stopped the killing? That depends on whom you ask. Talking to onetime Richmond Mayor Tim Kaine, for example, you'll be told that Project Exile deserves the credit. Project Exile was a coordinated effort between the Richmond Commonwealth Attorney’s Office, Richmond Police Department, the U.S. Attorney’s Office, and the Bureau of Alcohol, Tobacco and Firearms to target convicted felons carrying firearms by enforcing the federal statute (18 U.S.C. 922(g)) prohibiting convicted felons from carrying firearms. A violation of this law gets you five years minimum in a federal prison.

Criminals hate being tried in federal courts, as they know they'll get stiffer sentences, have little chance of bail or parole. They might get sent away as far as Texas. Facing hard time in a federal prison is a deterrent to crime, and part of Project Exile was spreading the word about what carrying a gun could now get you. The message went up on billboards, city buses, TV commercials, and supermarket bags. David Boone, a Richmond attorney when Project Exile was in place, noticed that his clients were well aware of the program. "A lot of them can't add two and two, but they know a gun plus drugs equals five," is how he put it, not without a tinge of racism.

The NRA loved Project Exile. It was all about stricter enforcement of current gun laws rather than making guns harder to purchase for law-abiding citizens, which is the mantra they preach, and Wayne LaPierre lobbied for similar programs to be enacted in other cities. However, not all of his fellow right-wingers shared that enthusiasm. Hardcore Second Amendment advocates were appalled, believing that all anti-gun laws are unconstitutional, and unconcerned that these laws would only be enforced against felons.

Other right-wingers attacked Project Exile as an incursion on states' rights. The ATF’s involvement was a factor, too. The ATF is just about the personification of Satan to this group, and Ruby Ridge and Waco still burned in their collective memories.

Federal mandatory minimum sentences are not popular on the political left, and eyebrows were raised over the fact that the new initiative focused on inner-city areas, thus effectively targeting blacks. I'm not sure what they thought about the fact that 80 percent of the victims were black as well. Some pointed out that Norfolk, Virginia had a greater drop in the murder rate over the four-year time period that Project Exile was in effect.

It’s no simple matter to account for Richmond so quickly dropping out of the murder headlines. The local murder rate certainly dipped substantially after Project Exile, but other national crime-related trends came into play as well. What it amounted to was that drug dealers couldn't shoot like Doc Holiday, and they were killing a lot of innocents with their gunplay on the streets. A sense of urgency, probably bordering on panic, set in, allowing the Feds to ride into town wearing their white hats.

The Project Exile approach is hardly a cheap solution to a societal challenge. Imprisoning people is expensive, and the U.S., with only five percent of the world's population, already locks up 25 percent of the world's prisoners. Regardless of what did the trick here (it was probably a combination of factors), as a resident of Richmond I'm glad to be a beneficiary and happy I was wrong about the redneck part too.