This isn't some "moment of tenderness." 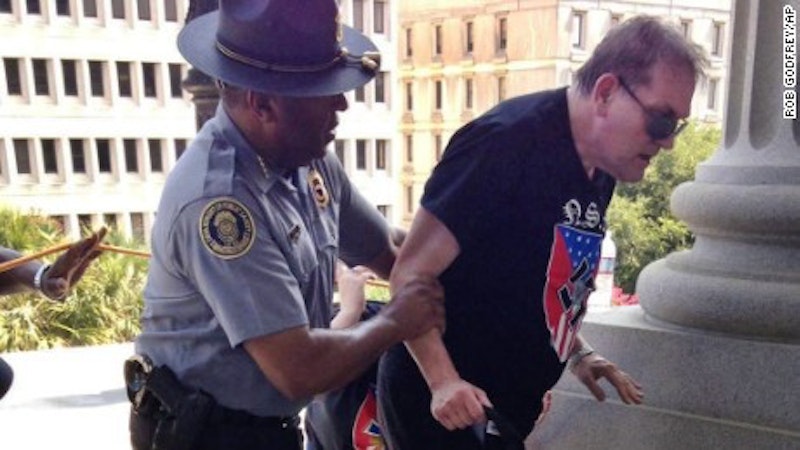 In the age of instant tweeting and an endless arsenal of photos emerging from any event of even minor notability, rarely does a single image go viral without appealing to a large cross-section of viewers and sharers for multiple reasons. One would be hard-pressed to recall such an image with more nuance behind its instant popularity than that which was taken at a rally organized by the Ku Klux Klan and the Detroit-based white supremacist group National Socialist Movement outside the Statehouse in Columbia, SC. The cellphone picture was taken by South Carolina governor Nikki Haley's spokesman Rob Godfrey and depicts head of the State's Department of Public Safety Leroy Smith assisting an as-yet unidentified though apparently heat-stricken middle-aged man up the steps and presumably to a temporary place of shelter.

The photographer went so far as to say, "What Leroy Smith did totally overshadowed what went on at the Statehouse when those from outside South Carolina tried to disrupt a time of healing and unity in our state." That's the sort of spin officials in the state have expertly employed in the weeks following the mass shooting in Charleston. After widespread public outcry in the wake of discovery of the gunman's motivations and ideological sympathies, the long-waving Confederate flag was finally removed from the Statehouse. For many, this was a small gesture that should’ve happened decades earlier, but ultimately the public's reaction both in South Carolina and nationally was overwhelmingly supportive and to some extent even celebratory as the state made an important—albeit symbolic—attempt towards shedding its disgraceful history first with its past support of slavery and then a century later its resistance towards the changes brought about by the Civil Rights Movement.

Unfortunately, not everybody is "on the same page." Godfrey tries to distance the KKK rally from what is in the hearts and minds of citizens in South Carolina, and to an extent it may be true that few supported the chants of "white power!" and proud display of swastikas and other fascist symbols and insignias. Racism in 2015 presents itself as more ambiguous and hidden in arguments over "heritage" and "state's rights." The KKK, the National Socialist Movement, and organizations like them are clearly outliers in America's contemplation of race and prejudice.

The modern racist probably won't chant racial slurs or make offensive bodily gestures likening black people to monkeys, but he or she might wonder what the big deal is about a flag that means different things to different people or why a "black lives matter" campaign is so important when, dammit, all lives should matter. It’s this sort of obstacle to more significant and lasting social change for whom this kind of image is comforting and confirms their belief that racial tension and injustices are greatly exaggerated by the media and politicians eager to speak in support of an increasingly popular position.

Except the picture, even without reading too deeply into it, reveals a great deal about the biases of many if not most who shared the image as a "moment of tenderness" or something equally vapid and simplistic. For his part, Smith avoided reporters for days before finally speaking through a spokeswoman. Unsurprisingly, he asserted that he was merely doing his job and dedicated most of his statement to praising his fellow officers for doing their own jobs. Beyond the obvious "black officer offers assistance to white neo-Nazi" angle that could be credited for the vast majority of the image, what is particularly noticeable is how Smith is outfitted compared to many officers at rallies and demonstrations concerning similar issues over the past year.

Smith's service firearm is clearly visible in the photo, but he's not exactly in riot gear and doesn't appear to have any higher caliber weaponry at his immediate disposal. In fact, while some such gear and weaponry was reported among some members of law enforcement, the police presence was shockingly low-key considering this was a demonstration without any speeches and whose purpose was apparently to antagonize as many people as possible.

Part of the "moment of tenderness" narrative relies on the near-truth that what occurred was a case of "dueling rallies." In addition to the 50-or-so proud racists who chanted pro-white and anti-black slogans, an earlier demonstration was held by the New Black Panther Party. Having no official connection to the historically significant if long defunct Black Panther Party, the NBPP has for years been less than a positive force, being declared by the Anti-Defamation League, the Southern Poverty Law Center and other similar organizations as a hate group. That said, there simply is no non-white equivalent to the KKK, and if there was one group present to antagonize as many people of a different race as possible, it was almost certainly the neo-Nazis.

It's details like those which make the widespread approval of Godfrey's photo all the more offensive and absurd. Smith helping the racist can't just be an officer doing the job for which he is responsible and some hateful loser who got too much sun. It's seen instead as the usual cliché of "a picture says a thousand words," which in this case is close to the truth, only with completely different words than the most enthusiastic sharers appear to comprehend. This isn't some bridge between "black lives matter" and "bring back segregation." Smith's personal feelings towards the man and his organization were irrelevant to him because it was his job and he's a genuine professional. Many, if not most, of the pro-Confederate flag supporters likely feel he shouldn't hold such a position of authority. Real social progress is much messier than a photo like this might suggest to the easily suggestible, but for the rest of us, particularly those committed in some way to social justice, it’s important to see these images for what they are, and to keep in mind who’s responsible for helping them to go viral and what exactly it is about this sort of image that connects with so many people regardless of what their convictions are or where their sympathies lie.