The Democrats handed the governorship to Larry Hogan. 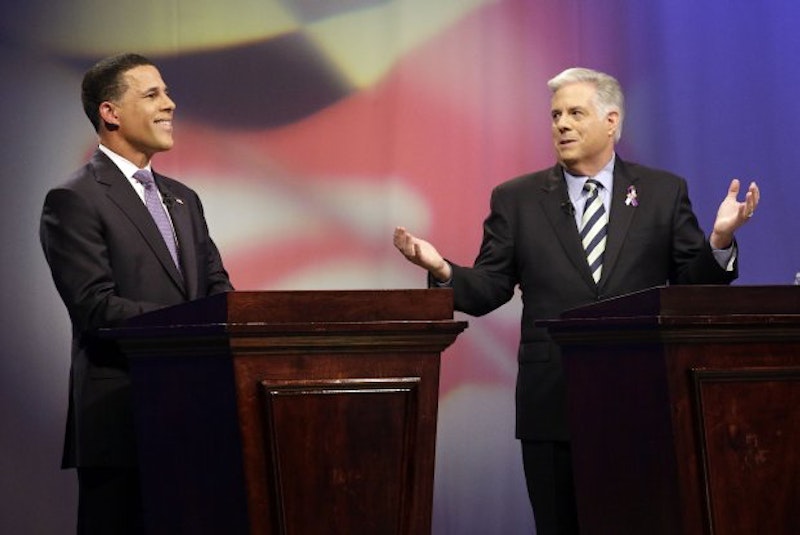 On the evening after President Obama’s appearance in Maryland to boost Lt. Gov. Anthony Brown’s candidacy, a key Brown adviser confided that internal polls showed the contest for governor was much closer than the public suspected.

“It’s going to be tight,” the adviser said.

“Brown made a mistake bringing Obama in,” the adviser was told. “If I were Brown I’d be worried about the white vote.”

“The polls show that whites aren’t going to vote for Brown,” the adviser said. “Obama will help get out the black vote.”

“Remember the silent majority,” the adviser was told.

That factual exchange was the penultimate tip-off, one of many that the Brown campaign was crashing. Other indications were the C+ performances in the debates, the duck-and-cover campaign from launch day, the low voter turnouts in the primary and the decision to go negative that drew public rebukes from many Democrats, including his former primary opponent and now supporter, Heather Mizeur. Brown early on described his primary election as the “mountain” and the general as the “molehill.” Brown got his hillocks confused.

In the end, the showdown wasn’t tight. It was a blowout. Neither Obama nor his wife, Michele, nor Bill Clinton nor his wife, Hillary, nor a $20 million campaign that was mostly negative, as well as a man without a plan, could arouse Maryland’s vaunted Democratic behemoth. And the lack of enthusiasm and low turnout illustrate the significance of the black vote as the bedrock of the state’s Democratic party. When blacks turn out, Democrats win; when they stay home, Democrats lose.

Not that his was a campaign based on race. Far from it. Race was never even mentioned until Democrats sent out a last-minute flyer conflating Brown’s campaign with the civil rights movement. And why should race have even been an issue? Brown is the product of a bi-racial family—a Swiss mother and a Jamaican father—and was divorced from a white woman and re-married to a black. His Republican opponent, Larry Hogan, had a black running-mate—an ebony and ivory ticket is now standard issue in Maryland—and is married to a Korean-American. Welcome to America, 2014. Not a word has been said or heard about Maryland rejecting the chance to elect its first black governor and only the third in the nation.

Yet Hogan won by a margin of more than 76,000 votes, or 5.7 percent, in a state where Democrats outnumber Republicans by more than two-one, reflecting the Republican thunderclap that rattled America without being driven by national issues. The statewide voter turnout was 44.5 percent, a middling showing in a midterm year.

Demographics are no longer destiny. The turnout in the Democrats’ three stalwart areas was about 10 points below that number across the board—Baltimore City (nine-one Democrat and 69 percent black), 35.3 percent, the lowest in the state; Prince George’s County (73 percent black) 37.9 percent; and Montgomery County, 38.9 percent. Those turnouts parallel the low primary showings in those three subdivisions, where Brown supposedly had territorial claims, when the turnouts were less than 20 percent.

Maryland’s election results were an accumulation of grievances—decidedly anti-tax but along with that no doubt a toxic mix of anti-gun control, anti-abortion, anti-immigrant, anti-gay marriage and profoundly anti-O’Malley as well as anti-Obama. There may have been a hint, too, that when voters looked at Brown they saw another Obama and thought, not again. Add up all the small constituencies and gripes and they form one large unforgiving electorate that helped to propel Hogan to victory. Add to that a near flawless campaign.

Democrats represent population; Republicans represent geography. Outside the Democratic strongholds along the I-95 corridor, turnouts were heavy, often exceeding 50 percent, especially on the Eastern Shore and in Southern Maryland. In the end, Brown wound up winning only four subdivisions out of 24. White older Democrats found common cause with Republicans in rebelling against the policies of Annapolis and, in fact, Democrats in general. Republicans also picked up at least nine seats in the General Assembly which, in recent times, tends to be more liberal than the voters who elect its 188 members.

Hogan showed, too, that money isn’t everything its cracked up to be in politics when the message is in tune with the times. Hogan and the Republicans spent the paltry sum of $4 million—including $2.6 million in public financing—compared with Brown’s $19.5 million.

So the record is intact, for those who keep scorecards—no lieutenant governor of the four of seven who have tried since the office was reconstituted in 1970 has ever succeeded to the governorship, either by their own inadequacies or because of the baggage heaped upon them by their patrons. Blair Lee III schlepped the baggage of Marvin Mandel; Melvin Steinberg suffered the strictures of the madcap William Donald Schaefer; Kathleen Kennedy Townsend bore the transgressions of Parris Glendening; and now Brown was assigned blame and victim of voter discontent with the term-limited Gov. Marin O’Malley.

But there was more to Brown’s defeat than O’Malley’s record of tax increases and the relentlessly focused attacks by Hogan, 40 new taxes by his count. In a nutshell, there was no visible organization effort on Brown’s behalf. Baltimore Mayor Stephanie Rawlings-Blake did little to flush out voters, nor did Prince George’s County Executive Rushern Baker, both black leaders of hugely black majority jurisdictions.

O’Malley, for the most part, was nowhere to be seen except often out-of-state campaigning for president. Even Brown’s expensive high-tech voter delivery program, under the direction of Obama’s former campaign manager Jim Messina, failed to lure voters to the polls.

For all of the resources available to Brown, he had no compelling message, if any at all, other than expanding pre-K to every child in Maryland but lacking a funding source to support the plan or convince voters. By contrast, Hogan had a well-researched (but with some questionable math), thoroughly honed message of over-taxation that resonated up and down the economic scale of Maryland voters. The message of this election is, have a message.

Finally, unable to deliver the Democratic base and even hold party voters in line, Brown lost standing with many liberal Democrats who viewed him as, to put it charitably, not quite ready for prime time. Many either passed on governor or defected to Hogan.

So now the question being asked is just what happened in true-blue liberal Maryland which, along with Massachusetts and Illinois, is no doubt among the three most loyal Democratic states in the nation? All three states lost to Republicans on election night.

Though Maryland has always been predominately Democratic by heritage and tradition, if not conviction—there have been only three, soon four, Republican governors since 1950—the state voted twice for Dwight Eisenhower, once for Richard M. Nixon, twice for Ronald Reagan, and its most ardently good government county, Montgomery, where Democrats reign two-to-one, has elected only two Democrats to Congress since 1960, Michael D. Barnes and Chris Van Hollen Jr. (Democrat John Dulaney joined the delegation in 2013 as a result of re-drawn Congressional boundaries, though his Sixth District includes only a piece of Montgomery and all of Western Maryland.)

But the velocity of history carries an audacious message. Today, the Maryland of 2014 is arguably the most liberal, at least on paper, and surely among the most reliably Democratic states in America, scaling the charts past Irish-pol-cum-academic Massachusetts and mellowed-out California.

Democrats have controlled the Maryland State House for 37 consecutive years, and even in electing Republican Agnew in 1966 in a rare aberrational fluke helped by break-away Democrats, the remaining three statewide offices and the General Assembly continued steadfastly in Democratic control, as they will with Hogan.

And after a long dry spell, the GOP again seized the moment in another departure from tradition by installing Robert L. Ehrlich Jr. as only the third Republican governor in more than half a century, more by dint of the flawed candidacy of his opponent, Townsend, than any seismic political shift. Ehrlich was ejected after one term by O’Malley and repulsed again when he tried to recapture the office in 2010. It’s a twist that O’Malley ousted a Republican and now turns the governorship back to the GOP.

Liberal and Democrat are not necessarily interchangeable nouns, but they seem to fit Maryland as a whole if not many of its independent parts. As every political hobbyist knows, the new axis of liberalism in Maryland involves only three of its subdivisions—those that voted for Brown—homes to the bulk of the state’s black population, its army of government workers, many union members and the highest concentration of Ph.D.s on earth.

And therein lies the tale of Maryland’s political evolution, from conservative backwater state, schizophrenic from the competing tugs of southern traditions and northern allegiances, to a progressively liberal Democratic thumb in the eye of Republicans and conservatives on its suburban and rural margins.

But immigration is changing that, too. Newly arrived Hispanics, Asians and mid-Easterners are forging new alignments and coalitions and eventually might compete with blacks at the voting booth for the new backbone of the Democratic party.

That, too, is evincing a backlash among xenophobes and the conservative flank of the Democratic party which might, in part, have contributed to Brown’s defeat and Hogan’s victory. The O’Malley-Obama coalition of women, minorities and young people, simply put, collapsed. For, in a sense, the more Maryland changes the more it stays the same.