GOP Ignores John Kasich At Its Own Peril 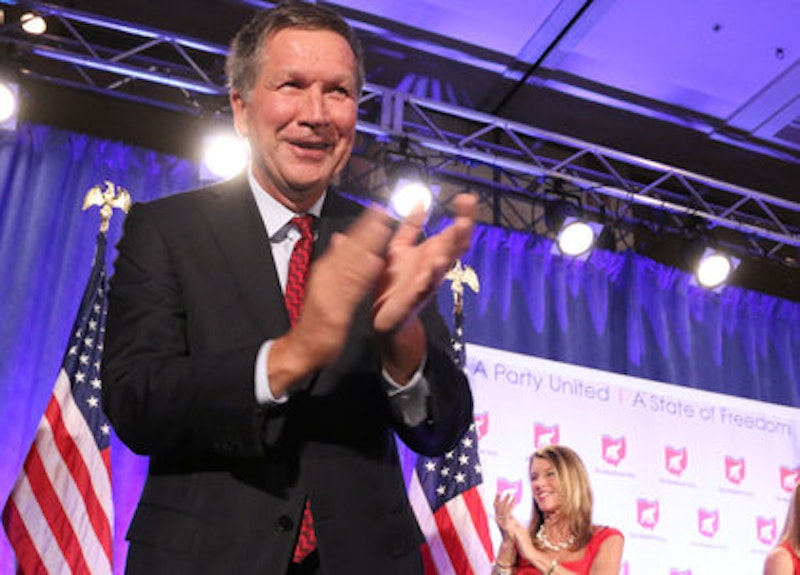 You’d think, after last week’s lopsided Republican win in the midterm elections, that John Kasich, who won reelection by 31 points, would’ve leapt to the first tier of GOP candidates for the 2016 presidential election. He’s from the ubiquitous battleground state of Ohio; is a governor (and former nine-time Congressman) at a time—when Barack Obama’s short resume is ridiculed—when executive experience is a plus; he’s a tax-cutter and fiscal conservative; comes from a middle-class background; and is well-known in the media. Kasich is not gifted oratorically, but it’s quite possible that Obama, after a lackluster tenure has negated the “charisma” factor. And you don’t win so many elections without some expertise at connecting with voters.

Yet Kasich is only nominally mentioned as a serious contender, with most of the attention going to Sen. Rand Paul, Gov. Scott Walker, Sen. Marco Rubio, Jeb Bush and frighteningly, Sen. Ted Cruz. Ostensibly, the rap on Kasich among the GOP’s base is that he caved in on Obamacare (though he opposes the bill) by accepting federal money to expand Medicaid in Ohio. Disqualified, say some: the Republican primary voters will never nominate a man who committed such apostasy, even if he could stand the best chance in the general election against plutocrat Hillary Clinton, or whomever wins the Democratic nomination and attempts the rare feat of extending a party’s occupancy of the White House for three terms. A Kasich/Rubio ticket would be formidable—at least at this point, before extensive vetting takes place—giving the GOP solid footholds in the Midwest and Florida, with Rubio certain to improve the Party’s percentage of Hispanic voters to at least the level of George W. Bush’s two elections.

It’s too early for Kasich (or other hopefuls) to announce his intentions, but he clearly has the presidential itch: his embryonic 2000 national campaign was snuffed out when Bush, also a “compassionate conservative” was given money by the wheelbarrow without even breaking a sweat. Similarly, it’s said that if Jeb Bush runs, he’ll rake in the establishment Republican donations, again leaving Kasich in the dust. I continue to believe that Bush won’t ultimately run, despite all the hype to the contrary in the past six months: his brother is enjoying a very modest reappraisal, in the wake of Obama’s failures, but the Bush name is still poison to a huge swath of the electorate. “Democrats for Jeb” is the unlikeliest poster you can imagine.

Writing in Sunday’s New York Times, nominal conservative columnist Ross Douthat clearly illustrates what I’ve outlined above. His idea is that a battle between Paul and Rubio would be best for the Party, because both men have serious visions of American policy (as opposed to Cruz, whose demagoguery on issues ranging from immigration reform to enforced cultural morality wins the day with the Christian Right, but to more rational citizens reprises, decades later, the specter of Sen. Joseph McCarthy). I’d thought that New Jersey’s bombastic Gov. Chris Christie, his state awash in red ink, along with corruption charges and a mouth that makes The Honeymooners’ Ralph Kramden look tiny, was in the national penalty box, but Douthat falls back on him as a challenger, as well as Walker, Mitt Romney, Mike Huckabee and Cruz. Kasich doesn’t even merit a mention.

This is nut of Douthat’s argument for a Paul-Rubio showdown:

I admire Paul’s outreach to minority voters, and I was very skeptical of the immigration bill Rubio shepherded through the Senate last year. But I have agreed with practically every domestic policy stance the Florida senator has taken since, and his reform agenda seems more sensible on substance and more plausible than Paul’s more stringent libertarianism. But then on foreign policy my sympathies reverse. Paul’s ties to his father’s more paranoid worldview are problematic, but the realism and restraint he’s championing seem wiser than the G.O.P.’s frequent interventionist tilt… I have to imagine that with [a Rubio administration] there’s reason to worry we’d get incaution and quagmire instead… Rubio’s record and statements are more in line with the neoconservatism of the Bush era.

Right now, we have no real idea about Kasich’s foreign policy beliefs (or those of Scott Walker, either), but should he run there’s no doubt a global “fact-finding mission” will be in the offing, probably before next June—again depending on Jeb Bush’s decision.

Does Kasich deserve the dreaded label RINO aimed at him by Republican purists? Hardly. He’s pro-life and anti-gay marriage (although he doesn’t emphasize them); an enemy of unions; a private-sector job creator; and balances budgets. If his refusal to demonize the poor is an electoral handicap among some conservatives, then it’s likely the Democratic candidate wins in two years.

The other day I asked two liberal D.C.-based political reporters what Republican candidate the Democrats feared the most. Both said Jeb Bush. One of them amplified: “Kasich may be the most electable, but I don’t see him getting that far. His bleeding-heart comments justifying Medicaid are anathema in the [GOP] primary.”

I like and respect both reporters, but think that’s pre-Nov. 4 thinking. The main takeaway from the 2014 midterms—aside from widespread Obama fatigue—is that Republicans (and their donors) are intent on taking back the White House. Unless, Kasich has some disqualifying skeleton, he could be the Party’s best bet.