Why The Atlantic Doesn't Want Me Anymore

No free speech for freelancers. 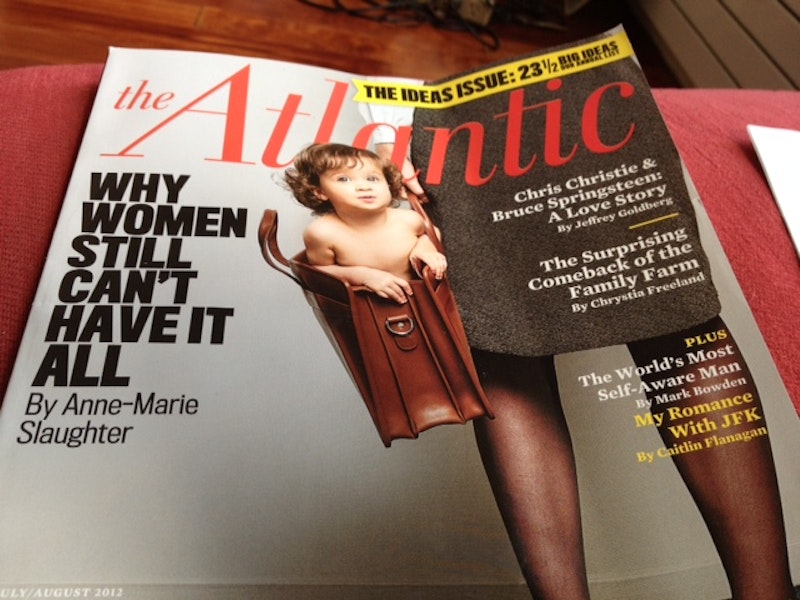 Update: On December 1 the digital editor at The Atlantic told me there had been a miscommunication and that I could still pitch for the magazine.

The Atlantic frequently touts the virtues of free expression and vigorous debate. A recent story lamented the "Closing of the American Mind" on campus, and berated college students who refused to listen to opposing viewpoints.

I was surprised, then, when the magazine dumped me for the sin of vigorous debate. As a freelancer, I've written approximately 150 articles for The Atlantic since 2011. They even gave me a little title for a while, "contributing writer," to acknowledge the frequency of my appearances. I worked with numerous editors on numerous channels. It was a great gig, and I was proud to be such a visible part a prestigious magazine.

But it's over. My editor told me last week to pitch no more, because of this piece on Jessica Jones, published on Splice Today.

The essay was, I thought, a self-deprecating, humorous take on the ridiculousness of the cultural journalism treadmill. I mentioned an Atlantic article in passing, but it never occurred to me that anyone would take the piece as some kind of condemnation of the magazine. But that's how my editors saw it. If I disliked the magazine so much, they said, then it must not be a good fit.

There's some history with this, as there always is. I've occasionally criticized, or disagreed with Atlantic articles in the past. In particular, I got chewed out for this piece disagreeing with culture editor Sophie Gilbert, and this one disagreeing with writer Conor Friedersdorf. (The last is especially ironic, since Friedersdorf writes regularly about the dangers of stifling free speech.)

These essays, I was told, were mean-spirited. If I wanted to disagree with an Atlantic writer at a different venue, I should first notify my editor—and modify my tone. The Atlantic was not trying to dictate what I wrote. This was simply a matter of collegiality and professional courtesy.

If I were on staff at The Atlantic, and receiving regular assignments and health benefits, then I'd feel a lot better about having editors weigh in on my writing for other venues. But I'm a freelancer. That means no health benefits, but also, generally, that you aren't beholden to any one publication. I've written for The Guardian; I've also criticized The Guardian. I've written for The New Republic, and criticized The New Republic. I've written for Slate and criticized Slate. I write for a lot of venues. If I were to collegially double-check with editors every time I criticized someone at a publication I've been associated with, I’d be spending my days collegially double-checking rather than actually writing and (trying to) make a living. Editors, in my experience, generally have better things to do than make sure some freelancer is taking the proper respectful tone with staff writers. Besides, vigorous debate is supposed to be a good thing, right? You write a controversial article, people think about it and argue with it. I thought that was the goal.

And for some people it is. When Atlantic superstar Ta-Nehisi Coates publicly told off his colleague David Frum on Twitter, I doubt the editors showed up in his inbox to reprimand him. Ta-Nehisi Coates is Ta-Nehisi Coates, though. I'm just a freelancer—and one who has appeared in The Atlantic less frequently this year as they've moved towards more writing by staff. The Atlantic has always felt like an unusually hierarchical venue to me, perhaps because its business model is built in part on monetizing its top columnists through appearances at its Ideas Forum. You don't want the little people tarnishing the reputations of those who matter.

My time at The Atlantic was hugely rewarding; I had great relationships with most of my editors. Part of the reason that I respond to and criticize Atlantic articles (like those by Sophie Gilbert and Conor Friedersdorf) is because they're interesting and worth engaging with. I wish they still considered my contributions valuable—but they certainly don't owe me a platform. I'm not a free speech martyr. I'm just a freelancer who, for financial and ethical reasons, couldn't abide by The Atlantic's ground rules.

Still, given The Atlantic's occasional free speech encomiums, I think it's worth pointing out, in this context, how free speech actually works. Mainstream magazines devote a lot of space to lambasting college students for the failure to listen to divergent viewpoints. But will Friedersdorf write about how The Atlantic wanted to regulate how I disagreed with him?

The Atlantic's actions here seem unusually petty, but all influential magazines use that influence to regulate the public discussion in one way or another—by giving some issues (like college free speech, for example) a large platform, or by rejecting ideas that seem uninteresting, outside the mainstream, or simply out of line with the venues' ideology (advocating more public spending doesn't fly at Reason.) Some free speech is seen as valuable and worth defending, and other free speech is illegitimate trouble-making. Those with institutional power determine which is which. As I discovered, magazines like The Atlantic are in the business of regulating and controlling speech, not in the business of freeing it.