Trump’s Prose is the Voice of Middle America

The carnival barker’s become the cultural tastemaker in the United States. 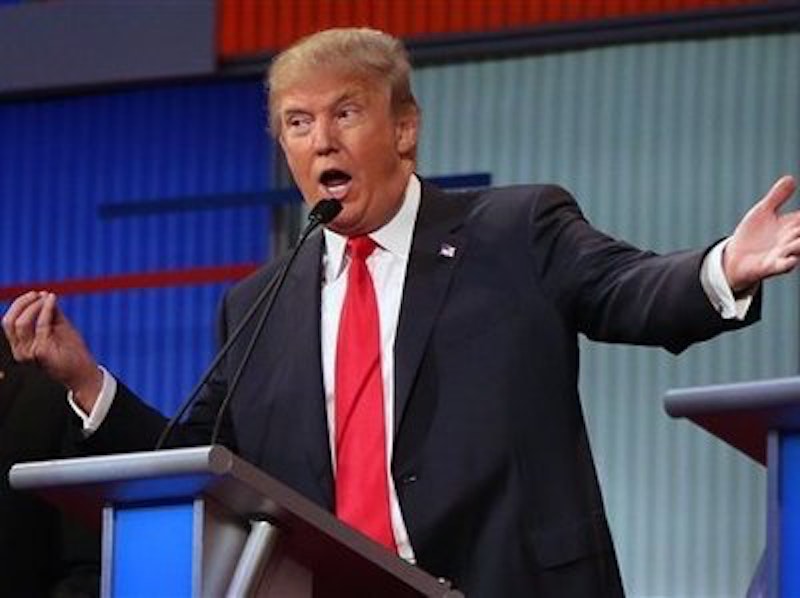 The most under-reported story of the presidential campaign season involves none of the candidates or a single early-primary state. It’s the tale of the yammering vertebrates who comprise the right flank of the modern Republican Party who are encouraging GOP candidates to seek the lowest common denominator of flame-throwing bluster and bravado.

By necessity as much as by choice, the media concentrates on the horse-race elements of campaigns and candidates. And they are mostly guided by polls, as well as by observation and reportage, as to which candidates they cover and how much space to allot. But polls are also a window on voters’ minds as much as a tout-sheet on which candidate’s in the lead.

The driving force of today’s Republican Party is operating at the intersection of politics and religion, usually a toxic mix, but in this case a one-size-fits-all simplistic solution to what ails the world, especially America. And the campaign rhetoric is fashioned more by the ears of the audience than the minds of the candidates. It is the speech-mill coarseness of nativism, racism, protectionism and, on many occasions, downright insults. The story speaks to what the Republican Party has allowed itself to become—a throwback to the era of George C. Wallace and Theodore Bilbo (both Democrats).

Donald Trump, Ben Carson, Ted Cruz and Marco Rubio, in interchangeable nip-and-tuck order, are the thunderclap candidates who play on the fears and prejudices of the evangelicals in Iowa and the flannel-shirt crowd in New Hampshire. They float on the gasses of the afflicted GOP fringe constituencies rather than the other way around. One person’s rights are another’s psychiatrist couch.

The candidates, in their pandering, attempt to out-perform each other in their vulgar re-creations of life in simpler times with simple solutions who see their lodestar as the “In God We Trust” inscription on the nation’s money. (The motto’s been there only since 1956, adopted when Dwight D. Eisenhower was president.) They hark to the Founding Fathers for solutions to racial problems, nuclear war, ISIS and the threat of China.

The prose of Donald Trump is the voice of Middle America, uncertain about the present, fearful of the future and longing for a past that will never return. Trumps campaign slogan, “Make America Great Again,” has many layers. Read into it whatever you will.

Nobody has yet out-shouted Trump. So far he has insulted women, immigrants, Iowa voters, Muslims, blacks, prisoners of war and even mocked a reporter with disabilities in his overheated speeches that seem directed to older, white, under-educated voters. What’s more, Trump claims to have witnessed thousands of Muslims cheering the destruction of the World Trade Center on 9/11, a claim that has been fact-checked and discredited repeatedly. In one sense, Trump-talk resembles the mock-bravura that rumbles across talk radio out to Wheatfields, USA and the cabs of rolling 18-wheelers.

In spite of it all, Trump remains at the top of the heap in every national poll, a phenomenon that has establishment Republicans baffled and unsure what to do except to let the ride play out, a dicey strategy. The more outrageous he speaks the higher he climbs in the polls.

Follow the bread-crumb trail of primary states to get a full sense of how the electorate creates candidates: First, Iowa, where 57 percent of those who participate in the GOP caucuses identify as evangelicals. They are the Biblical literalists who view the function of government through the absolutism of the Gospels in a theocratic mindset whose centerpiece is opposition to abortion and liberalism.

Evangelicals, or fundamentalists, make up 26.8 percent of the population, or about 94.3 million followers, and form a loose, but a powerful like-minded network, especially across the South and into other benighted states. The fundamentalist composition is broad and includes mainly Baptists, Missouri Synod Lutherans and conservative Catholics.

From Iowa, the primaries head to New Hampshire where part of the population is influenced by neighboring Massachusetts and the rest, for the most part, is rural and agricultural and a mix of the arts-and-crafts crowd that remained in that neck of the woods after Woodstock and turned conservative. And from there the GOP primaries head to South Carolina. Enough said.

But the big shakeout probably will not come until Super Tuesday, March 15, when a huge number of delegates will be up for grabs in what has become, effectively, a regional Southern primary. It’s preceded by a week by a couple of other Southern states. But the big prize is Florida, a winner-take-all state, which could be a game-changer with its motherlode of 99 delegates going to a single candidate. The Super Tuesday cluster of states includes Alabama, Georgia, Tennessee and Texas. (These are mainly proportional representation states.)

Much of Florida outside the Miami-Dade County axis is rural and conservative. And it should be noted that Trump owns Mar-a-Lago, the private club he developed at the former mansion of Marjorie Merriweather Post, itself a seaside architectural wonder at Palm Beach.

So the Republicans’ Super Tuesday will be the major winnowing of GOP candidates who make it that far. And some Republican strategists are beginning to acknowledge that Trump might win Florida and if he does that could end Rubio’s run for president and Trump might be unstoppable from then on.

It’s easy to see that the GOP primary sequence is mimicking the “Southern strategy” popularized by Richard M. Nixon and how the election calendar is shaping the rhetoric of the major candidates. It plays against the anti-black sentiments of the South and sets the South up against the urban states of the two coasts in a kind of uncivil war of words. Republicans may have cooked their own goose, though, because it’s a strategy that will not play well in the general election.

Trump is Trump, and nobody can one-up him. But that doesn’t mean they aren’t trying. Consider Rubio on the issue of abortion, a major rallying cry for evangelicals. In a speech denouncing Roe V. Wade and calling for its repeal by Congress, Rubio stated that whenever there is a conflict between God’s law and man’s, God’s law prevails. That may be great theology, but many have gone to jail for asserting that choice.

Ditto Cruz, whose father is a preacher, and who repeatedly conflates theology and politics in a verbal suck-up to evangelicals. But Cruz even goes Rubio (and Trump) one better: Cruz wants to abolish the agencies of government that evangelicals believe are corrupting what they consider American values.

Even in Maryland, two-one Democrat, with fewer than one million Republicans in a population of 5.6 million, the passive-aggressive Ben Carson leads GOP candidates in a recent Baltimore Sun poll. Carson’s thoughts, if not words, parallel Trump’s in Caron’s unintelligible jumble of theology and politics. Yet if Trump is the arbiter of this season’s campaign rhetoric and its standards of speech and declaration of values, it’s important to remember that not too long ago he was pro-choice on the issue of abortion, pro-gun control and in favor of increasing taxes on the rich, a total reversal of where he stands now.

Jose Ortega y Gasset wrote in The Revolt of the Masses that, “The command over public life experienced today by the intellectually vulgar is perhaps the factor of the present situation which is most novel.”

There’s no question that Trump has set the tone and the tactic for the GOP skirmish. In doing so, he has stretched the elastic boundaries of political speech to the point where there are no boundaries. Trump’s contribution to politics is that he has totally eliminated dog-whistle signals, code words and buzz phrases. It’s now all out in the open. And for that we can at least be thankful. Trump has become the tastemaker of our culture.