Cruz vs. Rubio: A Saner Fight 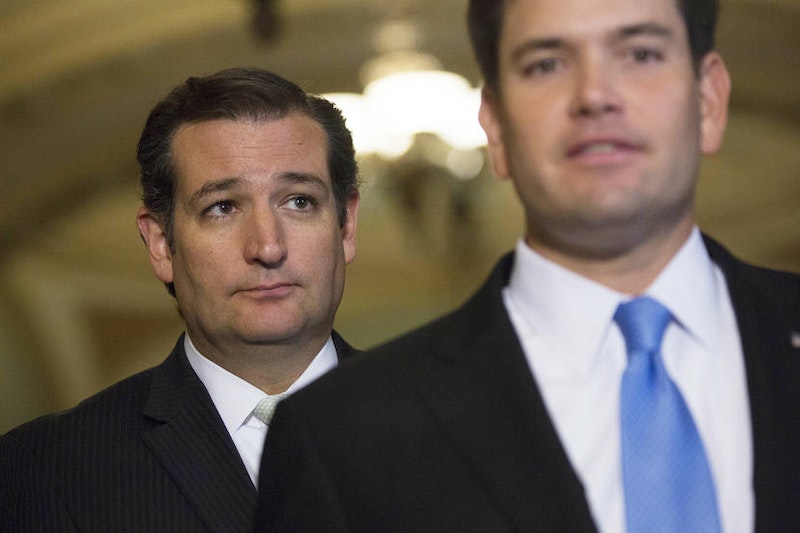 As I type this, my favorite major-party candidate, libertarianish Rand Paul, seemingly defying a basic rule of mathematics, is somehow polling even lower than Jim Gilmore among Republicans, down at about two percent according to Reuters. Note that the Gilmore presidential campaign has been called “non-existent,” though he may have gotten a tiny bump from calling Trump fascistic last week. (This poll doesn’t do much to help ensure Paul’s spot on the nine-person main stage at the December debate.)

This forces us once more to contemplate the quasi-libertarian fallback plan (at least until Gary Johnson enters the race): Ted Cruz. He’s not polling up at Trump levels yet but is above all the other Republicans for the moment (about 12 percent to Trump’s 38).

Maybe it’s all meaningless, but Trump, at least, perceives a potential rival. Back in March, Trump already hinted at the possibility of unleashing his birther henchmen against Cruz. Cruz was born in Canada, and Trump is perhaps the most famous person to hint Obama may have been born in Kenya, though Trump admits the courts would have to settle the issue of how exactly we define “natural-born citizen” (I of course think no one is qualified to be president).

Much as I wish we could blame exogenous factors such as collusion between Hillary Clinton and CNN (as described by Brian Doherty) for Paul faring poorly, I’ll assume for current purposes Republicans just don’t like him and never will. I’ll also assume Carson will continue to fall and hope against all evidence that Trump being a buffoon, liar, autocrat, and bully will eventually lead to disillusionment with his comedy act.

That would at least leave us with the usual neoconservative-vs.-libertarian internal Republican debate, with Cruz (though he is not a libertarian) constantly stressing free markets and constitutionalism while Rubio pushes every aspect of the Republican worldview I dislike with humorless gusto, from the war on drugs to the desire to fight with Russia over Turkey. Indeed, Rubio said, “the entire NATO alliance comes into question” unless we defend Turkey against Russia. Let us hope Turkey behaves well, then.

Rubio offers nothing that most conservatives should like, though, that Cruz hasn’t already got—and Cruz gets the GOP at least some libertarian(ish) votes. On the other hand, I’ve recently been made aware, slow on the uptake as usual with this sort of thing, that the ladies think Rubio is cute. And that could make all the difference facing a female Democratic nominee, of course. (What a stupid planet.)

But the best reason for neocons to cave ever so slightly and accept Cruz, rather than libertarians (somehow, implausibly) holding their noses and voting for Rubio may simply be that Trump could still beat both the conservative and the libertarians if those two factions don’t make nice and pick one candidate before Trump ends up with a plurality.

I’m still somewhat fond of the old “fusionist” philosophical project of blending libertarian and conservative thinking. Maybe the terrifying, stupid menace of Trump will be the thing that finally necessitates that highbrow dialectical hybridization project being realized in real life. Join or die.