Eight Key Points About Bill O'Reilly and George Will

Everything you need to know! 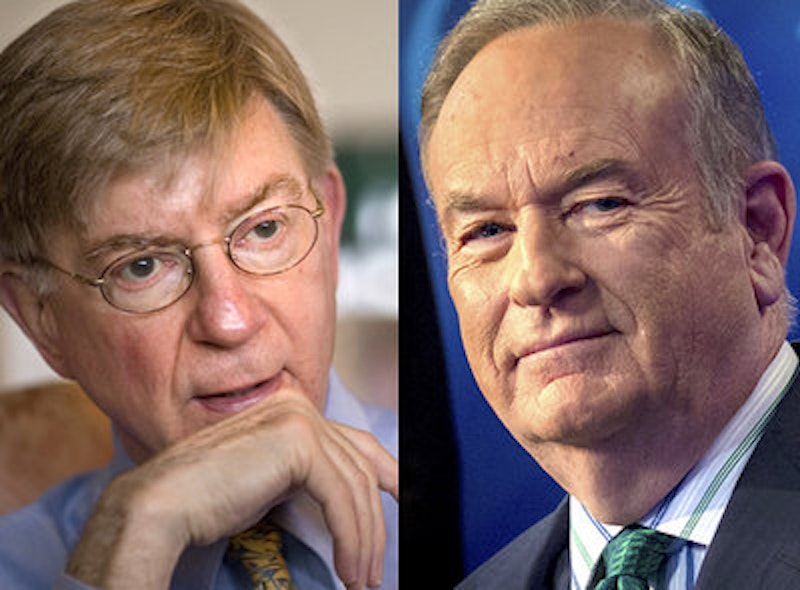 1. To commence. No matter what, George Will isn't stupid. Fatuous and dishonest, but not stupid. Bill O'Reilly is always stupid, no matter what. If he gets something right, it's because the thing fell on his toe.

2.  George Will and Bill O'Reilly have an average age of 70. “Did you call me?” demands O'Reilly. He and Will are hashing out the truth about Ronald Reagan, and this is O'Reilly's first question. “Did you call me?” he says. Will replies, voice even. “No,” he says, “and I didn't promise to call you.” Will pursues the thought. “You have my phone number and if you wanted to call me you could,” he says. O'Reilly has his answer ready. “I couldn't care less about it,” O'Reilly says.

3. Why are they fighting? Bill O'Reilly says Reagan almost got yanked from office, came this close. George Will says there was never a chance. O'Reilly says Will is “in with the cabal of the Reagan loyalists who don't want the truth to be told.” Will laughs at the idea that O'Reilly would know anything about the Reagan team and its doings. O'Reilly seems convinced that a crucial memo has been suppressed, because Will personally doesn't know where it might be.

4. Memo. Late in Reagan's second term, his fitness for office was assessed in a memo that gathered up disturbing stories about the President (lethargy, soap operas) and suggested the 25th Amendment might need to be invoked. Killing Reagan, O'Reilly's best-seller, says the memo resulted in a high-drama meeting where Reagan had to convince his aides that he was mentally sound. Will says no. Like the other Reagan loyalists, he says the memo was a false alarm. In this telling, White House aides backbit the President because Iran-contra had brought on a shake-up. They were getting fired and told the memos author (an outside consultant) a lot of nasty stuff. But the incoming chief of staff recognized the sour grapes for what they were. “The memo was presented to Howard Baker, Howard Baker took one look at it and said to the man who wrote it 'This is not the Ronald Reagan I know,' and that was the end of the influence the memo ever had,” Will says.

5. Does that settle it? No. Doyle McManus, one of the two reporters who broke news of the memo: “As the book reflects, the concern was real. Howard Baker did not dismiss it out of hand. Serious people were saying that the president wasn’t up to the job.” When he says “the book,” McManus means Landslide: The Unmaking of the President, 1984–1988, which he wrote with his co-discoverer of the memo, Jill Abramson. The book came out in 1988 and gave the first description of the crisis memo and the meeting to decide Reagan's fitness. But in 2015 Bill O'Reilly said he had uncovered the Reagan disability crisis. “We found out that he was within a whisker of being removed from the presidency and nobody knows that,” O'Reilly told Glenn Beck. This fact doesn't show anything about Howard Baker and how seriously he took Reagan's situation. But it does show you about Bill O'Reilly.

6. How does Will answer McManus? He doesn't. Nor, as far as I can tell, does Will claim that the fitness meeting (March 2, 1987) never took place. Maybe Baker called the meeting in a “What the hell” mood, as opposed to taking the memo seriously. Will doesn't have to address these points because his battle with O'Reilly is far more basic. He has to convince O'Reilly that it's a good idea, when gathering facts, to talk to people with first-hand knowledge. Will fails.

7. Bill O'Reilly doesn't let the facts confuse him. O'Reilly spoke to no one who served in the Reagan White House. “They have skin in the game, emotion in the game, spin in the game,” he says, his speech jingling as he heats up. “We don't talk to anybody who was derogatory to the Reagans, or anybody who was laudatory. We do our own investigation.” Will gives the obvious answer; people who were there would know something. Let's expand on his answer: Mr. O'Reilly, your whole case is founded on a memo that's based on interviews with people who had skin in the game. That's how things must be. Gathering the facts means listening to people who were there. Before, during and after the listening, you decide what you make of these people. A reporter or historian doesn't righteously cut them out to avoid contamination. Contamination is avoided through proper mental hygiene: examination of self and others for the bias that comes with being a finite human living out a particular chain of events.

He isn't listening, is he?

8. O'Reilly: for Reagan or against? Killing Reagan says Reagan came back. His handlers almost yanked him, but he hung on. He did better than that: he regained his mojo and ended the Cold War. “The book is laudatory,” O'Reilly announces to Will. He appears to be dictating down a wind tunnel: “LAWD-dah-tory.”

Will's position is that O'Reilly has no idea what he's talking about, which is true, and that the question of Reagan's alleged almost-breakdown is settled by the word of the people who worked for Reagan. This second bit isn't as true. Yes, James Baker, Ed Meese, and the others must be listened to. But their united opinion wouldn't settle anything. These guys are the sort to hoke up a story and stick to it real good. Reagan-Bush Republicans lie more than most political tribes, and they are better than most at hanging together. George H.W. Bush's last big act in office was to pardon half a dozen Iran-contra suspects ready to testify. When somebody finally got Ronald Reagan under oath, Reagan said “I can't remember” or “I don't recall” almost 90 times. Either he was doing some heavy protecting or his Alzheimer's had set in. But this was a year after he stopped being president, which brings us back to the crew of gray heads telling us that Reagan in office was compos mentis. Maybe he was, pretty much. He knew better than the other Republicans when it came to Gorbachev. But that's a low bar and I'm not entirely sold.