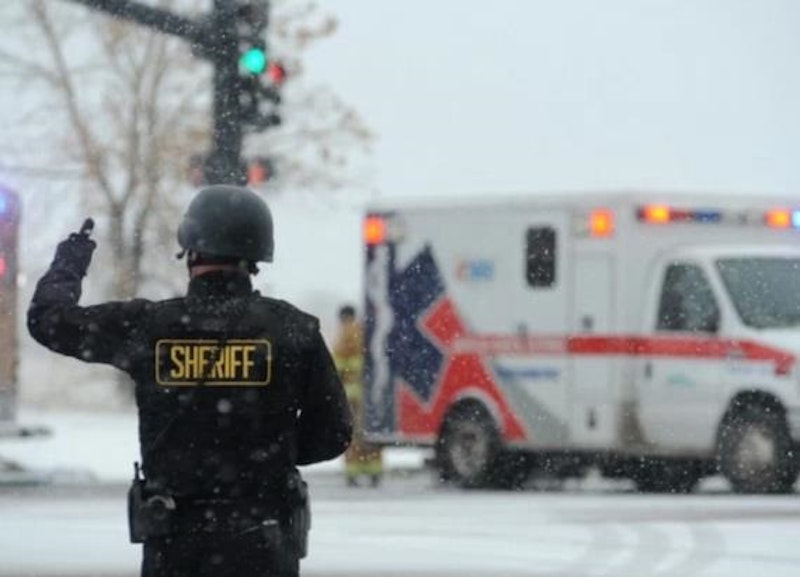 As I write this on Saturday, the day after the shooting at a Colorado Planned Parenthood, people are extrapolating wildly about what it all means. However, the most common narrative is that this is the latest in a “string” of killings at abortion clinics and the inevitable result of Republican pro-life and pro-gun sentiments.

In truth, there have been only two abortion clinic shootings this century, and it appears this one was done by an isolated, cabin-dwelling lunatic who reportedly had no prior interest in abortion or religion, spouted incoherent ideas, self-identified as female (beard notwithstanding), and was an unaffiliated voter.

But even if he turns out to be a former intern for Pat Robertson, I try to be consistent about not extrapolating much from any manifestly aberrant case. There have been shooters in recent years motivated by everything from gay rights to populist-libertarian sentiments, and from leftist to Muslim allegiances, often warped by mental illness or personal grudges. When they really did express active allegiance to some larger network of killers—as with the ISIS-sympathizing Garland, TX attackers—by all means study them to understand and blame a (carefully defined) broader group.

When it’s a lone nut, you may have to be satisfied lamenting that another lone nut arose. The last thing we should yearn to do in those cases is turn them into representatives of vast swathes of the national psyche. That’s a further injustice to their victims, not to mention everyone getting tarred with the same loony brush—and just bad statistics.

I’m reminded of the efforts to make the nutjob who shot Rep. Gabrielle Giffords and others out to be a product of the Tea Party. That got harder and harder to do as it became clear he was some sort of schizophrenic obsessed with the idea that some people are a threat to syntax due to unique veiled verbal constructions they use that undermine language itself. I don’t remember that coming up at any recent right-wing meetings.

At least with the jihadists, though some might well overreact or over-generalize, we know very well there are further attack plans of that sort afoot, likely perpetrated by the sorts of people who openly celebrated the Garland incident. Does anyone think, by contrast, that that kid who shot up a church in Charleston, SC has an army of close terror comrades waiting to do the same thing (not that there aren’t a few other similar isolated nuts out there)? Yet he was supposed to inspire guilt and soul-searching in every white American, we were told—whereas extrapolating too much from the real jihadists is of course morally irresponsible.

I say think of it all in terms of striving for accurate statistical filters and you’ll probably end up reacting better than if you find yourself huffing, “This is what they all want!” about anyone. Would you be willing to bet on who commits the next violent act, so to speak?

Meanwhile, if you want to see dangerous ideas being spread quite openly by well-respected, establishment individuals who’d no doubt say all the right, accepted things about how deplorable the Planned Parenthood shooting is, you need look no farther than, say, this video, featuring science writer George Johnson (in conversation with John Horgan), who laments people no longer having the political will to push mandatory population controls. If we passively accept sentiments like that being bandied about in public without shame and without speaking out against them, something tells me future incidents of regulation and other forms of mass violence may be inevitable. This is a threat far more common than the lone gunmen of the world.