Ted Cruz Rises Because Born-Agains Can Blow Your Mind

Paris causes Iowa voters to get serious about a jackass. 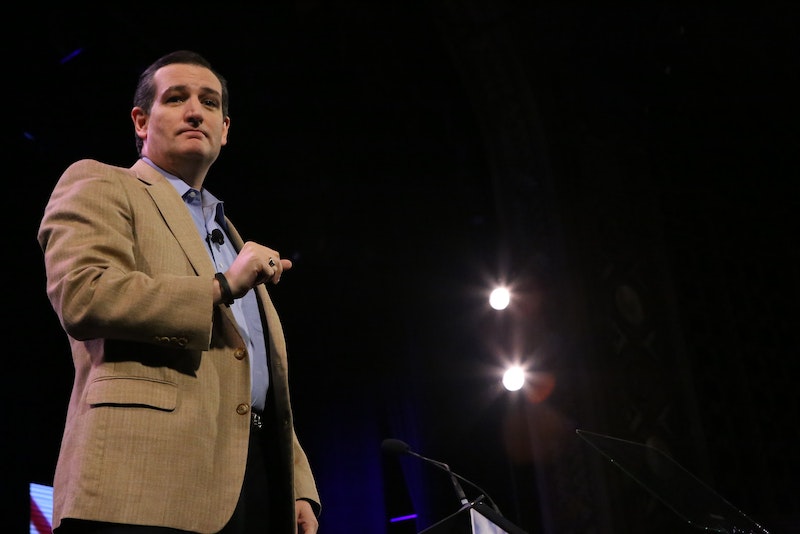 Ben Carson was edging out Donald Trump in Iowa, but now he's dropping and Ted Cruz is up. Quinnipiac is the latest poll to give the news. What did Carson in was Paris. Post-attack, hopeful old-school Republicans thought the base would finally stop larking about. But Trump is still on top. Only Carson has taken a hit. The soft-spoken, holy-minded ignoramus was fine as a pet rock and signifier of non-racism. But people weren't scared then, and now they are.

"In this day and age, with how important national defense is, with terrorism in the Middle East, you’ve got to be real studied,” says an attendee at the Family Leader Forum in Des Moines. The fellow backed Carson but now looks toward Marco Rubio. One reason is Carson's blinding lack of knowledge ("doesn’t mean he can’t get up to speed," the voter allows, "but he has some catching up to do"). Another... well, let Politico sum up what the forum attendees had to say: "In fact, the characteristics once cited by voters here as boosting Carson—his soft-spoken nature and disinterest in attacking his competition, for example—are now seen as problematic."

Rubio is supposed to be the foreign policy candidate. But he isn't born-again; that's Cruz. As a senator who’d born-again, Cruz wasn't as appealing to Iowa's voters as Carson, a non-senator who was born-again. Now the terror attack has flipped priorities. The non-senator is too much the holy man, whereas the senator seems dandy. "The momentum, according to activists, state lawmakers and other voters here, now appears to be with Cruz," Politico says.

One of the attendees at the forum explains. "He has experience, he’s shown what he can do,” she says. “With the state of affairs we’re in right now, I think it is very important. It’s vital… We need someone who knows the ropes, who’s not the establishment but who doesn’t need on-the-job training.” But Cruz has spent most of his career arguing law cases and making speeches. He's been in the Senate for almost three years, not quite, and he has spent his time there making noise. He likes to hold up omnibus spending or debt limit approval until his demands are met. But the demands aren't met and he gives way.

His demands don't even concern defense or national security. All his headlines have centered on domestic spending, Obamacare and the battle against the gays (that last being outside the Senate, though during his time as senator). Cruz had to fight hard for those headlines; they provided the little pile of prestige from which he mounted his campaign. Now Paris brings him a windfall based on the understanding that he's been up to something else altogether. It's bad enough that wingnuts would mistake this posturing loudmouth for some sort of rock in tough foreign policy times. But they can't even tell that foreign policy isn't his thing.

In 2008 a lot of Democrats looked at Barack Obama and thought, He's new but he's gifted, and he's black and not a Clinton. Maybe he's worth the risk. The born-agains of Iowa have no idea that a risk is involved. They think turning to Cruz means getting the better of risk. They look at him and think: He's a senator so he knows about foreign policy, and he's born-again so he's worth voting for. To put it delicately, their minds are crimped. They figure a good president has to be born-again, and they figure God must’ve made sure a good president would be on hand. So if resumes are necessary, then that born-again there with a resume must have a really good one. Ted Cruz gets remade as a wingnut version of Daniel Patrick Moynihan.

This shell game is the Iowa born-agains' idea of prudent deliberation. This shrugging imitation of a thought process is the best these dutiful citizens can bring to public life. Sure, they're not Trump voters, they aren't searching for rage outlets and emotional spasm. They think they're thinking. But they aren't and they can't tell the difference.