And why Chris Christie won't be president. 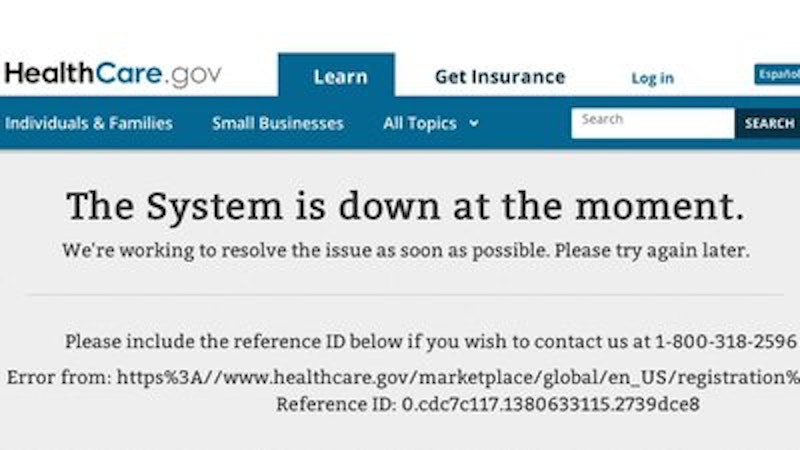 Two disasters have their inside stories being flashed in the press. One is the Obamacare site, which has various news teams looking behind the scenes and reporting how it got so screwed up. The other is the Romney campaign, which is autopsied in Double Down, the new book by Mark Halperin and John Heilemann. Available evidence indicates that members of the Obama administration are willing to stick up for their leader when talking anonymously with reporters. Meanwhile, the Romney team hates Gov. Chris Christie of New Jersey, the man they passed over for vice president. They'll say all sorts of things about the guy.

The Washington Post reports that the very day health care reform was enacted, President Obama told his staff they had to get busy implementing it the next day. He was right, of course, and he was right when he told his health team over and over that the federal exchanges had to work. The Post, quoting somebody nameless: “No matter which aspects of the sprawling law had been that day’s focus, the official said, Obama invariably ended the meeting the same way: 'All of that is well and good, but if the Web site doesn’t work, nothing else matters.'”  Obama is at least on record being prescient and understanding the nub of the situation. He just didn't manage to get the site working.

As it turns out, the law creating Obamacare has a serious gap. “Although the statute provided plenty of money to help states build their own insurance exchanges,” the Post tells us, “it included no money for the development of a federal exchange,” a need that became more pressing as Republican-governed states declined to create exchanges. Why didn't the bill have the money? The Post doesn't say. But with the act as it was, the administration couldn't scare up any funds for the federal site without inviting attack from Republicans, a factor that appears to have been prohibitive.

Instead work on the site had to be done wherever an existing office had the money to spare and a vague relevance to the task. The person overseeing the job was the chief operating officer of the Centers for Medicare and Medicaid Services. She was just stuck with it. “Implementing the exchange was one of 39 things she did,” says a “former administration official.” The result, as the source puts it, is that there was no one who could say, “'My job is the seamless implementation of the Affordable Care Act.’” We now have a system whose parts don't fit together.

As the Post presents it, Obama's people operated in a defensive crouch. They didn't want to release diagrams of the new system or to tell states what the exchanges should be like, and they waited until after the election to issue such useful regulations as the standards for what health insurance policies would be legal under the new law. In each case the administration was trying not to give ammunition to the Republicans, who now have the best ammunition of all: a system that doesn't work.

Two assholes, fat and thin. Mitt Romney, that inauthentic man, finally went with his gut in the search for a running mate. He settled on Rep. Paul Ryan, the boy wonder who wants to hack away at Medicare and discretionary spending. Halperin and Heilemann, the authors of Double Down, report that Obama just didn't get the choice. Romney was supposed to be running against Obama's so-so economic record, and instead he was setting himself up as the opponent Obama wanted—a man who promised to take away any good thing that government happened to give ordinary people.

Double Down, as excerpted in Time, says Romney chose Ryan on the basis of vibes. Ryan was spruce and deferential, comfortable things in a young man who must be around an old man. But his showing as a running mate was so dim that most of the Time excerpt is given over to the man who didn't make the cut. This was the physically gargantuan and extremely vocal Gov. Christie of New Jersey.

Two things emerge from the material. First, Mitt Romney is a snickering asshole, as in: “'Oh, there’s your date for tonight,' he would say to male members of his traveling crew when they spied a chunky lady on the street.” He's the same little shit who led his pals in a quasi-gangbang of their unfortunate high school classmate with the nelly haircut. Second, Chris Christie is either an asshole or somehow persuaded many, many unnamed members of the Romney campaign team to pretend that he is.

What a picture they paint: high living on the government tab, a shady past as a securities lobbyist who wanted an exemption from his state's consumer fraud act, a brother who had to settle with Securities and Exchange Commission for ripping off investors, even “a family foundation whose activities and purpose raised eyebrows among the vetters.” Christie pushed Romney's team around when it came to fundraising, he kept Romney waiting at campaign events, and he insisted that the campaign pay for “private jets, lavish spreads of food, space for a massive entourage.”

Christie may now think he's a candidate for president. If so, his well-wishers on the Romney team have given him one hell of a character reference. “The vetters were stunned by the garish controversies lurking in the shadows of his record,” Halperin and Heilemann say. The fellow in charge of the veep search goes on the record to say, as the writers paraphrase, “If Christie had been in the nomination fight against us, we would have destroyed him—he wouldn’t be able to run for governor again.”  Good luck, Governor. Your buddies haven't got your back, but they just got you back.