Virginia can be cool and hip, but it needs to stay out of people's pants. 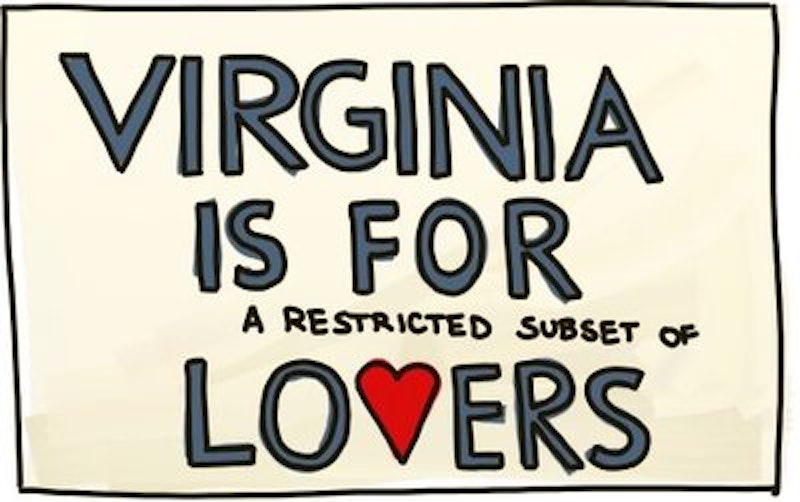 I don’t understand Virginia. On Tuesday, as the election returns were reported, I sat at my computer, refreshing The New York Times page every 28 seconds, hoping and praying that Terry McAuliffe, the Democratic candidate for governor, would be on top. But for most of the night it looked like the victor would be conservative Ken Cuccinelli; McAuliffe didn’t win until pretty much the very last votes were counted. I kept telling myself, “If these people voted Cuccinelli as governor, I don’t know what I’m going to do.”

Let me explain something to you. I live in the City of Richmond, right behind Broad St. in a gentrifying neighborhood that is still largely black. When I head out to where I work, the drive through leafy, suburban Richmond is filled with Cuccinelli yard signs—some of them small and delicate, others of them roaring and insistent. Every time I saw a sign for Cuccinelli I kept wondering why anybody would vote for a man who has worked vehemently to revive medieval sounding anti-sodomy laws, which would make blow jobs and anal sex illegal for all, a society I do not want to live in.

I know that McAuliffe isn’t the best Democratic candidate, and maybe his tight win was more a commentary on that fact that people weren’t so hot about him in the first place. I watched the debates, and they were dismal. It became immediately clear to me why people would be interested in Cuccinelli, because I couldn't follow anything McAuliffe said. He was rude, ineloquent, and it was Cuccinelli who came across as cool, composed, intelligent and even likable. And it’s a hard task to like the guy who doesn’t like blow jobs!

Sometimes I think Virginia is pretty OK. There’s a thriving arts scene in Richmond, and most any band worth their salt makes a pit stop in Richmond. If you come here the first thing you’ll probably notice is that the city does feel kind of cool and hip, and this is really clear if you go to a concert at The National, where all the cool kids are. Last weekend I saw one of my graduate school advisors at a French Studies conference that landed in Richmond, and the first thing he said to me was, “Wow, Richmond seems kind of cool and hip.”

I won’t be too negative, though. Richmond is cool and edgy and hip, also racist, but this is the same place with a mayor who somehow thinks that building a stadium downtown—not to mention on slave ground— is going to magically rejuvenate and bring economic success to the city once and for all. Question: when has a stadium fully rejuvenated any city, anywhere? It hasn’t because nobody wants to live next to a stadium. Nobody. All stadiums do is create chaos and act as a playground for drunken bros.

Then I was having a drink with a faculty member at Virginia Commonwealth University, one of the primary economic engines in downtown Richmond and a huge reason for the city’s “coolness,” and she told me that VCU is a great place to work but because the University is public, she doesn’t get partner benefits for her and her partner (a woman).

There’s a by-now ancient advertising slogan in Virginia that says, “Virginia is for Lovers.” And every time I see one of those black stickers with a red heart on it stuck to the back of someone’s pick-up truck, all I can think is, “Yeah, if you’re a white conservative heterosexual aging male who doesn’t like to have any fun!”