The governors of Maryland and New Jersey are a study in contrasts. 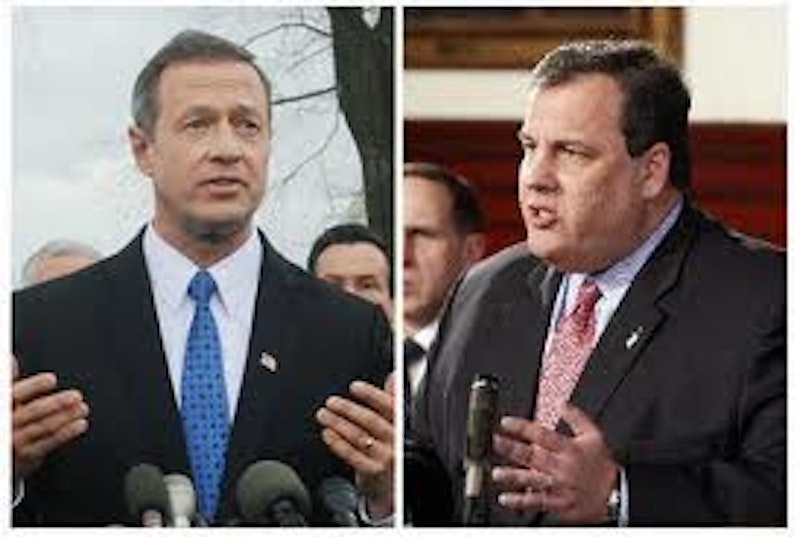 While last week’s scattered off-cycle elections may have settled little else, they did set up a potential East Coast regional clash between two titanic egos with competing presidential ambitions—Gov. Martin O’Malley of Maryland and Gov. Chris Christie of New Jersey. The two men, who’ve been snarling at each other for more than a year, have low regard and high dudgeon for each other, at least stylistically, promising the proud and the profane in a single election package.

O’Malley, a Democrat, wasn’t on a ballot, but Christie, a Republican, was. And Christie proved himself a long-distance candidate by paradoxically stitching together a broad coalition of blacks, Hispanics, union members and women in a majority Democratic state where he’s a moderate in public but a conservative in office and President Barack Obama won easily in 2012. O’Malley campaigned in New Jersey for Christie’s Democratic opponent, State Sen. Barbara Buono, who Christie defeated by more than two-one.

Christie’s impressive reelection vaulted him to the top of the Republican Party’s list of presidential candidates for 2016, elbowing aside, for the moment at least, the Tea Party’s Senate favorites such as Ted Cruz, Rand Paul and Marco Rubio. Christie’s victory lap included appearances on the Michael J. Fox Show, Meet the Press, Face the Nation and Fox News Sunday. At the same time, O’Malley launched a petition drive on his national website to win support for raising the minimum wage in Maryland.

But Christie cheated by rigging election dates. He spent millions of taxpayer dollars on a special U.S. Senate election in mid-October—three weeks before New Jersey’s regular November election—so he wouldn’t have to appear on the same ballot with Newark Mayor Cory Booker. Christie was afraid that a large black turnout for Booker, a Democrat, would undermine his own election.

O’Malley’s career path depends largely on Hillary Clinton’s decision to run or remain forever frozen on a pedestal as one of America’s most admired woman. O’Malley, a Clinton supporter in 2008, could be positioning himself to wind up as understudy on her ticket.

O’Malley is a true-blue Democrat in an emblematically blue state with one of the most progressive records in the nation. He led the way for gay marriage, ended the death penalty, adopted Maryland’s version of the Dream Act, pushed through tough new restrictions on gun ownership, raised taxes on millionaires (and everyone else) and has a green-thumb’s record on the environment.

And to torque up the competition between the two, Christie is about to become chairman of the Republican Governors’ Association whereas O’Malley served two one-year terms as head of the Democratic governors and remains chairman of its fund-raising operation. O’Malley’s handpicked personal appointee, Colm O’Comartun, remains executive director of the DGA. Those positions give both men not only a national megaphone but the cachet to speak for their respective parties.

The parallels continue. Both men are former prosecutors, O’Malley at the municipal level and Christie as a U.S. attorney with a record for crime-busting in a state with a reputation as being a haven for the Mafia. O’Malley is a former City Council member as well as two-term mayor of Baltimore. And Christie was a Republican member of the Board of Chosen Freeholders of Morris County (a councilman.) Twice while a Freeholder Christie was sued for defamation for inappropriate statements, according to local news reports. Christie was also a lobbyist for New Jersey utilities and other special interests before becoming governor.

Modesty does not become them. Neither O’Malley nor Christie blushes at the media attention or the mention of being considered presidential material. O’Malley for a long while shrugged off such blandishments. But about six months ago, after two years on the talking-head circuit of TV shows that boosted his national standing, O’Malley publicly acknowledged that he was laying down plans to explore a presidential run. Simultaneously, he established a federal political action committee, O’ Say Can You See.

For his part, Christie said following his landslide reelection that he finds all the presidential mentions “flattering,” but that his immediate intention is to serve as governor—the usual fingers-crossed rejoinder to conceal run-away ambition. Christie’s fortunes rose and fell simultaneously when he was viewed in the detritus of Hurricane Sandy strolling on the Jersey Shore’s devastated beaches with Obama.

Democrats applauded the optical illusion of bipartisanship at a time of hard-headed partisan gridlock in Washington while Republicans fumed over what they considered an act of betrayal in the middle of a presidential election. To this day, Mitt Romney blames the visual images of the two men, in part, for his loss to Obama. A few days later, Christie attacked Speaker John Boehner (R-Ohio) and House Republicans for holding back legislation to grant federal disaster aid to storm-ravaged East Coast states.

Contrasts are important in political imagery. O’Malley is tall, athletic and fit, an admitted mesomorph who pumps iron regularly and who as a guitar-strumming vocalist in a black muscle shirt leads a Celtic rock band. Christie could serve as poster-boy for an anti-obesity campaign. His weight is estimated at about 350 pounds, more or less, and several months ago he had stomach band surgery to help reduce his waistline, although to this day with no visible results.

Probably the only thing O’Malley and Christie share is a profound love of the music of Bruce Springsteen. Christie claims to have attended 130 Springsteen concerts. A pre-election poll showed that Christie is more popular than Springsteen in New Jersey.

There is no question that O’Malley is in good standing among Democrats and especially the Obama White House. He has campaigned across the country for Democratic candidates for governor, with little success at increasing their numbers. He has a swatch of chits, though, for his efforts.

Christie is concerned only for himself and for his state, in that order. And he has, most recently, been attacked by conservative purists (Sean Hannity, Rush Limbaugh and Ann Coulter) for refusing an invitation to campaign for Ken Cuccinelli in Virginia, who narrowly lost the governor’s race to Democrat Terry McAuliffe.

Within hours after Christie’s reelection, Democrats as well as Republicans were piling on doubts about Christie’s acceptability as a national candidate. Hear O’Comartun, in The Washington Post, O’Malley’s cheerleader at the DGA: “What’s worked for [Christie] has been to make sure that nobody talks about the issues, that people just get consumed with his personality-driven late-show entertainment. People will see past the bluster and the vaudeville routine that is the Chris Christie show. They’ll focus in on issues.”

O’Malley has said that Christie “delights” in being abusive toward public employees. To which Christie rejoined: “I heard that pabulum Governor O’Malley was spewing down in Maryland.”

But Christie’s ascent compounds problems for Republicans. Christie is viewed by many mainstream Republicans as their best hope to capture the White House in 2016 and re-take the GOP from the Tea Party fringe.

But the GOP’s Tea Party base considers Christie a moderate by their rigid standards of conservative purity and hostility toward government and unacceptable as a presidential candidate. Christie has a tough slog ahead. O’Malley’s problem is different: He’s in line behind a sure thing if Clinton wants the nomination.

Oooops! Last week’s column stated that Attorney General Douglas Gansler had in the past been censured by the Attorney Grievance Commission for violating the rules of professional conduct. In fact, he was reprimanded by the Maryland Court of Appeals.