The Pope and the Kid

The world sees a child run toward a priest instead of away. 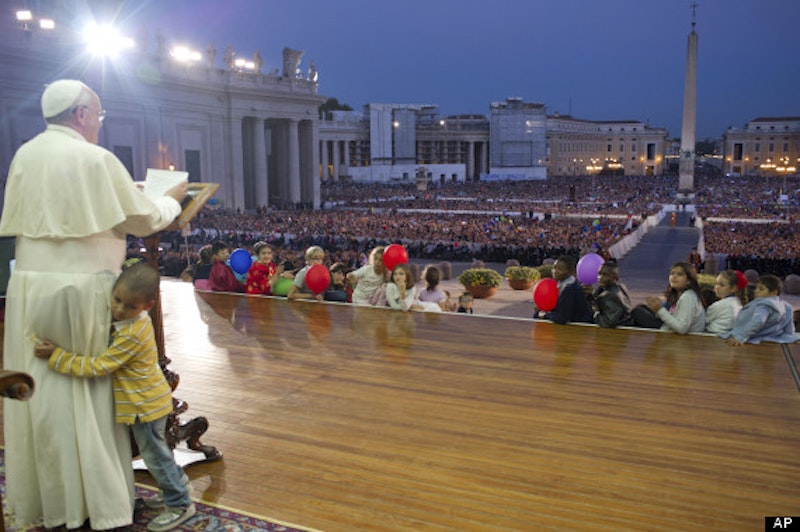 Are you sure that business with the kid and the Pope was real? I guess it was. The Pope did a little beaming and twinkling, but not much. On the whole he acted like a man who was dealing with a distraction. Not getting fussed about it, of course, but not radiating sunbeams. The look on his face was generally one of “Okay, kid, but do you mind? I have some work to do.” Another touch of realism was the flunky who offered the kid some candy to get him off stage.

The business between the Pope and the boy happened at a big gathering outside the Vatican. The Pope was on stage, presiding over the faithful, and the boy sat near the stage with a group of other kids. The kid, who is eight or nine, decided to climb up and join the Pope, after which nobody could get rid of the boy without manhandling him. Accordingly, the kid frisked here and there while the scheduled events proceeded. At one point he sat on the Pope's chair because the Pope was at the microphone, delivering some remarks. To put matters differently, the Pope allowed a small child to seat himself on the throne of the Church; meanwhile, the whole world had a chance to see.

Here's another moment. The child stood with the Pope at the microphone, head bowed out of reverence or because the Pope's hand was resting affectionately on his scalp. If you ever want to see an iconic photograph, this one will do. It looks like a couple of regular human beings—one of them a patient man in Pope garb, the other a boy in blue jeans, sneakers and striped jersey—decided to enact a calendar illustration showing the Church's ideal role as protector of the small.

After the child abuse scandals, the moment seems too good to be checked and therefore too good to be true. But what a plausible, realistic staging the alleged stage managers hit on. We're left with the possibility that the new pope is someone who just has things like this happen to him. Kids like him, and he can deal with it when they want to share the bright lights and the roar of the crowd.

Typical liberal comment. This is verbatim except that I ran the paragraphs together. From a thread at Balloon Juice during the government shutdown: “It’s been a while since I’ve tasted ambrosia and nectar, also known as the tears of a Teabagger. It’s delicious, and I love it. Fill my goblet with another serving, please. That said, if they do not get their shit together by Wednesday, it’s time to go Zeus on their ass, lightning-bolt style.”

I think that is so bad—not the attitude, just the writing. He's saying that it's good to see the Tea Party suffer, but that we cannot tolerate having the standoff go past Wednesday. All right, but atop this he drops a load of stale frosting:  “go Zeus on his ass,” “ambrosia and nectar,” “tears of a Teabagger.” To him that's the writing part, and he really wants to write.

Tens of thousands of Internet comments are written in the same butt-fucked tone of voice, strangling from special touches, every simple idea converted into a waste-of-time paraphrase. I mean tens of thousands of liberal comments; conservatives don't do this crap, from what I've seen. But every liberal seems to think that high flying is the purpose of prose and that he or she is ready to fly.

Fucking agnostics, they're a pain in the ass. I took part in a terrible online brawl about agnosticism. Everybody taking part was agnostic, but none of us could agree to disagree. The problem was that each of us wanted to be the one who sees, the clear perceiver. That's the claim you stake if you're an agnostic: not that God exists or doesn't exist, just that you've got a good line on reality's fundamentals and can wave aside bootless questions about a creator. Put a bunch of us together and we get fretful. There's no easy way to look about and say, “They don't get it, but I do.” Bad temper breaks out.