But they should be more transparent about their rules. 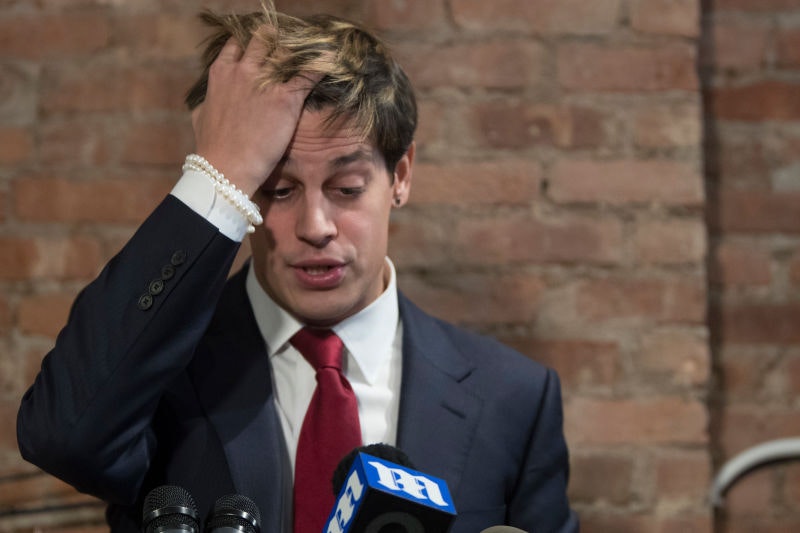 Earlier this week, The Guardian reported that Milo Yiannopoulos, the right-wing “provocateur” whose time came and passed, is currently broke, and owes creditors more than $2 million.

The news set off a stream of snickers from Milo’s detractors, and also outstanding jokes, with ex-MTV host Dave Holmes pointing out that Milo was “the one person who went broke underestimating the intelligence of the American public.” Reporter Joe Bernstein of BuzzFeed revealed that most of the sources he’s had for Milo stories over the years have come from former associates who Yiannopoulos had refused to pay.

But it was also noted that Yiannopoulos’ fall can be traced back to the summer of 2016, when a harassment campaign he led against actress Leslie Jones led to his permanent ban from Twitter. His comments about pedophilia a few months later pushed him down even further, but Milo’s departure from Twitter was the beginning of his end as any kind of consequential figure.

In a season when there’s been a lot of hand-wringing over Twitter kicking people off its platform, coupled with Laura Loomer’s insane stunt in which she protested her own ban by handcuffing herself to a Twitter office building in New York, Milo’s predicament makes something clear: Twitter has a solid record of banning users who deserve to be banned.

The platform in recent weeks has kicked off such figures as the alt-right-adjacent pretend journalist Loomer and the frothing Pizzagate/QAnon conspirator Liz Crokin, as well as conservative pundit and veteran Jesse Kelly (who was later reinstated.) Twitter has also cut down on abuse against transgender people, including those who misgender or "dead name" trans folks, which led to the banishment of Canadian feminist Meghan Murphy.

This, as well as the tossing earlier this year of Alex Jones, has led to a huge backlash against Twitter, mostly from the right. It's been called censorship, "Soviet-style tactics," political bias in targeting of conservatives, and has drawn threats of lawsuits, with incoming Sen., Josh Hawley of Missouri even threatening a Congressional investigation.

It’s overblown. Twitter is a private company, free to throw off anyone it considers to have violated its terms of service. It's also not a company that's touted an anything-goes ethos of free speech absolutism like, say, Reddit did for many years.

Starting with Milo two years ago, banning its worst users has unquestionably made Twitter a much better place, and if anything, the platform has historically been too slow to ban people, as opposed to the opposite. The Twitter of 2015/2016 was full of avowed Nazis, throwing around threats of violence and sending their enemies pictures of gas chambers, sometimes with the target’s children photoshopped in. It took a lot of complaining, but eventually Twitter did the right thing and banned many of them. That garbage is now confined to Gab, where it belongs.

There are very few people who’ve been banned permanently from Twitter who didn't deserve it, or have been especially missed. And if all of your favorite Twitter users have been kicked off the platform recently, that likely says a lot more about you than Twitter.

Furthermore, it's never been true, at any point, that Twitter is targeting “conservatives.” They didn't toss Milo, or Chuck Johnson the year before, because they were conservative. It was because they organized harassment campaigns and they made violent threats respectively. Those on the right not prone to threats, harassment, and elaborate trolling campaigns have managed to escape the ban hammer. And there have been plenty of Twitter bans against leftists, including the group (Smash Racism DC) that organized the recent protests of Fox News host Tucker Carlson's home.

In fact, following their bans, Jones, Johnson and Milo all launched self-aggrandizing martyrdom campaigns, although to their credit, unlike Loomer, none of the others ever donned ostentatious Holocaust garb while doing so. There's no reason why Twitter bans have to evenly fall on users of the left and right, as all that would do is appease a bunch of bad-faith axe-grinders who aren't interested in appeasement.

It's also hard to argue that Twitter isn't better without the QAnon-addled Liz Crokin, whose presence consisted of little besides baselessly accusing virtually everyone of being part of a pedophile conspiracy. Crokin was probably the most batshit person on Twitter, but being the most batshit person on Twitter is sort of like being the oldest person in the world: it's a title that no one ever holds for very long.

Twitter could probably be more transparent about their rules and why they're banning people. If leftists make violent threats or otherwise violate the terms of service, toss them too.

But you know who shouldn't ever be banned from Twitter, despite the protests of a lot of people on the left? Donald Trump. Trump's Twitter feed is like watching Nixon White House tape transcripts get posted in real time. He's already had numerous court decisions go against him based on what he's tweeted, and the odds of a tweet someday leading to articles of impeachment are far from zero.

Twitter’s not perfect. But it's clearly done less damage to the world than Facebook, and for all its problems, being too quick to ban people is not one of them.