That Time a Critic Destroyed a Satirist On TV 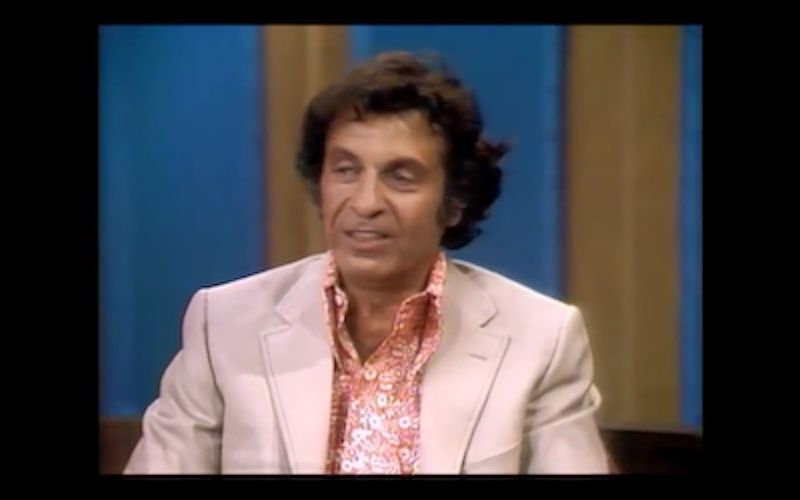 More than a generation ago, TV talk was raw and unfiltered. Now, with Jimmy Kimmel, John Oliver, Samantha Bee, and Trevor Noah dominating the scene, it's more self-righteous and smug. Talk shows were once capable of providing legitimate thrills, whereas now they're comfort blankets for late-night viewers irate from another day of Donald Trump news.

Anything could happen on The Dick Cavett Show. Norman Mailer once head-butted his rival Gore Vidal in the green room. Comic and social satirist Mort Sahl, the first comedian on the cover of Time, made a 1971 appearance on the show that turned into one of the great TV meltdowns off all-time.

Sahl, the guy Steve Allen said was "the only real political philosopher we have in modern comedy” came out swinging against women with this vicious rant: “That whole women's liberation thing is really incredible, when they equate words like ‘sexism’ with ‘racism.’ I’ve never met a woman who's an intellectual. I've met a woman who will wanna come on with me. She'll come on with me using the currency of the moment. If that currency is Confederate scrip instead of real money. If it's politics then she’ll talk about politics.”

Cavett gave some examples of intellectual women, adding, “Some years back you said a woman’s place is in the stove.” He asked Sahl if there were any intellectual women, to which his guest responded, “There are no intellectual women. They get a couple of stickers on their Volkswagen, a couple of daisies... and then they're intellectuals. They're really not interested in what's going on.” One can only speculate what experiences (i.e. rejections) the Canadian-born satirist had had with women to provoke such bitterness.

Cavett then introduced prominent, and feared, theater and movie critic John Simon, who he called “Bad John” for reasons that were soon revealed. The host asked the critic if he was still in search of an intellectual woman, and Simon replied that he'd known many. Sahl asked if any of them were actresses, and from that point on he was talking to Bad John.

“Perhaps not,” said Simon. “No, but probably as many intellectual women as intellectual ex-nightclub comedians.”

Sahl looked like a jellyfish had just dropped into his lap. “Bad manners don't work anywhere, even on television,” is all he could muster. Simon replied, “I think condemning an entire sex to the darkness of unintellectualism isn't exactly the best of manners.”

“We were talking about actresses and we didn't condemn Simone de Beauvoir,” said Sahl, although he hadn't made such a distinction in his misogynistic ramblings, and it wasn't “we.” Futilely trying to go on the offensive he said, “But why talk about the world and important things when we can talk about the movies?” Simon said that he also did literary criticism, book reviews, and art reviews. “I think the world of art is a legitimate thing to talk about, yes,” he calmly noted.

It was time to get out the smelling salts for the great wit who’d been called the new Will Rogers. Cavett said there must be some movies that had something to do with life, and the comic pretentiously replied, “I can think of four. The Damned and Z and Willie Boy and The Battle of Algiers.” Recent films at that time included 2001: A Space Odyssey, Lawrence of Arabia, 8 ½, Breathless, and Cool Hand Luke.

Sahl then went on an anti-gay rant. “I've never seen anyone who's poor and homosexual, they do very well,” he told Simon. “They indulge themselves. They make a great deal of money in the arts.”

“I finally found out what it is, John,” said Sahl. "You have no sense of humor.”

“If having a sense of humor is doing what you do,” Simon replied, “then I'd just as soon not have it, thank you.”

Sahl told Simon that he'd denigrated all the fans of his comedy, which was pathetic. The iconoclast comedian, morphing into the guy he'd made a career out of mocking, then claimed that Simon had sworn at him during the break. “If you weren't on television you get punched for swearing at people,” he said. Although Sahl couldn’t say what the word was on TV, it appeared that the fearless slayer of conventional thought who was said to have inspired Lenny Bruce was outraged over the word “shit.” Simon calmly called attention to the irony of that.

Actress Alice Playten joined the group and Cavett jokingly told her that she needed to defend her gender, to which Sahl added, “They can be first class girls, they're just second class guys. They're great at what they do—intuition, compassion, insight, all of that.” Sounding addled, he then asked his fellow panelists, apropos of nothing, what they planned to be doing in five years. They laughed him off with flippant replies, like he was a bratty child. The humiliation of the great Mort Sahl was complete.

A number of things come to mind watching this old talk show chestnut, including how great TV could be back in the 1970s. And then there's the irony that a guy known for nastiness to women (sample quote: “I always thought Liza Minnelli’s face deserving of first prize in a beagle category.”) smacked around a major comedian for denigrating half the people on earth, exposing him as a mean, petty man with psychological issues.

Sahl raged hot and red-faced in a “cool” medium that day against an opponent who never broke a sweat. The satirist had gotten away with a lot for a long time, but he went on TV with the wrong guy—someone who took people apart with his savage pen for a living who also happened to relish doing it to a person’s face. Had he been a decent person, you might’ve felt sorry for Mort Sahl.